William Burgdorf: We say goodbye to a wonderful writer

He could tell a good story. And the stories kept on coming. Bill was always writing a new book by the time he finished his last one.

It is the season to be merry.

I lost a good friend.

It’s the season of joy.

I lost a good friend.

William A. Burgdorf has left us.

I knew him as Bill.

I knew him as a larger than life character who loved to write Westerns.

He could tell a good story.

And the stories kept on coming.

Bill was always writing a new book by the time he finished his last one.

I met Bill Burgdorf when he attended a series of my writing classes at Tyler Junior College.

He desperately wanted to be a writer.

The ideas for books were part of his every sentence.

He wrote and published eight books in a year: The Arizonan, The New Mexican, Company A, Humps and Hooves, Red River Station, Barbed Wire, Repentance, and The Westerman Tales.

Looking back, I wonder if he knew, without really knowing, that he didn’t have a lot of time left, so he worked to turn out as many books as he could before the end caught up with him.

He was a big man.

He had a big smile.

He had a booming voice.

And the twinkle never left either eye.

When God invented the friendly face, he gave it to Bill Burgdorf.

By the time he shook your hand, you were a friend of his for life.

He loved the stage.

He was a fine actor.

A year ago, Linda, our grandchildren, and I watched him play Uncle Billy in the classic: It’s a Wonderful Life at the Tyler Civic Theater.

If he was in a scene, he stole it.

He was trained reading scripts, and he wrote his books as if they were scripts.

He wrote in present tense

He set the scene.

And Bill jumped straight to the dialogue.

He was enamored with writing dialogue.

He was good at it. 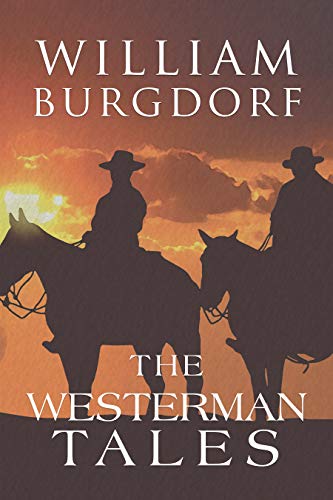 Bill Burgdorf wrote Westerns because he was raised in Arizona.

He loved the land.

He loved its history.

He admired a tough and courageous breed of men and women who came by wagon and horseback into a hard, hostile, inhospitable but beautiful country.

They never tamed it.

They did civilize it with their blood, tears, determination, hard work, and tenacity.

Bill Burgdorf could have been one of them.

Last week, I showcased his newest book, The Westerman Tales, on our Website.

It is three Western novellas rolled into one book.

Burgdorf is a brilliant storyteller.

He can frighten you.

He can leave you feeling uneasy.

He can make you laugh.

He writes so vividly you can feel the heat of an unrelenting sun and taste the dust kicked up by thousands of cattle.

If you like mysteries, westerns, and rip-roaring adventure in another and glorious era, you’ll forever remember the time you spent riding from page to page in The Westerman Tales.

When the week ended, he saddled up his horse for the last time, rode away, and was gone for good.

I miss his stories.

I miss the ideas he had at our critique group meetings.

I miss his advice.

I miss his inspiration.

I miss his leadership as vice president of the East Texas Writers Guild.

I miss the encouragement he gave to every writer he came across.

But I am so thankful that once upon a time, Bill Burgdorf came our way.

Just thinking about the good times we had with Bill, maybe the season is merry after all.

He brought joy to everyone who fell within his broad shadow.