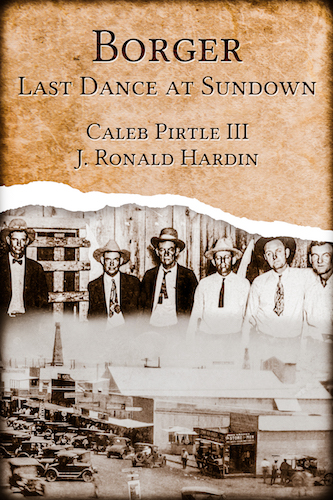 Review: A narrative nonfiction story that unmasks an unruly town during an unruly time, written with the spirit and power of a novel,

I have always been fascinated with the search for oil.

I was a child of the great East Texas oilfield.

I grew up in a boomtown.

My curiosity wanders down every road I can find when there’s a pumpjack coaxing oil from far beneath the earth.

It was a boomtown.

It was known as the wickedest town in Texas

At long last I have had a reason to write about Borger.

And I owe it all to J Ronald Hardin.

He presently lives in Wichita Falls.

But back in the late 1950s, he was living in Borger and serving as advertising director of The Borger News Herald.

He was fascinated with the trials and tribulations of early Borger.

Every night, he would sit at an old manual typewriter and type out stories that had appeared in the newspaper between the wild years of 1926 through 1929.

What would he do with them?

Thanks to a mutual friend, Don Newbury, he called me.

Would I be interested in writing a book on early Borger?

And today we would like to introduce you to Borger: Last Dance at Sundown for a special introductory price of 99 cents.

Review: “Borger: Last Dance at Sundown is a narrative nonfiction story that unmasks an unruly town during an unruly time, written with the spirit and power of a novel, proving once again that civilization came late to Texas, and the truth is far more entertaining than fiction. The book is storytelling at its best.”

Out on a wild and lonely patch of prairie land in the Texas Panhandle, amidst the coyotes, whirling dervishes, horned toads, and rattlesnakes, a single wooden oil derrick birthed the boomtown of Borger.

Asa Borger was a visionary.

Or maybe he was just a gambling man.

But he could see the distant parade of civilization marching toward an oilfield, and surely when they came, the wildcatters, roughnecks, and roustabouts would need to place to hold their homes and take their money.

They needed a town.

Asa Borger built them one.

The town, his namesake, was as tough, as harsh, as wild as the Godforsaken land around it, a den of corruption and iniquity, fueled in 1926 by the largest oil strike in Texas, a land known for its big oil and big rich.

The unpaved streets of Borger were lined with dance halls and gambling parlors and brothels. Bootleggers made more money than oilmen.

Want a girl for the night?

It cost about the same.

Borger was known as the “Sodom of the Plains,” the “Wickedest Town in Texas.”

It took the Texas Rangers to tame it and Martial Law with the Texas National Guard to bring some measure of law and order to its wayward and nefarious ways.

It’s finally time to tell the true story of historical Borger as seen through the eyes of early day newspapermen who wrote about a strange array of eccentric and often villainous characters walking the streets of a boomtown.