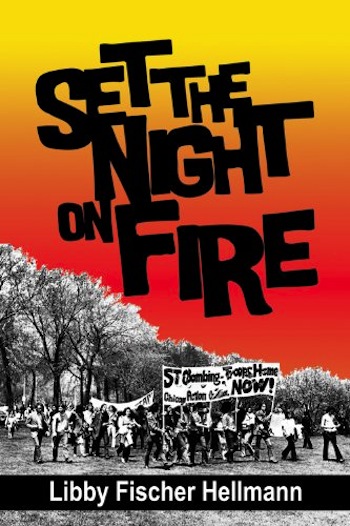 Lee Child Review: Sweeping but intimate, elegiac but urgent, subtlebut intense.  This story really does set the night on fire.

Someone is trying to kill Lila Hilliard. During the Christmas holidays she returns from running errands to find her family home in flames, her father and brother trapped inside. Later, she is attacked by a mysterious man on a motorcycle. . . and the threats don’t end there.

As Lila desperately tries to piece together who is after her and why, she uncovers information about her father’s past in Chicago during the volatile days of the late 1960s . . . information he never shared with her, but now threatens to destroy her.

Part thriller, part historical novel, and part love story, Set the Night on Fire paints an unforgettable portrait of Chicago during a turbulent time: the riots at the Democratic Convention . . . the struggle for power between the Black Panthers and SDS . . . and a group of young idealists who tried to change the world.

Sampler from Set the Night on Fire:

Dar Gantner was surprised when Rain showed up at the restaurant. He hadn’t counted on her to return his call. After a while he wondered why he’d even tried. His life had been a series of failures. Grandiose plans but flawed execution. No follow-through, no “closure,” as they called it now. It wasn’t for want of trying. God, or fate, or whatever you called the monkey upstairs, obviously had a plan for him. It just wasn’t the same plan he had.

She wasn’t the first person he called when he got out. That honor went to Teddy. He hadn’t gotten through, of course. He left a message and gave them the number of the cell he’d bought with his first paycheck. Good for a month, they said. Then you threw it away. He remembered exiting the big box store, appalled at how disposable capitalism had become. At the same time, he was fascinated by phones smaller than a pack of cigarettes. Dick Tracy’s wrist-phone come to life.

Rain hadn’t been hard to find, once he remembered her real name. She’d returned his call a day later and after a shocked silence asked where he was. He’d come first to Old Town, the only part of Chicago he knew well, but the prices were too steep so he ended up in Rogers Park. He heard the pity in her voice when he said he was washing dishes. But he might be promoted to waiter or even bartender, he said, hoping he sounded cheery. Then he asked for a favor.

“Can you track someone down for me?”

“Depends who it is,” she’d replied.

Four days later she appeared at the restaurant just before closing. He’d been scouring a large pot, thinking about the instantaneous global connections Thomas Friedman described in The World is Flat. He’d always been a voracious reader, and while reading was a poor man’s substitute for experience, he had a hole of four decades to fill. He glanced up as she pushed through the swinging door.

She immediately picked him out. “You look exactly the same, Dar.”

Dar had never been vain, but he knew she was flattering him. Tall but stooped from years of inactivity, he had a paunch, no matter how many sit-ups he did. His dark hair, now salted with gray, had thinned, and age spots freckled his skin. Only his eyes looked the same, he’d been told. Deep-set and so smoky you couldn’t tell where his iris ended and his pupil began. Eyes with such a piercing expression that people figured he was as crazy as a loon and crossed the street rather than walk past him. They had helped him inside, those eyes. People generally left him alone.

Now, he and Rain exchanged one of those half-hearted hugs you give when you don’t know what else to do. Rain was smaller than he remembered, but in blue jeans and a sweater she still cut a trim figure. Her ashy hair was still long and straight. But her face was lined, and her glasses, which she’d worn back then, too, seemed thicker.

She glanced around the kitchen. Disappointed, he figured. She had a point. Paint was peeling off the walls, the floors were chipped linoleum, and most of the equipment was circa 1950. “How ‘bout I wait for you in the Golden Nugget on Lawrence? It’s open twenty-four-hours.”

He flashed what he hoped was a reassuring smile. “Wild horses . . . ”

She smiled weakly and went back out.

Half an hour later, he passed underneath the yellow sign outside the Golden Nugget restaurant. A video camera tilted down toward the sidewalk. He’d noticed them in stores, office buildings, parking lots, street corners. Big Brother was now ubiquitous.

Inside, the staff outnumbered the customers. Two waitresses chatted up the short order cook at the pass-through behind the counter. Rain, in a booth at the back, waved him over. As he sat down, one of the waitresses shuffled over and asked tiredly what he wanted.

Rain peered at him over her glasses. “It’s on me.”

He nodded his thanks, not even bothering to muster a show of pride. He was short on cash, and she knew it. Then again, that was nothing new. He ordered a BLT with fries and coffee. Rain shook her head when the waitress turned to her, “Nothing.”

Rain waited till the waitress poured his coffee and went away. Then she announced, “Alix’s brother lives in Michigan. In their old summer home. A big ass house on the lake. Near Grand Haven.”

Rain shrugged. “The house is on a private road. There’s a gatehouse, and they won’t let you in unless you’ve been cleared in advance.”

Dar thought about it. Then, “How’d you find out?”

He sank back. He’d only just discovered Google, at the library, but he was fascinated by its reach. The waitress brought his sandwich.

“Why do you want to know about her brother?”

“Have you called Casey?” she asked. Rain had always been blunt, he remembered.

Dar chewed his food. “I didn’t think he’d want to see me.”

“Have you been in touch with him?”

“Only once. When Payton . . . ” She cut herself off. “I hear about him, though. Casey, that is. He’s very successful.” She paused. “What about Teddy? I don’t expect you’d want to hear from him.”

“Actually, I put in a call to him the other day.”

Dar speared his pickle with his fork. “Teddy and I have unfinished business.”

Rain had been a woman who’d shown no fear, even when she was arrested during the Convention in ’68. But now she looked small and vulnerable and scared. “Dar, does he know where you are?”

Dar thought back to the message he’d left. Did he mention he was in Chicago? He had. “Why?”

She squeezed her eyes shut.

She opened her eyes. “You need to watch your back, okay? You remember what we used to think about Teddy?”

“What you used to think.”

“Listen to me. About fifteen years ago I got a package in the mail.”

“Small. Carefully wrapped. No return address. Just a note with it that said, ‘You were right.’” She paused. “Took me a while to figure out who sent it and what it meant.”

“It was from Payton. And it contains something that . . . well, it has to do with Teddy.”

She shook her head. “Not here. Not now. But it’s important, and it’s in a safe place. If anything—ever—happens to me, you need to know that.”

“Still the theatrical one.” He smiled. “The Sixties are over, Rain.”

Her gaze hardened. “You can’t tell me you haven’t thought about it over the years.”

“I’ve had forty years to think about everything.”

“Yeah, well, a month or so after I got the package, Payton had that fatal car ‘accident.’”

Dar laid his fork down.

Please click HERE to purchase your copy of Set the Night on Fire from Amazon.