Wednesday Sampler: Footprints in the Frost by Jackie Taylor Zortman 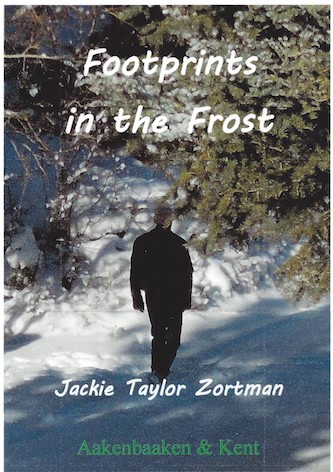 First place award-winning novel Footprints in the Frost introduces homicide detective Max Richards and his life both on the job and away from it.

When he is hand-picked by the chief of police to work a long and complicated serial rape case involving five beautiful victims with whom he must spend much time, his relationship with girlfriend and bookstore owner Sami Murphy becomes complicated.

Escaping from the hustle and bustle of the city to a remote Colorado mountain cabin, the two of them try to relax and decide if their jobs and lives can meld permanently or if they should go their separate ways?

The detectives always held their own New Year’s Eve party at a private club just east of the city limits.  Max looked handsome in his sport coat and slacks when he picked Sami up that evening.  Sami was stunning in her simple, short red dress and red silk high heeled pumps.

She carried a small, red evening bag. Max dubbed her his personal “lady in red” when he saw her.  By the time they arrived at the club, the party was already underway and most of the people were well into an advanced state of revelry.

Max hated to dance and, most of the time, absolutely refused to.  However, he grudgingly danced several slow ones with Sami.  They visited with the other detectives and their wives or girlfriends until midnight and shared the traditional midnight kiss beneath the spinning mirrored ball revolving overhead.

The stresses that had been haunting Sami prompted her to drink more than her usual ration of just one or two glasses of wine that evening.  And she well knew that such behavior could go either way on her.  She could be a delightfully happy drunk or, on the downside, a rather aggressive and surly one and Max dreaded to find out which one it would turn out to be tonight.

Sami’s body simply did not tolerate chemicals of any kind.  And she had never enjoyed the feeling of not being in complete control of herself, so rarely overindulged for those reasons.

On the way home, they had just pulled into Sami’s driveway when Max’s pager went off.  Quickly, he pulled his cell phone out of its holster and dialed the service number.

“Well, happy frickin’ New Year, Mr. Big Shot Detective!” she replied with anger and disappointment.  And now they both knew.  Max was not even remotely amused.

Max had intentionally failed to tell Sami that the murder he was leaving to investigate was a mere eight blocks away. Since it was his turn on rotation to be on call for the next homicide, he had an unmarked detective’s car at home, which he drove to the scene and parked behind the squad car that was already there.

Max entered the house from the porch, going directly into the living room where the body of the victim, a blonde thirtyish female, lay with part of her lung protruding through a gaping six-inch exit wound on her right upper back.  The entry wound was on the left side of her chest over her heart.

An amazing amount of blood was spattered behind the body and Max was astounded to find copious amounts of droplets on the front and side of the refrigerator and on both the ceiling and floor of the kitchen.  The kitchen was completely around the corner from the body and was separated from the living room by a wall, though the body was near the doorway.

When he saw the 270 Winchester leaning against the end of the sofa across the room, he knew that the tremendous velocity from the muzzle blast of such a high powered hunting rifle would have carried the blood with a swirling funnel-shaped motion into the kitchen, where it was flung in all directions.

The victim had been shot from a close distance of about six feet, which is unusual for such a high-powered hunting rifle. Max had never seen this before.

Please click HERE to find Footprints in the Frost on Amazon.