Why would I be foolish enough to write a memoir? 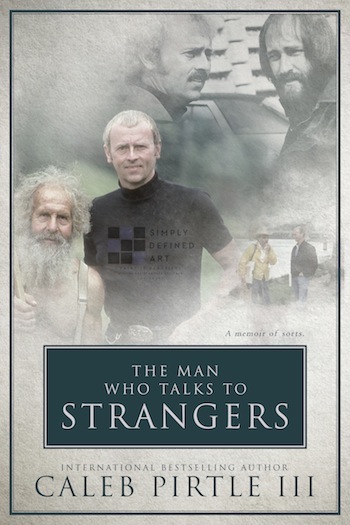 You’ll find The Man Who Talks to Strangers on Amazon. It was released this weekend.

This is what happens when you hang around too long and travel too many back roads that lead to everywhere and sometimes to nowhere.

You start to remember.

You have friends that help you remember.

You start to realize that your age is no longer counted in years but in the number of miles you have journeyed.

I didn’t add them up.

I don’t want to be that old.

I was sitting around with Gerald Crawford, my old running mate, my chief photographer when I was wandering around the country for Southern Living Magazine. He has spent most of fifty years getting me into and out of trouble.

I took a sip of coffee, heavy on the cream.

“You need to write a memoir,” he said.

I choked on the coffee.

“No one in his right mind wants to read about me,” I said.

He couldn’t argue with that.

“But,” Crawford said, pouring himself another cup. It was black. He’s tougher than I am.  “They sure might like to read about the people you’ve met in your life.”

I thought it over.

“You know the famous,” he said.

So I did, a few of them anyway.

I became a familiar face backstage of the Grand Old Opry.

At Southern Living, we were the voice of the South.

The South owned the Nashville Sound.

I spent time on the road with Tom T. Hall, Porter Wagoner, and Dolly Parton, had my own table at Tootsie’s Orchid Lounge.

Everybody who walked through her front door had a song.

Who wanted to hear it?

Who wanted to sing it?

Lord, they had written it, and it was a good one, too.

Their dreams lasted till the money ran out, and within a week or two they were gone, their songs folded up and stuffed in their pockets.

“You know the infamous,” Crawford said.

For years, I wrote police stories for the Fort Worth Star-Telegram.

I knew the cops.

I knew the criminals even better.

I talked with them.

I prayed with them.

I sang hymns with them.

I bought them bacon and eggs for breakfast.

I’d do anything for a front page story, and they told me a lot of stories, and their stories crawled their way into print.

I even sat with one on death row on the last night of his life.

The warden called me out of the cell at eleven-forty-six.

“Give Harold a message,” he said.

“Tell him we’re not killing him at midnight.” The warden grinned. “The lawyers outsmarted the judge one more time,” he said.

Or the blind blues singer.

He sang about love.

He sang about two lovers.

He sang about love lost and dying.

He knew what no one else did, he said.

He knew where she lay beneath the cold, cold ground.

He confessed every night with a guitar tucked up under his arm.

Who knew he was confessing?

I believed every word he sang.

Maybe I might be able to write a memoir after all, I decided.

“You really ought to do it,” Crawford said.

“What’s got you so fired up about me writing a memoir?” I asked him.

Crawford leaned back and propped his tennis shoes on the table top.

And sure enough, he is.

You’ll find The Man Who Talks to Strangers, a memoir of sorts, on Amazon. It was released this weekend.