Want to take a terrifying journey? 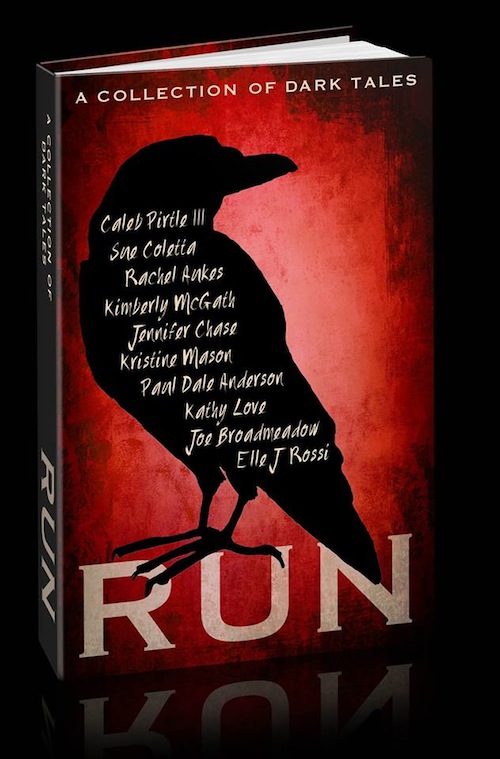 WANT TO TAKE a journey to places you’d never go outside the pages of a good book?

You’ll find those frightening places in Run, a collection of dark tales written by some of the top crime and mystery writers in the country.

The stories begin so simply.

They end with such impact.

Each passage becomes more terrifying than the last.

Since I have always been intrigued by the way authors begin their stories, I am including the openings of five of the stories locked away in Run.

They are doorways to great fiction if you dare to enter.

If you don’t, you’ll always regret it.

The Game by Elle J. Rossi

When the floor creaked in warning, I recognized the sound for what it was – my dad coming to rouse me. Still I couldn’t help but feel as though his steps were the march of death. He only ever came to my room in the middle of the night for one thing.

I pulled the cover over my head and curled into a ball. The game. I didn’t want to play tonight. To be more precise, I never wanted to play again. Least of all on the eve of my sixteenth birthday.

Though my father spoke in a whisper, his tone left no room for argument. I sat up and tossed the blanket to the floor. Wasn’t that exactly what my Dad was doing with my life? Tossing it away as if the relationships I’d built in the last six months, the life I’d fought to carve out for myself, meant nothing? Nothing at all.

Smile for Me by Kristine Mason

Age gracefully? Whoever came up with that slogan could kiss her dimpled butt.

Lisa Duplain had no desire to embrace the deep nasolabial folds running from the side of her nostrils to the corners of her mouth, or the signs of the marionette lines starting to droop from her mouth to her chin. Marionette lines. As if she had the mouth and chin of a ventriloquist’s puppet.

After turning forty-five last month, she was now officially considered middle-aged. Forty-five. When had that happened? Where had the years and her youth gone? Instead of accepting the aging process, she envied her daughter’s fifty-year-old smooth skin and perfect complexion. She spent hundreds of dollars on anti-aging creams, and hours in front of the mirror, studying her pores, the fine lines skirting her eyes, or pulling the skin around her face to remember what she’d once been. Pretty. Desirable. Young.

“You say I’m bleeding all over your carpet? Maybe I am. So what? Let’s get one thing straight, lady. I’m in charge here. I’ve got a gun an’ you ain’t.”

Lucy stared at the gun. She had never seen a gun this close before. She felt more curious than scared. She wondered what the gun would feel like in her hands instead of his.

“I need a place to hole up while I figure out a way outta this mess. Your house was handy. You shouldn’t have opened the door when I rang the bell.”

“’Cause you have no idea what kinda psycho nut-job’s waitin’ on the other side with a gun,” he said and grinned. She thought he had an evil grin. If he wanted her to think he was pure evil, he almost succeeded. But Lucy had seen evil before, and she knew he was nowhere close to being pure anything.

A Love Story by Kathy Love

“Who the hell would send that?” Taylor said, her voice higher pitched than usual, her face pale, bringing out the purplish smudges under her blue eyes.

Keri didn’t answer. She couldn’t do anything but stare at the screen of Taylor’s cell phone and the blurry image sent to her on SecretSnap.

It looked like it was a male, although Keri couldn’t really tell since the face was hidden in the shadows of the gray hoodie he wore. Across the bottom of the picture were the words, “True love never dies.”

A Promise Is a Promise by Joe Broadmeadow

“Come get it, pussy.” Jimmy leaned down from the tree limb, waving the ring in my face. “What’s a matter, scared to climb a tree?” He continued up, moving away from me.

I looked around, the others were all laughing. Pointing. Making fun of me. I’d show them. I can climb the tree. I reached for the first limb and pulled myself up. Reaching for the next branch, I forced myself higher.

Something splashed on my head. As I looked up, the warm liquid hit my forehead and burned my eyes. I tasted something salty as it hit my lips. The sun was shining; how could it be raining?

Holding my hands to block whatever it was, it began to slow. I turned my head away.

Click HERE to read the openings of the other five authors who produced short stories for Run: A Collection of Dark Tales.