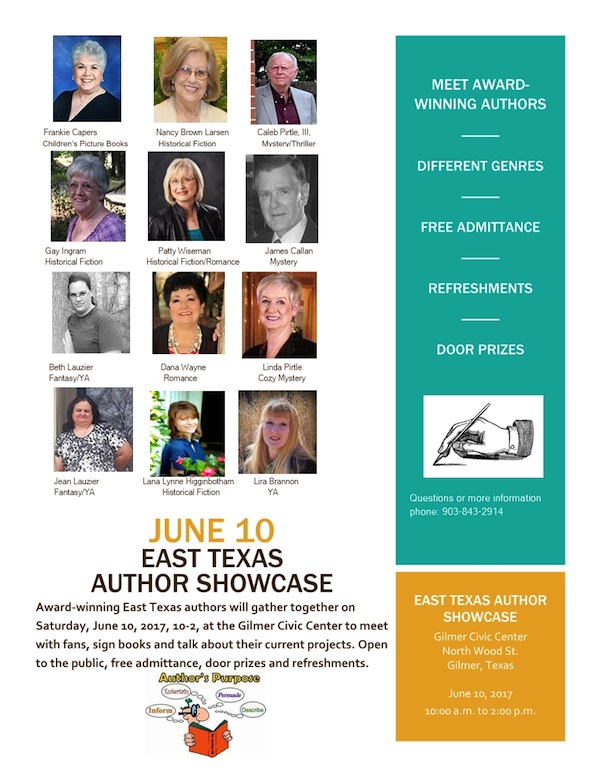 Authors Showcase is coming June 10. You’ll find books in every genre and can spend some time with the authors who wrote them.

Saturday’s coming, and it’s the kind of day I like best. Linda and I will be hanging out with a bunch of friends, who happen to be outstanding, award-winning writers, at the East Texas Authors Showcase in the Gilmer Civic Center.

It all gets underway at ten o’clock, and we’ll all probably stay until somebody comes along and kicks us out.

Here is a glimpse a four of the authors who will be on hand, and we’ll showcase more authors tomorrow and Saturday on Here Comes A Mystery. 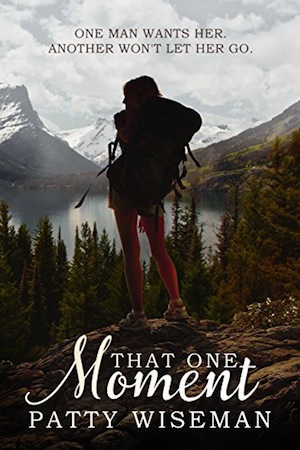 Ricki Sheridan travelled a long way to seek refuge at Wolf Den’s Lodge high in the mountains after a devastating betrayal. Heartbroken, she signed up for a survivalist backpacking trip to live off the land and forget.

When evil finds its way back into Ricki’s world, their fragile bond is tested, forcing them to face

their greatest fear: can a wounded heart ever trust anew? 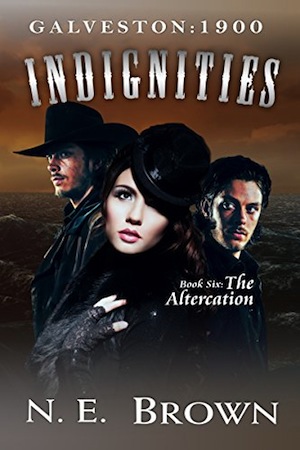 In this installment of the Galveston, 1900, Indignities Series, Catherine has her three youngest children enrolled in school. Her eldest son, Daniel, has dreamed of becoming a doctor and is pursuing his dream as a med-student in the Galveston Medical School.

Her second son, Adam, seeks his independence. He finds a job at the shipping docks and moves to his own apartment. At the moment, Catherine feels that the family will have a bright, prosperous future in Galveston.

A vulnerable nineteen-year-old girl has been lured into prostitution with promises of a better life. She mysteriously disappears, and because she is Adam’s friend, the authorities look to him for answers.

Scared and on the run from the law, Adam goes to his birthplace in Beaumont to uncover his mother’s darkest secret. 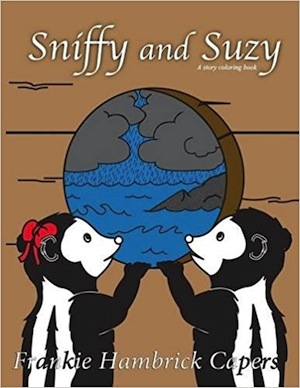 Enjoy Coloring these wonderful drawings as you read the story of Noah’s Ark told through two skunks point of view.

As one reviewer said:  enjoyed this flood story told from the perspective of two little skunks who worry that they will not be allowed on the ark very much.

Beautifully illustrated pages on one side, coloring pages on the other for little ones to become involved in the story.

This book a must have. 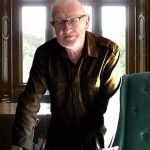 Ken Fry’s The Chronicles of Aveline