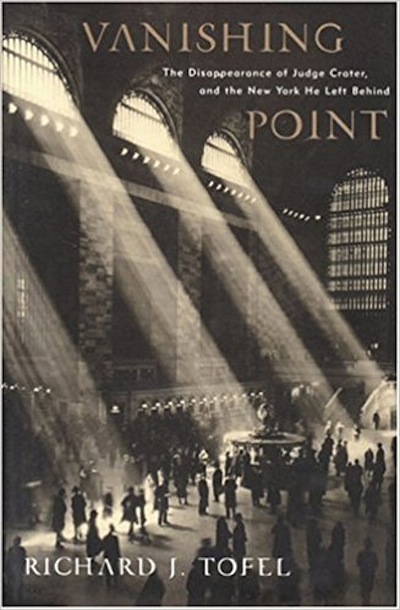 There are many twisty-turns to Judge Crater’s life that added to the intrigue and complicated the investigations.

As I watched a re-run of one of my favorite old TV shows, 77 Sunset Strip, I did a second take toward the end at the mention of Judge Crater. The storyline of the TV Show which aired on Dec 9, 1960 was about a fellow with too many women. He had bigamy in his past and on his mind.

Detective Jeff and sidekick, Kookie ask the suspected bigamist if he is married to one of the female players.

“No,” he replied. “We stood up and said the vows but the credentials of the judge were no longer valid.”

“Karma (bride’s name) and I got married during one of her séances and the judge that appeared out of the misty ether to marry us, was Judge Crater.” (similar to the statement he made, paraphrased)

The Judge Crater mentioned would have had to have been a ghost, as he disappeared one day and never returned. He was known forever more as New York’s Missingest Man. Was he dead, in hiding? No one knows for sure. The mystery has baffled people for over ninety years.

Since the judge that officiated at the séance wedding was just a ghost, the man was then free to marry his current girlfriend without committing bigamy and Jeff and Kookie gave their blessings in the fictional show.

Joseph Force Crater, 41, was appointed by Governor Franklin D. Roosevelt to the New York Supreme Court in 1930. He would need to also win an election in November to serve 14 years. In June, Crater received a telephone call that left him shaken and he told his wife, “I’ve got to straighten those fellows out,” shortly after he hung up the receiver at their Maine retreat.

He left alone for his New York residence, gave his maid some time off and began removing files from his chambers. He had his assistant cash all incoming checks and put the cash in his pocket without counting it.

The assistant then helped Crater take the files he was removing from Crater’s chambers to his Fifth Avenue apartment. Later Crater had dinner with some show business friends and as he was leaving them in a Taxi headed for a show in the theater district, he waved a cheerful goodbye to his dining companions.

That was the last anyone ever saw of him.

There are many twisty-turns to Judge Crater’s life that added to the intrigue and complicated the investigations. If you want to read more of the facts surrounding the disappearance of Judge Crater, there is a book that gets some excellent reviews: Judge Crater, The Missingest Person: How Did He Disappear and Why They Couldn’t Find Him. The author is John Winslow Gibson and it is available in PB and on Kindle, 164 pp. The book blurb on Amazon hints that author Gibson believes Judge Crater went into hiding with a new identity and did not die at all.

The book also has a second section about a different and macabre case, Babes in the Woods. Another volume on the subject (quite hard to obtain) is The Empty Robe by Stella Crater, the judge’s own wife. It has very good reviews, but it is apparent that Stella was biased by deep love for her husband and possibly could not paint a clear picture of all the circumstances.

As a result. Vanishing Point by Richard J. Tofel may also be worth reading if you are into this subject.