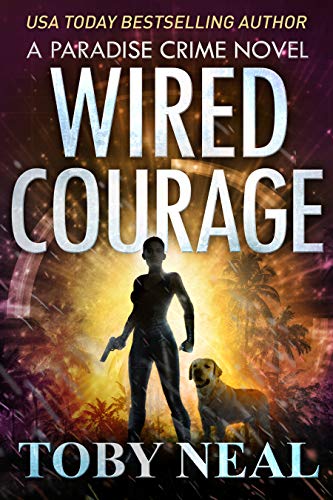 In the end, it’s Sophie who must face the darkness from her past and vanquish it. Read an excerpt from Wired Courage, a Paradise Crime Novel.

Paradise is stalked by a relentless evil.

What would you do if your family was threatened?

Sophie just wants to settle down with her unusual family—but a powerful presence sweeps in to steal her joy. At her most vulnerable physically and emotionally, Sophie must rise up to hunt down those who would take what’s most precious to her.

The boundaries of love and friendship are tested as the men in her life grapple with their roles, each trying to help—but in the end, it’s Sophie who must face the darkness from her past and vanquish it.

Discipline was beautiful, even when it hurt.

Pim Wat stood on the stone balcony of the temple overlooking the courtyard. Rows of acolytes, dressed identically in black cotton gi, practiced before their master. The crisp movements of the closely guarded martial arts routine were already embedded in her own muscle memory, and if she’d joined the young men and women in their tidy rows, she could have performed their routine perfectly, too.

Someone missed a movement, the mistake glaring in the crisp rows of conformity, and the master raised his baton.

All movement ceased. The rows of recruits froze into stillness. The master lowered the baton, and the recruits dropped to the ground to do push-ups.

They would do push-ups until he raised the baton again.

Pim Wat took the hand thrown porcelain teacup without looking at her maid. She sniffed the jasmine-scented brew, then took a sip. Scalding hot, just as she preferred. “Acceptable.”

She seated herself on one of two chunks of amethyst that had been beveled into stools. A large tiger’s-eye plinth, glowing with bronze iridescence, served as a table. Armita faded back into the building after leaving a lacquered tray holding a pot and another teacup.

Perhaps the master would join her, but he didn’t always. Pim Wat willed him to, craving the drug of his presence.

The recruits were still doing push-ups. At last, the master raised his baton, and they leapt to their feet in one accord. He barked out an order, and the routine began again. He tapped a student on the end of one of the rows with the baton, handing it over. The black-clad young man took the carved ivory cane reverently, and stepped into the leader’s place in front.

The master strode toward Pim Wat, and she smiled with satisfaction as he glanced up at her.

Moments later he seated himself on the other chunk of amethyst and picked up his teacup. He closed his eyes to savor the tea, some of the most expensive and exquisite in the world, as Pim Wat feasted her hungry gaze on the man that she loved with an unseemly and obsessive passion.

The master looked no more than thirty, though he was at least Pim Wat’s age. His long black hair was braided and decorated with carved jade. The smooth fans of his eyelashes rested against golden-skinned, high cheekbones, contrasting with straight black brows. He opened dark purple eyes that must be the result of some multi-racial encounter of ancestors. “When is she coming to us?”

Pim Wat tightened her mouth in annoyance and hid her expression behind the delicate, hand thrown cup. “My daughter is stubborn. I’ve told you this.”

“And I’ve told you that she cannot be persuaded. Especially now that she’s pregnant.” Pim Wat’s cup rattled as she set it on the tray. She was going to be a grandmother. What a reminder that time was passing. Despite all her efforts, she was getting old. “I have tried everything to get her to come, even threatening her lover. She has refused.”

“Does she suspect anything about what we really want?”

“No. How could she? But she does not trust me.” Pim Wat made a fist. “I cannot command her like I used to.”

“You must manage your emotions, Beautiful One,” the master said. He leaned toward her, but instead of a kiss, drew a line down her profile with a finger and tipped up her chin. He teased her, rolling the ball of his thumb across her lower lip. Pim Wat’s eyes fluttered shut in anticipation and her body trembled. “Take her, if there is no other way. Do what you must do.”

Pim Wat kept her eyes closed for a long moment, still hoping, but when she opened them, he was gone.

“Manage my emotions, by Quan Yin’s left tit,” she snarled. “Armita! My tea is cold!”

Armita came out onto the balcony and whisked away the tea. Pim Wat looked down at the practice area, but it no longer entertained her. She followed her maid into the main chamber of her apartment.

Thick, luxurious carpets and rich silk drapes softened the harsh stone walls and floors of the ancient room. “We must prepare a plan to get Sophie Malee,” Pim Wat said.

Armita’s eyes flashed, just a tiny flare of defiance. “Are you sure that’s a good idea, mistress? She is well protected.”

“The master wants her, and thus she will come. Once she’s here, they won’t be able to take her back. The stronghold of the Yām Khûmkạn is too remote and fortified.” Pim Wat turned toward a tall, exotic wood armoire. “Back to Hawaii I must go. Such a long, tiresome flight.” Pim Wat pinched the back of Armita’s arm viciously as the maid reached out to open the armoire. “And that’s for questioning me.”