Tuesday Sampler: Once Upon a (Fallen) Time by Samreen Ahsan 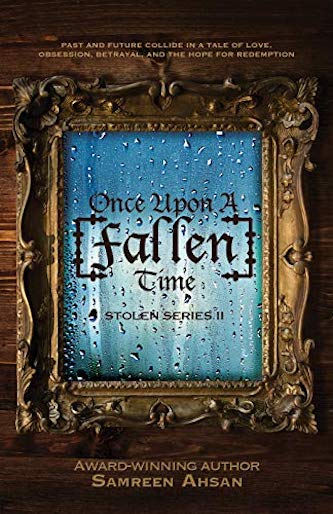 The past and future collide in a tale of love, obsession, betrayal, and the hope for redemption.

All her life, Myra Farrow has been obsessed with medieval castles—and the kings and princes who once inhabited them.

Now, wealthy videogame designer Steve Bernard wants her to model for a princess character in his new game. Myra can’t resist his offer, especially when she learns that Steve plans to film inside the mysterious Hue Castle—a cursed, barren, colorless place forbidden to visitors for centuries.

But unknown to Myra, her soul is bound to Hue Castle by blood and sorcery. When she enters its doors, she awakens dark powers that will reach through time—stealing her past, torturing her present, and rewriting her future.

Edward Hue, the last of the Hue royal bloodline, has never stood in the sunshine or held a living flower. Cursed from birth to live in darkness and bring death to all he touches, he is at the mercy of his cruel, tyrannical father, who will not rest until he shatters Edward’s soul and makes his son into a diabolical copy of himself.

Edward’s one hope is the mysterious woman who haunts his dreams—who will either break his curse and bring him out of the darkness, or destroy him utterly.

“I asked you, Edward, have you ever had a dream?” He looked me in the eye, examining my every expression.

I sank deeper in the velvet armchair and leaned against the backrest to look up at the ceiling. “Dreams are illusive fantasies. They never come true.” I looked back at him.

He didn’t take his deadly eyes off me. “So, you have fantasies?”

“You called to interrogate me?” I asked, irritated.

He chuckled and picked up the book. “I can assure you, dreams do come true.” He opened the book and handed it to me. I looked at the book carefully; the first illuminated parchment grabbed my attention. The book was written in Latin, but I knew it was the translation of Roman de la Rose (Romance of the Rose) by Guillaume de Lorris, a French poet who had existed almost two hundred years ago. I had seen this book back when I’d been a child. I knew it had been given to my father—a gift from an English poet I had once met in my childhood.

I focused on the image, a man lying on the bed, traversing into a dream. The image was surrounded with a text and decorated initials.

“Many men say that there is nothing in dreams but fables and lies,” he watched me as he read the verses. It seemed like he had memorized it. “But many may have dreams which are not deceitful, whose import becomes quite clear afterward.”

I regarded him with a sour expression. What was he trying to imply? That he had some stupid dream, which held some significance in his life? I looked back at the parchment and focused on what he was saying before I closed the book and placed it back on the table. I didn’t want to go down this road with him.

“What is the hurry, son? Don’t you fancy a drink with your old man?” he snickered and handed me a drink in a crystal goblet. He had never spoken to me like this—in a father-son way. It had always been a king and his descendant. I took a sip and looked at him with a raised eyebrow.

“Do you know why I have called you here, Edward?” he asked, drink in his hand while he blew another puff. I waited for him to continue. “Remember I told you how hazardous a beautiful woman is?” I held my breath tightly. I had a feeling this was not going in a good direction. “She could poison our lives.” I bridled my wandering thoughts. “But…”

He stood up and walked about the darkened room. My eyes followed his haughty poise. There was something on the tip of his tongue he wanted to spill, but I didn’t know why he paused.

“But sometimes… a woman can change perspectives too.” He was walking back and forth. When he went towards his bed, I noticed his mirror was missing. Had he moved it somewhere else? He stopped walking and sat back in his chair. I looked at him, waiting for him to elaborate. “Don’t be so indifferent, son, that you don’t know what I’m talking about!”

I averted my eyes and looked towards the missing mirror, followed by the door that led to the secret spring.

“The woman…” he lit another cigar and looked at me, “that you call your captive,” he took a deep puff, “I’m trying to understand who the captive is and who the captor is here.” I threw daggers at him but held my tongue tightly. Anything I’d speak might go against her or me.

“From what I see, you didn’t even ask once if she was a peasant and you invited her to the royal table.” I moved forward while clasping my hands on my knees. “So, get to the point.”

He reciprocated my act by moving forward as well to look me in the eye.

“Didn’t you notice her?” God knew how much I noticed that woman so closely. “She is here…” he moved back and spread his arms, “in this cursed castle,” he shook his head, “and still the flowers in her hair didn’t wither.” He was completely drunk in his fascination for her. “Do you honestly think she was peasantry?” He looked agitated. “The silk she wore, and besides, do you think peasant blood is capable of bringing flowers inside this castle?” There was nothing I could say. I’d have to stick to the lies to protect her. “She is no ordinary woman, Edward.” He looked me in the eye. “The flowers on her didn’t wither. Do you know what this means?” I sod inside but tried to curb my temper. He was completely struck by her powers.

“She is a witch?” I asked hesitantly.

History, art and literature are my passions. I love digging out information about prophecies, divine miracles and paranormal events that are mentioned in history and holy books, that don’t sound possible in today’s modern world.

Since childhood, I have been into reading and writing—and yes, it can’t happen without imagination, which luckily has no boundaries. Dance and music are also pastimes I enjoy, as well as reading romance fiction. I love to travel and explore historical cities.

Please click HERE to find Once Upon a (Fallen) Time on Amazon.