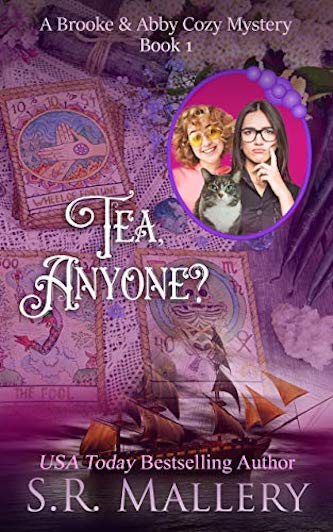 With a little time travel, some humor, and a lot of hard work.

When the skeptical Brooke first meets the psychic Abby, she’s not impressed.

But with the help of her comfort cat, her middle-aged roomie, her childhood friend, and a hunky detective hinting at a sweet romance, Brooke not only accepts that Abby has real gifts, it’s clear that these five people and one cat make up a crack team.

Got tea, anyone? In 1773, the Boston Tea Party sure did. Find out why going back in time helps break the case!

“That’s a start.” She studied the cards before her. Stroking each picture lightly, her eyes slowly rolled closed. “Fit me into 1700s’ Boston,” she said in an alto-timbered voice. “Put me where I can find out something for Brooke. Send me back…send me…”

Now she was falling, falling into a dark place, where the air suddenly seemed warm and heavy, no longer cold and thin. Where gentle crackles and hisses swirled all around her, and her body floated up above the real Abby sitting in the car’s front seat––like an astral projection. She watched the normal Abby below her, not doing anything special, just rocking back and forth gently, as if praying. Then, without warning, her spiritual body drifted away to a place where she was suddenly jerked this way and that then catapulted toward pitch-blackness, with only a hint of flashing colored lights in the distance.

The forces propelling her grew stronger and stronger, until just as abruptly, she was let go, and with one explosive whoosh sound, she landed on her feet somewhere––hard.

Through the cigar-smoky haze, Abby found herself standing in an old, eighteenth century establishment. According to a placard over the fireplace, it was named the Green Dragon Tavern. That instantly sparked a fact tidbit she had learned from her college days. I’m in Boston, and this is the Headquarters of the American Revolution!

More facts cascaded through her mind now, about how the very room she was in had served as a meeting place for Masons and general customers. But below her was another room. The important basement one. Wow. Is Samuel Adams leading a meeting right now?

She continued to scope things out. Dark olive green surrounded her––on the walls behind paintings and on the moldings bordering each doorway. Also around her were plenty of square, wooden tables, dimly lit by tall, thin candles, secured in their clunky holders. And as the loud, boisterous men, dressed in buckskin breeches, vests, and flowing shirts, lifted up their pewter mugs to blast out raucous jokes and drunken statements, her ear drums felt as if they would surely burst in a matter of seconds.

No snuffboxes or powdered wigs for this unruly crowd of undoubtedly hard-working, musket-touting Bostonians. Several of the customers flitted here and there with an exhausted-looking tavern wench, who rushed about, trying to serve demanding men guzzling as many drinks as they could get down their gullets. With her cotton head cap slightly off kilter, her hair tendrils framing her face and wet from sweat, she made Abby think about how far women had come. Or had they? She flashed on a college friend waiting on tables, who, except for the colonialist outfit, had shown the exact same exhaustion.

“Robbie!” a pot-bellied man in a sleeveless leather jacket cried, his voice gruff, his appearance even gruffer. “Where in the world have you been? I have spent half the morning waiting on you, lad. You do understand that owing to the seriousness of the meeting about to happen here, I shall need you all the more. Go now, put on an apron and give a hand to poor Brendan over there.”

Robbie? He was speaking to me? She looked down at her breeches, her long shirt, cinched around her waist by a thin belt, and her own vest. Yes, in the 1700s, a man would definitely fit in more places than a woman would. But how old was she––he? She glanced over toward the so-named young man, Brendan, snatching plates off of tables. He did not look happy.

Abby scoured around for an apron, then noticed a couple of them on hooks next to a long wooden bar. She grabbed one, hastily tied it around her waist, and made her way over to this Brendan guy, the one with a pissed-off expression splattered all over his face.

She took no more than two steps before someone grabbed her arm. “Hey, young laddie! When is my squash pie coming? I’m starving!”

So, I’m young as well. She extracted herself from him. “I shall check on it straight away, sir.”

“You do that,” he muttered, and after slugging down several more gulps from his large pewter mug, fell backward onto the floor.

Continuing on to Brendan, she noticed nobody helped the man groaning on the ground. Instead, one man casually stepped over him on his way to the bar. Apparently, with such a high intake of whiskey and ale, no one was in the mood to care. Is this just a daily occurrence? She hurried over to a snarling Brendan.

“Finally, you are here,” he snapped. “Time to get off your high arse and help me like you should have done earlier.”

I think I made a new friend.

They say I’m as eclectic as my characters. I’ve been a singer, a composer, a calligrapher, a quilt artist, and an ESL/Reading teacher.

But it is the world of writing historical fiction where I feel I’ve come “home.” It’s where I’ve received various awards and in addition, get to do my second love: Research.

When people talk about the news of the day, or when I listen to music, my overactive imagination likens the story to a similar kind of news in the past, which helps me conjure up scenes between characters I’ve yet to meet.

Ss her fans say–” she brings history to life.”

Please click HERE to find Tea, Anyone? on Amazon.