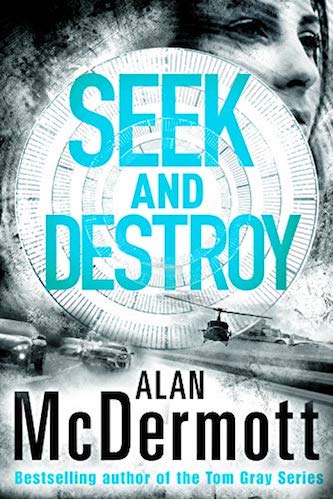 She got away once. They can’t let it happen again. Read an excerpt from Alan McDermott’s new thriller, Seek and Destroy.

Eva Driscoll is on the run. She has a new identity, and the best part of $20m liberated from the CIA. Henry Langton is dead but his sinister allies are circling, and not even a presidential pardon can help Eva against an organization that operates above the White House.

With agents around the globe and no tactic off limits, Langton’s men are calling the shots. When they track down ex-CIA computer expert Farooq Naser and threaten Andrew Harvey and Tom Gray, Eva knows they will come for her next. She needs to run—and fast—but what chance does one woman have against the most powerful group in the United States, with just a few ex-spooks and a couple of mercenaries on her side?

But her pursuers should know that, even backed into a corner, Eva Driscoll is not the kind of prey to give up without a fight. But will it mean hurting those she cares for the most?

As Gray stepped up to the ATM machine, he looked around out of habit. He’d known a couple of people who had been the victim of distraction thefts, so he always made sure there was no one near him when he used the machines. That was when he saw the Renault pull up on the other side of the street. The buzz cut and leather jacket of the driver grabbed his atten­tion, setting him immediately on edge.

Gray looked down at Melissa and let go of her hand. He hadn’t realized he’d been squeezing it so hard. He knelt in front of her and kissed her tiny fingers. “I’m so sorry, darling,” he said, with one eye on the Renault.

Two men had climbed out of the back seat, and they were heading his way. He recognized the look they shared and pegged them as mili­tary, either former or current. Whichever it was, they reeked of trouble.

Gray took Melissa by her other hand and led her away from the ATM. He needed to get her somewhere safe, and the only place he could think of was the café. If something bad were about to happen, he didn’t want Melissa witnessing it, and the owner was a friend who could handle himself. Like Gray, Marco had spent time in the armed forces. Unlike Gray, Marco was built like a tank.

Gray led Melissa to Marco’s place, and when he glanced back he could see that the two heavies were still following him and had closed to within twenty yards. He opened the door and saw his friend behind the counter, preparing a sandwich.

“Maybe. Can you keep an eye on Melissa for a few minutes?” When Gray saw the confusion on Marco’s face, he resorted to what many peo­ple do in foreign countries. “You watch Melissa? Five minutes? I go?”

Gray tried returning the expression but suspected that it came out as a weird grimace. He turned and left the café just as the two strang­ers mounted the curb. There was no emotion on their faces, and Gray wondered if they were simply heading inside for something to eat, but that thought was quickly dispelled.

“Courtesy of the ESO,” the first one said, and launched at Gray, aiming a boot at his chest. Gray easily parried it and countered with a punch to the man’s jaw that connected with a satisfying crunch. He followed up with a left, but it glanced off his opponent’s forehead. The other man joined in, catching Gray on the side of the face with a fist that felt like a hammer, and Gray’s legs barely kept him upright. He’d never been hit so hard in his life, and wasn’t about to let it happen again. He shook his head to clear it, then spun and delivered a roundhouse kick that almost tore the second thug’s head off. The man went down, and Gray turned to face the other just in time to block a fist traveling at speed toward his face. He struck out with his open palm and caught the man in the sternum. The crack of bones echoed the pain on the man’s face.

“Sonofabitch!” he grunted, but kept coming. A vicious uppercut sent Gray staggering backward, and he fell over the café’s wooden adver­tising board and ended up in a heap on the ground. He tried getting to his feet, but kicks started flying in. One caught him in the temple, and he collapsed once more, curling into a ball to prevent damage to his major organs.

The assault stopped abruptly, and Gray heard shouting and the sound of a distant siren. He opened an eye and saw Marco chasing after one of the thugs with what looked like a meat cleaver. The two attack­ers were sprinting to the car they’d arrived in, and they managed to get inside the moving vehicle before Marco could take a swipe at them.

Gray sat up, trying to make sense of it all. A single word jumped into his head.

Please click HERE to find Seek and Destroy on Amazon.