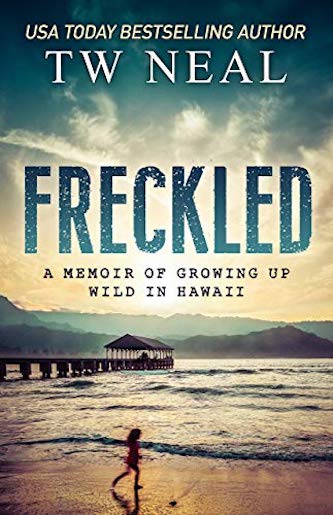 We never call it homeless. We’re just “camping” in the jungle on Kauai…

We live in a place everyone calls paradise. Sure, Kauai’s beautiful, with empty beaches, drip-castle mountains, and perfect surf…but we’ve been “camping” for six months, eating boiled chicken feed for breakfast, and wearing camouflage clothes so no one sees us trespassing in our jungle hideout. The cockroaches leave rainbow colors all over everything from eating the crayons we left outside the tent, and now a tractor is coming to scrape our camp into the river.

Standing in front of the tent in my nightgown, clinging to my sister as we face the tractor, I know my own truth: I just want to be normal.

But Mom and Pop are addicted.

Addicted to Kauai’s beauty, to drugs, to surfing, to living a life according to their own rules out from under their high-achieving parents’ judgmental eyes. I’m just their red-headed, mouthy, oldest kid. What I want doesn’t matter.

But I’m smart. I will make a different life for myself someday if I keep up my grades no matter what happens.

No matter how often we run out of food.

No matter how many times I change schools…or don’t go to school at all.

No matter how many bullies beat me up for the color of my skin.

I might be growing up wild in Hawaii, but I have dreams I’m going to reach, no matter how crazy things get.

I always listen to grownups so I can know things— “Elephant ears” Mom calls me. Grandma Gigi, Pop’s mom, believes in ESP too. “I can tell when you’re thinking about me, so that’s when I call,” Gigi says. She does usually call when we need something, and I love when her packages come in the mail, even though Pop grumbles that I’m getting spoiled.

I want to have the make-people-do-stuff kind of ESP.

We’re at dinner, and the sun has gone down behind the ocean. I can hear the surf outside; it’s coming up bigger with a shushing sound.

“Should be good tomorrow,” Pop says, sipping his beer. Because my dad’s a surfer, we always pay attention to what the surf is doing and the weather conditions. There’s “onshore,” which means the wind is in my face off the ocean and that’s bad for surf—I don’t really know why. Then there’s “offshore,” which is best to make the waves good, and “Konas,” which means the wind is light and from the side.

Mom is sitting between Pop and me. Her tummy is super big, almost touching the table, and she’s wearing her favorite blue muumuu that she sewed herself. There are some oven-baked fries, special because they are not good for you, and fish Pop caught, and Mom’s salad with bean sprouts. We have white plates with a flower border, a milk bottle filled with daisies, Mom’s favorite flower, and everything is pretty and good.

Even after he smoked today, Pop was still grumpy. I can see how he’s feeling like a black cloud over his head. Bad things can happen when I make him mad, and I do that a lot because I’m noisy and too bouncy. I’m always trying to get him to like me and see that I’m smart and can do things as good as a boy. Because I was supposed to be a boy and be named James Theodore the Third.

Mom and Pop didn’t know what to call me when I was a girl, so they named me Toby after the redheaded boy who runs away to the circus in a movie Mom watched at the hospital. I have no middle name because “when you’re old enough, you can choose your own middle name.” This worries me. How do I pick the right name? I wish I could just be named James Theodore the Third, even if I am a redheaded girl.

Maybe I can make Pop do something with ESP.

Pop looks up at me. His green eyes have red around them. The overhead light shines on his curling blond hair, going thin at the top. I stare at him, my lips moving, as I think as hard as I can—PICK UP THE KETCHUP.

“What are you looking at?” His voice is a low thunder sound. He narrows his eyes. I don’t look away or answer. He’s going to PICK UP THE KETCHUP any second now. I just know it!

“Stop staring at me.” Pop gets louder and seems to swell.

I can tell how mad he’s getting, but I stare until my eyes hurt because I can feel it almost working—he’s going to hear me any minute now. I don’t blink. I want to be scary: eyes wide, mouth tight, staring hard as I think PICK UP THE KETCHUP. I will make him do what I want!

“I said stop looking at me, disrespectful little brat!” He stands up and his chair flies back and lands on the linoleum with a thud. He’s enormous.

My mom makes fluttery noises, but it’s too late. Roaring something I don’t hear, he comes around the table and whips me off the chair by my hair. I crash onto the floor and hold onto my head and use my legs to hold myself up, trying to keep from being dragged—it hurts so bad, as he hauls me down the hall, but I won’t cry. I’m stubborn like that. I’m not afraid of pain.

I’m still thinking, PICK UP THE KETCHUP. Like it’s going to save me. Like he can hear me.

Neal is a mental health therapist, a career that has informed the depth and complexity of the characters in her stories. Neal’s mysteries and thrillers explore the crimes and issues of Hawaii from the bottom of the ocean to the top of volcanoes.

Fans call her stories, “Immersive, addicting, and the next best thing to being there.”