Tuesday Sampler: The Devil of Light by Gae-Lynn Woods 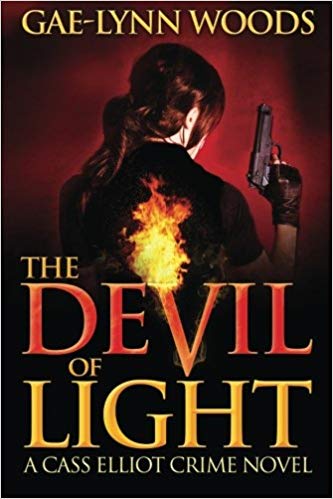 Cass holds a man’s life – or death – in her hands and struggling to walk the fine line between vengeance and justice.

Cass and her partner Mitch Stone delve into a cunning world of blackmail and violence – and find a cult concealed for nearly a century beneath the genteel, small-town façade of Arcadia in East Texas. Their investigation triggers a brutal response from powerful men who will protect their identities at any cost. They unleash a ruthless killer whose actions create a media frenzy and destroy the fabric of trust within the police department.

Tom Kado drank in Detective Cass Elliot’s fluid movements as she wove between the desks to get to the squad room’s door, and wondered what was wrong with him. He crossed the empty room to the coffee bar and poured himself a cup.

She was gorgeous. Stunning, actually. And a bright intelligence brought light to those strangely colored eyes. They were such a deep blue they looked purple. When Cass had stood from her desk, he’d realized that they were almost the same height.

Kado shook his head and scolded himself as he strode toward the evidence room. God knew he was in no shape to handle a relationship and in reality, he didn’t even want one. Caroline had only been dead a year. Barely a year. Kado’s nostrils still flared at the phantom scent of death that had oozed from her pores as cancer had eaten her alive. He still saw her in crowds and had to stop himself from calling out to her, had to endure the rush of hope every time he spotted a petite woman with shiny, straight black hair. She was slowly leaving him, occupying his dreams less frequently these days. But he couldn’t stand the thought of losing her completely, of not loving her. Of violating her memory by noticing other women.

Unlocking the evidence room door, Kado tried to push Cass from his mind. Cass Elliot is a colleague, somebody you work with, pure and simple, he told himself as he settled behind his computer and typed in a password. Besides, a woman with those looks probably has men waiting in line. She’s out of your league and, he reminded himself, you’re not in the game anyway.

Gae-Lynn Woods is a Texan mystery writer who has traveled the world, lived overseas, and come back home. She and her husband, British jazz guitarist Martyn Popey, share a ranch in East Texas with a herd of Black Angus cattle, one very cranky donkey, and The Dude, a rescue kitty with attitude.

Please click HERE to find The Devil of Light on Amazon.