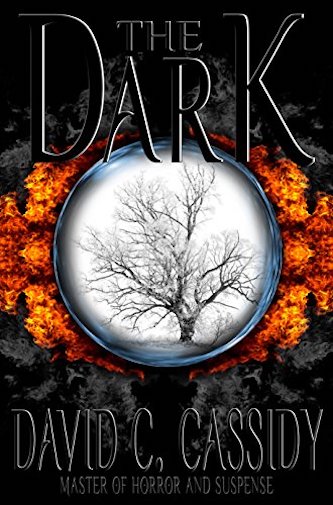 The Dark is everything that horror fiction fans want—scary, unsettling, relentless and so creepy that you will not want to read it at night. Read an excerpt from David C. Cassidy’s horror classic.

Award-winning author David C. Cassidy draws you into a realm of terror, a world unlike any other. With the inspired flair of Clive Barker and the pulse-pounding beat of Stephen King, The Dark will leave you breathless, reminding us all that for all we desire there is always a price, the currency in suffering and sacrifice.

Brimming with insidious evil and a nerve-wracking pace that never lets up, this story will grab hold of your most primitive fears and crank them up to Warp 10—and won’t let go.

It knows what you want.

It knows what you need.

In denial over his father’s death in a horrific accident, Kelan Lisk has grown fearful and withdrawn. For this meek and bullied child, a burning desire to tame a deadly sledding hill consumes him, drawing him inside a wondrous place where anything is possible … including his father.

But as this strange new realm spills into this one, twisting an innocent little boy into an agent of evil, the world is forever changed, devoured by an even greater evil—the Dark.

“Move over Stephen King and Dean Koontz … The Dark is everything that horror fiction fans want—scary, unsettling, relentless and so creepy that you will not want to read it at night.” — Charity Tober for Readers’ Favorite

“I haven’t enjoyed a horror novel this much since the early days of Stephen King’s work.” — Miss Lyn, Amazon Reviewer

“You can’t read this in the dark because the author has made it too real … this is horror at some of its finest.” — Samantha Colville for Readers’ Favorite

“The Dark compares with works of King and Koontz and is tremendously difficult to put down.” — Melinda Hills for Readers’ Favorite

Lost in the blackness of the mine, Harmon Wyatt choked off a scream.

Those words hadn’t come from his cherished daughter. It was the song of her sweet voice that tugged at his heart, but it wasn’t her. It was an abomination.

Skulls stirred in the death pit below. They shifted listlessly, as if detached from their spines. Yet this was but illusion, for they were glowing, somehow pulsing to the rhythm of hearts long lost—indeed, the frontal bones of their craniums appeared semi-transparent, brimming with the darkest blood. Were this not enough to send him screaming, the skeletons began to rise, rattling bone on bone. Shrill scratching sounds turned his heart cold as their wretched fingers clawed at the ladder.

The dead were coming.

Human skulls rose, one by one. Canine skulls began to stir; their jaws began to open. Something snatched Harmon’s leg and yanked it out from under him. He toppled onto his back. The ceiling rock took the color of blood as skeletons emerged from the shaft. A long-dead hand clenched about his boot and dragged him toward the bone pit, yet all he saw was a pulsating skull hovering above his legs. It stared with barren black sockets, and it might have been grinning.

Harmon groaned as the creature crawled onto him. The skull was ice, its proximity burning the skin on his face. Before he knew it, he felt the wrench of thin, hard fingers around his throat. A second skeleton clawed its way up and was on him, pinning his legs.

He reached for a shovel. A dead hand thwarted him, slapping it aside. The shovel slid along the wall rock, and he caught the handle just in time. He brought his arm up and swung hard, hearing a satisfying clunk as the blade caught the skull directly above him. A second blow crushed its temporal bone and half its frontal. Incredibly, blood seeped from the cracks in the bone.

The grip on his throat eased, enough for him to steal a breath. He swung the shovel again and knocked the skeleton off of him. It stayed down.

Harmon struck the one that was pinning him. He thrashed at it like a wild man, driving it back. It rocked against another that was climbing from the winze, sending that one back into the shaft. He drove a boot into it, and it fell into the winze.

Another had come—a child’s skeleton—and Harmon jabbed at it with his foot. Relentless, it moved up and tried to claw at his face. He pounded it with a flurry of fists and it slipped back.

Three more emerged from the shaft, two of them crawling over the child. One crept up beside him, but he managed to fight if off with crushing blows to its skull. Blood splattered him.

Harmon rolled over. He crawled forward and let out a small cry as something snared his boot. He whacked that bony hand until it released him.

Somehow, he scrambled away and shot a glance over his shoulder. Glowing skulls illuminated the rock, their muted light growing as the things closed on him. Some of them had risen and were stalking him in step, shoving the crawlers aside in their thirst.

He got to his feet just as a canine skull carried past the crest of the shaft. One of the human skeletons had lifted the dog and had set it loose. A second dog-thing followed, and now it was after him.

Harmon fled, screaming into the dark. The water slowed his escape as he made his way to the crosscut. He recalled the way being straight and wide, but in his blind panic he stumbled over tool and rock and his old failing legs. He was running in a nightmare.

He heard them coming. Some of them had lost their footwear, the bones of their feet grating on the ore beneath them. Others scraped the wall rock with their fingers as they worked their way along.

It struck him: They were sharpening them.

Raised by wolves, he grew up with a love of nature, music, science, and history, with thrillers and horror novels feeding the dark side of his seriously disturbed imagination. He talks to his characters, talks often, and most times they listen. But the real fun starts when they tell him to take a hike, and they Open That Door anyway. Idiots.

David lives and plays in Ontario, Canada. From Mozart to Vivaldi, classic jazz to classic rock, he feels naked without his iPod. Suffering from MAD—Multiple Activity Disorder—he divides his time between writing and workouts, photography and Photoshop, reading and rollerblading.

An avid amateur astronomer, he loves the night sky, chasing the stars with his telescope.