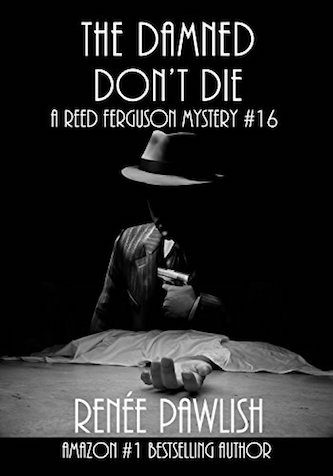 A suspense-filled mystery, with a Bogie-wannabe detective, lots of humor, and a clever homage to film noir.

Denver private investigator Reed Ferguson isn’t looking for an investigation, but one comes his way when his crotchety neighbor, Shirley Durocher, is murdered the day after a contentious Homeowners Association meeting.

The suspects with motives are many, including Shirley’s shy granddaughter, Holly, who insists she is innocent and hires Reed to clear her name and find the real killer. To complicate matters, romantic sparks fly between Holly and Cal, Reed’s computer-geek best friend.

As Reed delves into the case, he discovers lies, deceit, thieves, and secrets that may lead to Shirley Durocher’s murderer. Can Reed juggle his most challenging case yet while playing matchmaker for Cal?

The Damned Don’t Die is a suspense-filled mystery, with a Bogie-wannabe detective, lots of humor, and a clever homage to film noir. From the award-winning author of This Doesn’t Happen In The Movies.

“I know exactly what you’re up to.” It was Shirley. She was just as angry as she’d been inside.

“I can assure you, I’ve been board president for two terms now, and there have never been any issues.” This from Alan Prestwick.

“If you want to cover up for Phil Epstein, you can try, but I’m not going to put up with this nonsense. My money is valuable, and if I have to get the law involved, or more, I will. This is important, and if you don’t do something about it, I might talk to people. And that won’t help you with that other situation.”

“Don’t you threaten me.” Prestwick’s voice had grown ominous. “You think I don’t have ways to handle people like you?”

“That sounds like a threat, too. You better watch yourself.”

A crack sounded loudly in the darkness, and Prestwick cleared his throat. Then footsteps clapped on the pavement. I pressed against the wall, but neither one of them came by me. I peeked around the corner. No one was there.

What was that crack? Had one of them hit the other?

I peered into the night and mulled things over. Shirley was certainly stirring things up. Was it justified? The investigator in me didn’t think I could let it go, but I hadn’t heard anything about the HOA’s financials being off. However, I hadn’t been at too many meetings.

I jumped at the sound of Willie’s voice. She laughed and put her arm on my shoulder.

She looked around the corner. “What’s going on? Is there a ghost out there?”

“Nothing.” I told her what I’d overheard.

“Do you think Shirley has uncovered something illegal?”

We walked to my 4-Runner and drove to B 52s. I didn’t think about Shirley for the rest of the evening. After a few games of pool, Willie and I headed home.

The next morning, Humphrey Bogart’s voice woke me from a deep sleep.

“The cheaper the crook, the gaudier the patter.”

It was a new sound bite I’d installed, Humphrey Bogart in The Maltese Falcon. I’m an avid film noir fan. I love those movies with the dark, noir hero and the femme fatales. And I aspire to be as cool as Bogie was. A stretch, I know, but I can dream, can’t I?

Willie mumbled something about killing whoever was calling so early as I picked up my phone. I recognized the number. Deuce.

“You’re never going to believe it.”

Humphrey – the kitten – jumped upon my chest and began purring.