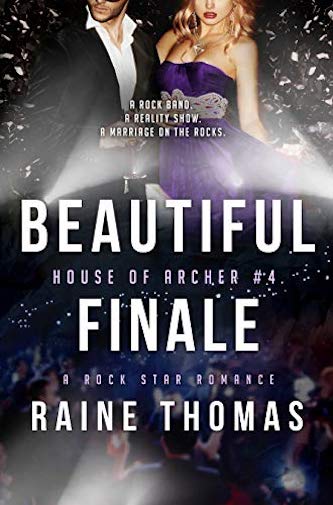 Well written, incredible depth of characters and an exciting and interesting plot-line.

A rock band. A reality show. A marriage on the rocks.

In the span of four months, Lily Montgomery has gone from touring with her best friend to marrying him. It feels like someone has stomped on the gas pedal that is her life. Right now she is more than ready to pump the brakes.

But that’s not how it works in the world of show business. Her new husband is off filming and recording more often than he is at home. He sees more of his beautiful co-star than his own wife. Lily is finding it harder and harder to distinguish between performing and reality, adding more stress to a marriage that the tabloids already wager won’t last the year.

Lily’s new assistant quickly becomes indispensable, covering The Void’s social media while Lily pursues her own writing. When Lily learns that Jada is temporarily rooming with Void guitarist, Xander Phillips, she isn’t concerned. Xander has hard-and-fast rules when it comes to relationships with women. The only way he’ll break Jada’s heart is if he breaks all of his rules.

Even with Jada’s support, Lily struggles to adjust to her new life. From her own personal stalker and ongoing family drama to the constant bombardment from the media, she’s quickly reaching her breaking point. She’s about to learn if marrying a rock star will result in a beautiful finale…or in absolute disaster.

Jada wished the evening would never end. It seemed all too soon that everyone walked out to their cars to head home.

She merely headed to her car.

Home, sweet home, she thought with a sigh as she settled into the driver’s seat. When she was sure the rest of the band had gone and no one else in the parking lot was paying her any attention, she lowered the sun visor and looked at her reflection in the vanity mirror.

“Great job,” she told herself. “You busted your ass for this. You deserve it. Now stick with it and don’t ever fucking give up.”

Once upon a time, she would have felt sorry for herself that she was the only one she could turn to for support and encouragement, especially for such a huge moment. Now she chose to look at the bright side. At least she wouldn’t ever let herself down.

The restaurant closed an hour later. When the night manager turned the lock and spotted her sitting in her car, he frowned and headed over to her. She obligingly rolled down her window.

“Please, Nico? I swear it’s just for tonight. I was here celebrating my new job.”

That had the discomfort easing from Nico’s expression. “Is that right?”

“It is. I’ll only be mobile another couple weeks until I get my first paycheck. ‘Til then I just want to make sure I’m somewhere safe to sleep at night. This is a well-lit parking lot and I know you won’t call the cops on me.”

The faint sound of a throat clearing had Nico glancing over the roof of her car. Jada looked out the passenger side window to see who had interrupted. When she saw a camo T-shirt tucked into a pair of khaki cargo pants, her spine stiffened. Xander was too tall for her to see his face but there was no mistaking that spectacular body.

Had he heard their conversation?

“I think I left my phone earlier. Can you help me out?”

Nico immediately turned and walked back to the restaurant, fishing his keys out of his pocket as he went. Jada forced herself to stay calm. Xander had been standing on the far side of her car and that window hadn’t been open. He probably hadn’t heard anything, she assured herself.

She heard the sound of his heavy boots crunching gravel as he strolled over to her side of the car. It was impossible not to notice how gracefully he moved, like a powerful predator. Her hands gripped the steering wheel for no good reason other than she didn’t know what else to do with them. She swallowed audibly as Xander placed a hand on the roof of her car and leaned over so he was looking in her window. He was so close she could smell the mouth-watering scent of his aftershave.

Raine Thomas is the award-winning author of bestselling Young Adult and New Adult fiction. Known for character-driven stories that inspire the imagination, Raine has signed with multiple award-winning producer Chase Chenowith of Back Fence Productions to bring her popular Daughters of Saraqael trilogy to the big screen.

Raine is a proud indie author who is living the dream. When she isn’t writing or glued to e-mail or social networking sites, Raine can usually be found vacationing with her husband and daughter on one of Florida’s beautiful beaches or crossing the border to visit with her Canadian friends and relatives.