The True Adventures of Ralph the Giraffe 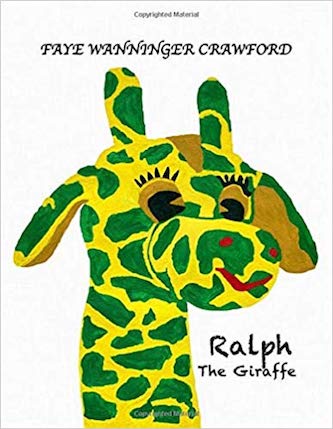 Faye Wanninger Crawford only hopes that the story and the adventures of Stan and Ralph bring as much laughter and happiness to other children as the big old giraffe did to her own.

When Ralph smiled, everyone within striking distance smiled with him.

Most believed Ralph was nothing more than a long-necked, three-foot-tall stuffed animal.

A toy and nothing else.

Don’t ever confuse Ralph with fiction.

Ralph is a true story, one that comes alive in a new children’s book developed and produced by Faye and Gerald Crawford.

For more than twenty-five years, Faye had been an elementary school teacher with a specialization in reading. She earned her Master’s Degree in Early Childhood.

Gerald had been the award-winning chief photographer for Southern Living Magazine and photography manager for Bass Anglers Sportsman Society. He was inducted into the Bass Fishing Hall of Fame for his photographic work.

Ralph came to live in the Crawford household when Stan was in elementary school in Chalkville, Alabama.

No one knew he was coming.

Faye was a member of the Chalkville Elementary P.T.A. when the school decided to sell Marathon candy bars as a fundraiser.

The top-selling student would win a television.

All of them wanted the new TV.

Other prizes were overlooked and ignored.

Faye’s committee kept up with sales.

Stan was in the lead.

No one was selling more than he.

She was proud of him.

And she happened to brag about the amount of money he had earned.

She should have kept quiet.

Nothing is more competitive than elementary school mothers.

One mother was bound and determined that her daughter would sell more candy than Stan.

Stan was left with second prize.

Stan was left with Ralph the Giraffe.

It was the beginning of a beautiful friendship.

Through the years, Stan’s imagination took him to many strange and wonderful and faraway places.

His imagination never left without Ralph.

But, alas, Stan grew up and graduated from high school.

He was too old for Ralph.

Ralph was left behind.

He was sold in a garage sale for four dollars.

The house was empty because Stan was gone.

It was lonely because no one could see Ralph smiling anymore.

Ralph had looked so sad.

Ralph’s head was hanging when he was driven away.

You simply don’t sell a member of the family.

Her mother took four dollars out of her purse, drove to the house of the lady who had purchased Ralph, and bought him back.

His head was no longer hanging.

He was passed down to Faye’s daughter, and when the family moved, Deitra carefully placed Ralph in his own personal box and stuck pinholes in the side so he would be able to breathe.

Faye’s mother suggested she write the story of Ralph.

Faye began rhyming those first words sitting on the patio of her Alabama home in 1992.

She had the story in her mind.

She had lived it.

But what about the illustrations?

In frustration, she set the book aside.

While attending Auburn University Montgomery, Faye was assigned to write an original book.

She turned again to Ralph, and her brother Bobby, an architect, sketched some poses of the big, lovable giraffe.

She earned her grade.

Ralph never left the pages of a story told but unpublished.

Now so many years later, the book has finally been completed, thanks to Gerald’s touch-and-go design expertise on the computer.

The images are big.

My own grandchildren believe they look three dimensional.

Carol Toberny wrote: “I love everything about the book – how you gave him such a cute personality. I kept finding myself wanting to give him a big hug. And how you developed his relationship with Stan. Each of your illustrations beautifully enhances the story. I was smiling when I finished reading the book, and I smile every time I think about it.”

Faye only hopes that the story and the adventures of Stan and Ralph bring as much laughter and happiness to other children as the big old giraffe did to her own.

Somewhere a television set rests in peace in a dumping ground.

Ralph is alive and well.

Ralph has no intention of leaving.

Please click HERE to find Ralph the Giraffe on Amazon.