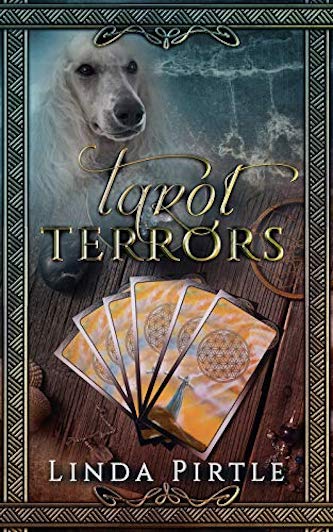 Who’s guilty? Who’s innocent? And what secrets do they have to hide? An excerpt from Linda Pirtle’s newest cozy mystery.

Who’s guilty? Who’s innocent? And what secrets do they have to hide?

FIVE MILES EAST of Tucumcari, New Mexico, Lillian steered her RV into a mom and pop convenience store/gasoline station. She stopped beside the first pump and killed the engine.

Her husband Bill, a retired journalist who had been asleep in the passenger seat opened his eyes. He ran his hand through his receding gray hair and asked, “Why are we stopping?”

Lillian looked at him and said, “Sorry to wake you, but I’ve driven on fumes for the last twenty miles – just hated to stop – didn’t want to ruin your nap.”

Bill rubbed his eyes with his knuckles and nodded. “While I pump the gasoline, why don’t you go inside and buy us a soda and some cheese crackers?”

She tucked her cell phone into the hip pocket of her skinny white jeans and left Bill pumping the gasoline. Her white Standard Poodle Eli stood beside Bill, patiently waiting for a walk. On the way into the store, Lillian felt her cell phone vibrate and then heard the buzz, buzz of an alert.

That’s either an Amber alert or a Silver alert. I’ll read it later.

She pushed the store’s door open. The moment she stepped inside, she expected a friendly greeting from the cashier. However, Lillian saw only his back. He was leaning against the counter, shoulders shaking. She knew something was wrong. When the tall, broad-shouldered man wearing bib overalls, finally faced her, she was momentarily stunned. Staring back at her was a picture of abject misery. A river of tears spilled from his crystal-clear blue eyes, tracing the outline of his white, handle-bar mustache.

“What’s wrong? Can I help you?” Lillian asked.

“No, ma’am,” he said, pulling a red bandana from his hip pocket and making a broad swipe across his face. “I guess you haven’t heard the news?”

“I’ve not had the radio inside my RV turned on, so no, I haven’t heard anything.”

“The worst thing that could happen to the USA just happened ten minutes ago,” he said, dabbing the stubborn storm determined to drip from his eyes and pointing to the flat-screen television attached to the wall behind the counter.

Lillian looked up at the monitor. A hard, cold knot crawled inside her abdomen. A newscaster stood in front of a school building. Oh no, not another school shooting, she thought. In the background, Lillian heard a chorus of sirens. The camera switched to reveal a cadre of police cars blocking both sides of the street, red and blue lights flashing.

The reporter at the scene asked the cameraman to scan a crowd of people held at bay by police officers. Onlookers lined the sidewalk across the street. Some were openly weeping. Others looked to be in shock. By the scowls on their faces, many of the spectators were angry. All of the men in the crowd had removed their hats.

Lillian turned her attention to the familiar face of a FOX Newsman and listened.

I’m standing in front of the Liberty Union Elementary School where President Stuart Henry attended the graduation ceremony of his only granddaughter early this morning.

As President Henry and his family left the school’s auditorium, a volley of gunshots were heard. A secret service agent threw himself on top of the President in an attempt to save the President’s life. We’ve just learned the agent did not survive the attack. His name is being withheld pending notification of his family.

The President has been transported to Saint Thomas Hospital which is only a few blocks away from the school. We are waiting to hear about his condition and will bring it to you as soon as we have an official report from the hospital.

Lillian watched in horror as paramedics surrounded by secret service men loaded a gurney into a waiting ambulance.

“There must be more people who were shot, don’t you think?” the clerk asked.

Lillian didn’t answer his question. She ran back outside and saw Bill walking Eli. She waved and yelled, “Bill, hurry. We have to go. Come Quick.”

She climbed into the RV and started the motor. By the time Bill and Eli joined her, Lillian had pulled her long, gray hair up into a loose pony tail and turned on the radio, searching for the Fox News Channel on Sirius.

“Someone has shot President Henry. Listen.”

Silence, then static filled the airwaves. Then, Lillian heard the shattered, solemn voice of a newsman: At nine forty-five this morning, our country lost its leader. President Stuart Henry was shot down walking down the steps of Liberty Union Elementary School where he had just attended the Kindergarten graduation of his five-year-old granddaughter.

We at KTQB extend our sincere condolences to the first lady and to the first family. You are in our thoughts and prayers.

Chief Justice and members of the cabinet are on their way to the White House where Vice President Gordon Dalworth will be sworn in as the President of the United States. Coverage of the ceremony will be aired as it occurs.

Lillian wiped away tears that dribbled down her cheeks. As soon as the broadcast ended, she eased the RV onto the highway taking her and Bill to Santa Fe, New Mexico.