Thursday Sampler: When The Starlings Take Flight by Sue Joslin 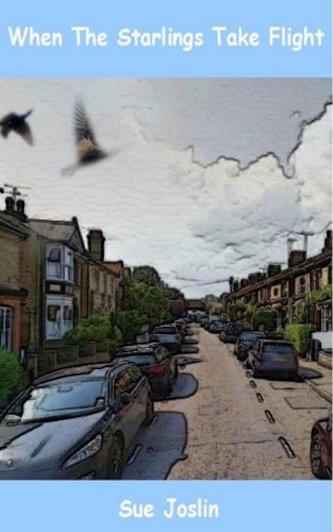 A tale of planes that won’t stay up, cannibals who play with their dinner and teenagers who should know better.

As the daughter of an up and coming artist, now a bespoke illustrator, and an art historian, turned cleric, the author spent much of her childhood, moving from one home to another.

Eventually, at the age of 32 and having worked in a variety of jobs, including dairymaid, and accountant, she entered the world of counselling.

Six years later, as a volunteer counsellor for Victim Support and part time Post Office clerk, she finally found herself in a position to pursue her love of writing and began her first novel, Jenny’s Choice, which was nominated for the 2003 Mann Booker Prize.

Using her knowledge of how people react in adverse situations, she weaves her stories around human vulnerability.

It was the cold that woke the two boys, and it was the sheep that had saved them so that they did wake.

Although cold, the body warmth of the small flock had been enough to raise the temperature from deadly to being merely dangerously low.

Neither of them had slept well on the hard ground, and from time to time their bodies had been wracked by violent bouts of shivering.

Outside their inadequate shelter, the snow was still falling, as it had been all night. The sky was heavy and dull with the promise of yet more to come.

They lay for a while without speaking as they considered their plight, each lost in his own private misery. In the end, it was Jack who broke the silence.

“What are we going to do now?” he asked, quietly.

Pork looked through the gaps in the stone work, at the bleak white world that surrounded them. “I don’t know.” he replied. He felt lethargic and listless.

“We could try again and walk the other way,” Jack suggested hopefully. “Maybe there is a cottage or a road not too far away”.

Pork shook his head. “We could walk right past a house in this lot and not know it. And with the snow as deep as it looks, we would have no hope of knowing if there was a road under it or not.”

“But we can’t just sit here and do nothing. We’ll never get home if we don’t try!” Jack sounded scared and close to tears.

Pork did not feel much happier himself, but he tried to put on a brave face for his friend’s sake. “I’m not saying we don’t try, just that we shouldn’t try now. If we wait until the snow stops and it brightens up a bit, then at least we can see where we’re going and won’t miss any help that might be out there.”

“How long do you think it will be before we can try, then?” asked Jack, who felt totally lost and helpless. It seemed crazy that such an indoors type like Pork should seem to know so much about being lost in a snow storm, but his friend suddenly seemed so solid and dependable.

Pork wanted to shout “Why are you asking me? How the hell should I know? I’m not a fortune teller!” But, seeing the desperate look on Jack’s face, he merely replied “Dunno, but surely it can’t be long. Not when it’s snowing this heavy. I reckon it’s like rain; the harder it falls, the quicker it stops.”

Trying to lighten the mood a little, Pork gave a rueful grin. “My parents are going to kill me when they get their hands on me. Can’t you just hear my mum when I ring her from some phone box in deepest Sheepshagshire and ask for a lift home?”

“You’re going to come clean and ask for a lift instead of hitchhiking?” Jack was surprised. He had still been working on the assumption that hours of trudging through snow still had to be followed by hours of standing around thumbing lifts. And all on one Mars bar, the thought of which was beginning to make him hallucinate, he was so hungry.

“Right now, I can’t think of anything nicer than being grounded. Just think of it, weeks on end of being forced to stay curled up in a nice warm bed. By the time I’m allowed out again it will be summer and nice enough to want to go out.” Pork’s face wore a dreamy expression as thoughts of watching the rain and snow from the warmth of his bedroom, drifted through his mind.

“What do you mean, you want me to collect you! I’m not your taxi service! You wait till I get you home! You’ve lied to me!…..”

Jack squawked in a painfully high, falsetto voice, which had more in common with a Monty Python sketch than Pork’s Mother.

Pork snorted, “What about your Mum, then?”

“You stupid boy, fancy going out without your woolly hat. And what have I told you about wearing clean underwear!”

This in his best vicar’s wife voice.

This had the two boys giggling fit to bust, until Jack sobered up and added somberly. “But first, we’ve got to get out of here.”

Please click HERE to find When the Starlings Take Flight on Amazon.