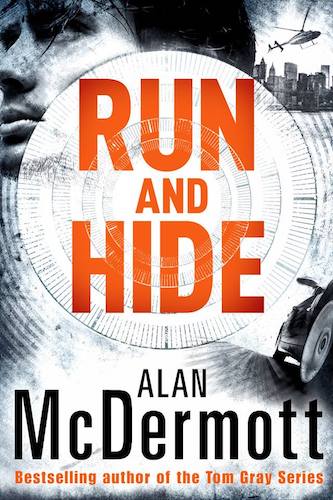 There’s only so long you can run for your life. Read an excerpt from Alan McDermott’s new thriller.

Eva Driscoll is used to chasing down bad guys, but now the bad guys are chasing her. She knows they won’t stop until she’s dead.

After her brother is killed in a faked suicide, Driscoll teams up with ex-soldier Rees Colback, the one person who can help her find answers. Together they’re determined to uncover why members of his Special Forces squad are dying in mysterious circumstances.

But with every agency in the country in hot pursuit, their only choice is to flee.

The clock is ticking. They can’t run forever. It’s time to make a choice: kill or be killed …

The weather couldn’t have been more accommodating. After more than three weeks of glorious sunshine, the thunderstorm was welcomed by both farmers and trained assassins alike.

The pounding rain helped drown out the sound of Eva’s approach to the house, an expensive and expansive replica of a Mexican hacienda. It was all terracotta tiles and archways, and she could see the two guards taking cover from the storm. They were patrolling the first floor, letting the second-floor balcony protect them from the downpour.

Eva had been watching them for a couple of hours, and their drill remained constant: one covering the east side and the rear of the building, the other watching the front and west. It took each of them two minutes to cover their half of the house, then another two to walk back and meet up on the corner. She noticed that they never spoke, only acknowledged that the other was still alive and doing his job before the patrolling started once more.

Eva had no idea when the shifts would change, but guessed it would be at the top of the hour. She decided to strike at 2:20 a.m. That would give them fifteen minutes to make their way through the trees that surrounded Alexander Mumford’s villa and get to the back of the house, where she would make her entry. She’d scouted it out already and identified a way in through the door at the rear: it was the perfect place to launch the attack.

She was a hundred yards from the house, ten yards inside the tree line, so Eva wasn’t worried about being seen by the guards. If there were any motion sensors or CCTV cameras in the woods, they would have known about it by now. She had the rest of the team in place with three minutes to spare, only Farooq sitting this one out.

The guard reached the corner of the house and met his companion, then turned and slowly retraced his steps, his eyes always on the trees. Eva waited until he turned the corner then broke cover and ran across the manicured lawn. It took twenty seconds to reach the back wall, and she leaned against it for a few seconds as she brought her breathing under control. The guard would reach the corner again in around a minute.

Eva crouched as she crept past a window, then straightened as she reached the end of the wall. She heard the approaching footsteps just as the guard’s shadow came into view, and tightened her grip on the rubber-handled knife. Her pulse raced as adrenaline surged through her body, every sinew poised to strike. The guard appeared, but not where Eva expected him to be. He was half a yard farther away than she’d anticipated, and she had to adjust her feet as she lunged at him. The knife was inches from the man’s throat when he twisted sideways, bringing his rifle up in the same movement. Eva missed his neck by millimeters, but followed through with her elbow and felt the satisfying crunch of cartilage as the guard’s nose imploded.

He staggered backward and tried to bring his weapon up again, but Eva was too quick for him. The top of her boot connected with his groin and, as he doubled over, she reversed the knife and plunged it into the base of his skull. Spinal cord severed, the man went limp and collapsed to the ground, his rifle clattering onto the tiles. Eva pulled the knife free and ran as silently as she could to the far corner of the house to intercept the other guard. She’d lost precious seconds in the skirmish, and it was about to prove costly.

Eva was still five yards from the corner when the other guard appeared. His rifle rose to his shoulder in an instant and the sharp crack of a round reached her ears. The fact she heard it meant she was still alive, which was more than could be said for the guard. His head jerked sideways as a bullet slammed into his temple, and he dropped like a sack of rocks.

Much as Eva was relieved to still be breathing, the noise was a disaster. Police or other reinforcements would soon be on their way, so her plan to interrogate Alexander Mumford was blown.

She could still make a statement though.

Alan McDermott is a husband, father to beautiful twin girls, and a full-time author. Alan lives in the south of England, and in 2014 he swapped writing critical application for the NHS to penning thrillers that have gone on to sell close to a million copies.

His debut novel, Gray Justice, was well received and earned him membership of Independent Authors International.

That book launched in July 2011, and by the time he’d written the follow-ups, Gray Resurrection and Gray Redemption, it had attracted the attention of a major publisher. Alan signed with Thomas & Mercer in 2013 and has now written six novels in the Tom Gray series and a spinoff called Trojan.

Please click HERE to find Run and Hide on Amazon.