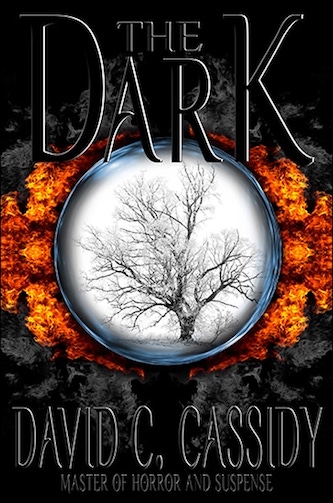 When an innocent little boy is twisted into an agent of evil, the world is forever changed, devoured by an even greater evil—the Dark.

Award-winning author David C. Cassidy draws you into a realm of terror, a world unlike any other. With the inspired flair of Clive Barker and the pulse-pounding beat of Stephen King, The Dark will leave you breathless, reminding us all that for all we desire there is always a price, the currency in suffering and sacrifice. Brimming with insidious evil and a nerve-wracking pace that never lets up, this story will grab hold of your most primitive fears and crank them up to Warp 10—and won’t let go.

IT KNOWS WHAT YOU WANT.

IT KNOWS WHAT YOU NEED.

In denial over his father’s death in a horrific accident, Kelan Lisk has grown fearful and withdrawn. For this meek and bullied child, a burning desire to tame a deadly sledding hill consumes him, drawing him inside a wondrous place where anything is possible … including his father. But as this strange new realm spills into this one, twisting an innocent little boy into an agent of evil, the world is forever changed, devoured by an even greater evil—the Dark.

Standing at his chopping block, Harmon Wyatt spun around. His ax was poised, ready to strike fire into the heart of the sorry son of a bitch who had snuck up on him. Yet all he saw were woods, as far as his old eyes could take him.

Not thirty yards from where he stood, a pair of pine crosses stirred horror within him. He relived it all in an instant. And before his terror could best him with a scream, he forced his gaze away, into the woods.

The nape of his neck grew cold as the gray hairs there stood on end. His grip on the ax tightened.

There was a shift at that precise moment, a bad turn in the way of things. He could not put his finger on it, yet somehow, in some dark and elusive way, the world changed.

As it had come to him yesterday as the light had fled, it had come to him now, a preying darkness reborn, aching from desires ancient and gross. There was no mistaking its hold over him, no subtlety to its message. It wanted. It needed. And it would take what it chose. He had faced it long ago, when he still held the fight of a younger man. The fight that had carried him. But for him to rise against it now … no mountain could loom higher.

Harmon turned to the graves. Their crude markers were barely visible, two wooden stubs buried in the snow. He moved closer, only a yard, and no farther. His fear—his guilt—sent him hustling to the back door in terror.

Something was out there. Something cold and wicked. And though it had been thirty years if a day, he knew what it was; knew its black work was unfinished.

Trembling, he set his ax beside the step and retreated inside. His legs nearly buckled as he huddled against the door. He feared he might lose his grip, just as he had last night. Only sheer will steeled him against his fright.

He stood in the cramped kitchen. The woodstove crackled. Don Maclean sang American Pie on his portable radio. The volume was low, but it was loud enough to make him rush across the room and kill the music with a hard slap to the power button.

He stuffed his work gloves in his pockets, then ducked below the small round window at the door. He rose slowly and peered through the grimy glass.

He grabbed a beer from the fridge, an old Westinghouse with a wonky handle. His trembling fingers struggled with the bottle cap, finally getting it off.

He sat at his kitchen table. Don’t you look, he told himself. Don’t you dare look.But as he had countless times before, in his sleeping nightmares and in his waking ones, he did look. To the top of the fridge, to a small wooden box that lay in wait amid a clutter of junk.

“You ain’t real,” he said, and guzzled the entire brew. He wiped his lips on his sleeve and tossed the bottle to the floor. He fetched another. “No more you ain’t … no more.”

But he knew. Knew it to be as real as the two shallow graves buried beneath the snow.

It was real, and he knew what it was.