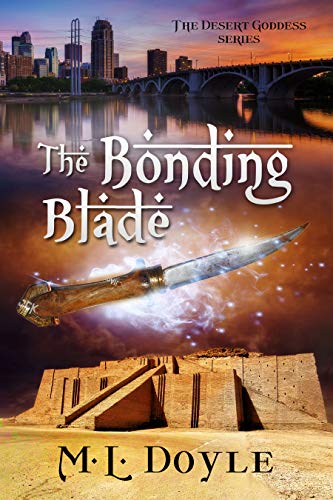 The follow-up to M.L. Doyle’s acclaimed The Bonding Spell is out today on Amazon

Can the embodiment of an ancient goddess live a balanced life in modern times?

Former Army Sergeant Hester Trueblood struggles to find the answer, seven years after fate bonded her to the ancient Sumerian Goddess, Inanna. Whether engaging in battles to the death with demons or entering fight club scraps, Hester’s life is forever subjected to Inanna’s whims and insatiable lust. It hasn’t been easy to juggle the mounting perilous challenges or to tolerate the demands of her demi-god lover, Gilgamesh.

When her warrior Quincy is stricken with a mysterious illness, Hester thinks a supernatural blade could be the answer to save him. Or it just might destroy the world.

One thing is for sure. Nobody is immune from the painful reality of loss and suffering—not even a goddess.

I checked my cell phone for the time again. Waiting for Fredricks began to grate at my nerves. “How does he manage to make an immortal feel like she’ll die before he finds what he’s looking for?”

Gil flashed his teeth at me before turning his most intimidating glare to the wizard.

“I thought you knew where everything was in this hovel of yours,” Gil said. “What is taking you so long?”

“I apologize, my lord. There are many references to blood contracts and many more that claim to be a way to break the contract, but upon further inspection, the breakage usually involves the death of the person who entered into the agreement.”

“Well, that won’t suit our purposes, will it, wizard?” I said.

“No, my goddess. I understand. I think I’m getting close.” He held a large book open, his hand skimming over the words. “This one is a bit different. I’m just working out the translation now, but roughly it says, ah… blood is the permanent bond for which the promise lives. Ah, it goes on, and this was the part I was unsure of. Oh yes, right here it says, ‘but the trials of Shamash bring the … the …  I just can’t figure out this word. Sword maybe? The dagger?”

“Blade,” Gil said, his voice heavy. He leaned both hands on the table in the center of the room. “The blade of Utu.”

Fredricks and I waited for him to elaborate, but he didn’t.

He straightened, ran a hand through his hair and took a deep breath. “You won’t like it, my queen.”

I crossed my arms and leaned a hip against the table. “I don’t like what’s happening to my Quinn now, sooooo…”

Gil held his hand out to Fredricks, who hefted the large tome into his hand. Gil held it up as if it weighed nothing. He skimmed the page, running his finger back and forth over the same passage a few times. His face hardened as he read. Finally, his gaze flicked up to me. “You know of Utu?”

I was so happy when that one was crushed into oblivion, Inanna said.

“Nope, but evidently, Inanna does.”

“I would hope she would. Utu is or was the lord of justice in her time. He meted out punishments, adjudicated disputes …”

“And contracts, I assume.”

“Exactly. He is quite well known for having several items which, after his death, could be used to determine the right and the wrong of things as he did while alive. A staff that would bend and twist when someone told a lie. A ring that would glow to identify the righteous party.”

“Handy. Too bad we don’t have doodads like that these days. Are you saying one of these items could be used to break Quinn’s contract?”

“No. Both of the items I spoke of were destroyed.”

“How do you know that? And how could an immortal die in the first place?”

Gil lay the large book on the table and leaned over it, a rigid set to his shoulders. “I know this because I killed him myself, and destroyed his talismans.”

Fredricks shrank back, sucking in air with a hiss, his hand to his throat. The drama queen.

I waited for Gil to elaborate, but he didn’t. The longer I waited, the more disturbed he looked. Finally, he slammed the book shut and picked it up, holding his hand out to me.

“We’ll be back, wizard. Speak to no one about this.”

M.L. Doyle aimed to prove her brother wrong when she joined the Army on his dare. Almost two decades later, she not only confirmed that she could, contrary to his warning, make it through basic training, her combat boots took her to the butt-end of nowhere and back countless times and she lived to tell about it … or write about it as it turned out.

Mary’s essays, reviews, and interviews have appeared in The War Horse, The Wrath-Bearing Tree, The Goodman project, The World War One Centennial Commission WWrite Blog and O-Dark Thirty.

A native Minnesotan, Mary lives in Baltimore where her evil cats force her to feed and care for them including cleaning up their poo. To escape from her torture, Mary loves to hear from readers. Check her out on Facebook.com/mldoyleauthor, or Twitter @mldoyleauthor, and you can read excerpts of all of her work on her website at www.mldoyleauthor.com.

Please click HERE to find The Bonding Blade on Amazon.