The writing world according to John Irving

I THINK I WAS FASCINATED by John Irving’s titles long before I really plunged into the stories locked away in his novels.

After all, who can resist such books as The World According to Garp, A Prayer for Owen Meaney, and A Widow for One Year.

Those titles intrigued me.

They made me want to open the book and see what lay scattered on pages scripted by John Irving.

For a long time, John Irving was like thousands of other writers in America.

He wrote a book.

He didn’t sell many copies.

Then out of the blue, The World According to Garp was one of three books recommended to the Pulitzer Advisory Board for consideration for the 1979 Award for Fiction.

He has written thirteen novels, and nine became bestsellers.

John Irving told the Paris Review: “I don’t give myself time off or make myself work; I have no work routine. I am compulsive about writing, I need to do it the way I need sleep and exercise and food and sex; I can go without it for a while, but then I need it.

“One luxury of making enough money to support myself as a writer is that I can afford to have those eight-, nine-, and twelve-hour days. I resented having to teach and coach, not because I disliked teaching or coaching or wrestling but because I had no time to write. Ask a doctor to be a doctor two hours a day.

“An eight-hour day at the typewriter is easy; and two hours of reading over material in the evening, too. That’s routine. Then when the time to finish the book comes, it’s back to those two- and three-hour days. Finishing, like beginning, is more careful work.

“I write very quickly; I rewrite very slowly. It takes me nearly as long to rewrite a book as it does to get the first draft. I can write more quickly than I can read.”

I was intrigued when I read Irving’s book: My Movie Business: A Memoir.

Irving made a statement that startled me.

He said, “When I feel like being a director, I write a novel.”

I had never thought about it in those terms.

But when we write novels, we are our own scriptwriter and director. We cast the characters, we move the pieces of the story around like pawns on a chessboard,

we are in total control.

How does John Irving, the director, assemble his story?

He told the Paris Review: “I have last chapters in my mind before I see first chapters, too. I usually begin with endings, with a sense of aftermath, of dust settling, of epilogue. I love plot, and how can you plot a novel if you don’t know the ending first? How do you know how to introduce a character if you don’t know how he ends up? You might say I back into a novel.

Irving also left us with these words of wisdom:

Secrets of the Dead is the first book in my Ambrose Lincoln series. Irving and I do have one thing in common. I write the ending of my book first, too. 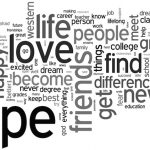