I’m sure you have traveled some odd roads that took you to odd towns as well. Send us travel stories about your favorite towns with strange names. America is full of them. We are looking for your favorite travel stories about any place on earth and will publish them on this site as well as in an anthology at the end of the year. It’s free. It’s simple. Just email them to [email protected] If you have a great photograph, send that on as well.

Let’s Explore the World together. 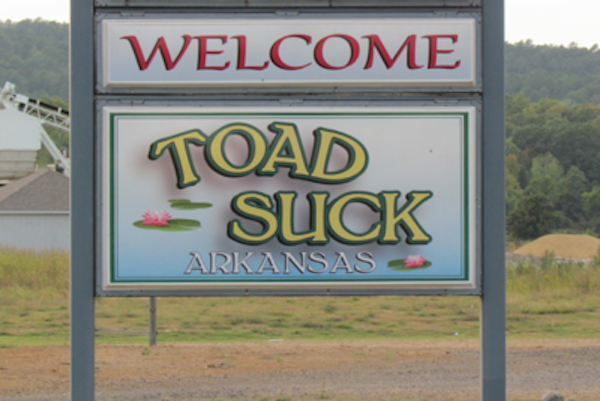 I have traveled down the back roads through most of this country, and I prefer the small towns. When you drive through some of them, you feel as though you may have taken a wrong road and wandered lost into never-never land.

They say a town is known by its name.

However, there are some nice little towns with odd names. Here are the five strangest villages I have ever discovered, most quite by accident.

Toad Suck, Arkansas: When steamboats churned up the Arkansas River, they would reach a little hamlet beside the dam and dock until the water level rose high enough in the locks for them to continue their journey. While the captain and crew were waiting, they would wander over to the tavern and, it’s said, soak up enough whiskey to swell up like toads.

Hell, Michigan: Back in the 1840s, a little town was nailed to the earth, and an old settler was asked what it should be named. He shrugged and said, “I don’t care. You can call it hell if you want to,” and so did. Michigan, in winter, may be the only place on earth where you can see Hell freeze over.

Frankenstein, Missouri: Don’t be deceived. The little community was not named for the monster who lived among the demons in Mary Shelley’s mind. It was named for an early settler named Gottfried Franken, who donated land so a church could be built.

Knockemstiff, Ohio: Some say the name arose after a brawl while the town was being built. Some swear a woman told the preacher that her husband was cheating on her and asked what she should do. “Knock him stiff,” the preacher said. And other sources say the name was derived from a slang term for moonshine whiskey. There were a number of stills throughout the countryside. Knockemstiff is now a ghost town.

Cut and Shoot, Texas: The name originated when the town was being built in the Big Thicket and a dispute arose at the church. It is not clear whether tempers flared over the design of the steeple, over who was going to preach that day, or which land had been stolen. But one little wide-eyed boy stood up and announced that when the shooting started, he was going to cut around the corner and shoot through the bushes.

My Confessions from the Road contains a collection of travel stories about people I’ve met and places I’ve Been. Please click HERE to find the book on Amazon.