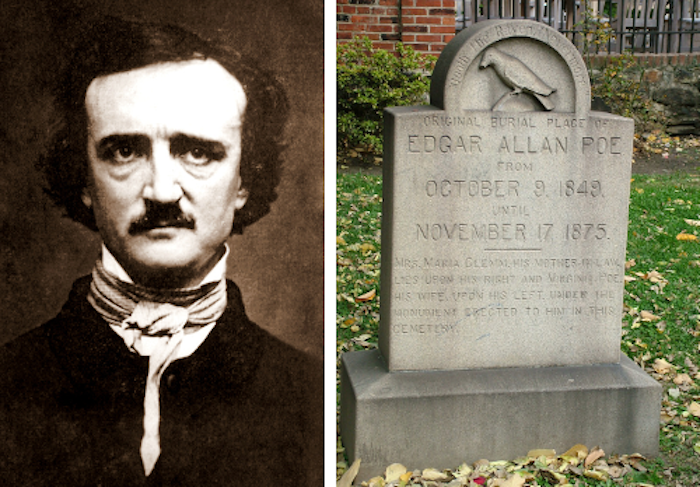 The stranger drank a long toast from the cognac bottle, then bent over and kissed the relief image of the poet carved into the headstone.

The lone figure who came year after year for six decades on the date of Poe’s death to place roses and cognac on Poe’s grave was and is a mystery.

Three years ago, he came no more.

As a chilled January 19 night cast its darkness across the streets of Baltimore, those who gathered around the city’s historic Westminister Hall and Burying Grounds waited and watched, as they always did, for the appearance of a tall, gaunt man, dressed in black, wearing a white scarf and wide-brimmed hat.

He never stopped. He never spoke. His eyes never wavered.

He simply marched respectfully to the grave of the man who, some believe, invented the detective novel genre and placed a bottle of cognac and three roses at the base of the tombstone.

His tribute was short. It was silent.

If he had a name, and surely he did, he kept it to himself.

He would turn, walk back through the iron gates, and vanish with the night.

No name. No words. Nothing but roses and cognac.

He came at no appointed hour. But it was always late.

And he came first on the night of 1949, a century after Poe’s demise, to mark the passing of a tortured and tormented literary genius who had penned such macabre masterpieces as “The Tell-Tale Heart,” “The Pit and the Pendulum,” and “The Fall of the House of Usher.”

The life of Edgar Allan Poe was as disturbing as his writings. He was the second child of an actor and actress. His father abandoned the family in 1810, and his mother died of consumption a year later. He was taken into the home of a wealthy merchant but never adopted. There was always a chasm between Poe and the man caring for him. In time, he married his 13-year-old cousin, but she died far too young. And Poe drifted from newspaper to literary journal to poverty.

In 1845, he wrote and published “The Raven” in the EVENING MIRROR, and the poem became a literary sensation. His name was celebrated on every street corner. He was usually drunk on an abandoned street corner. He had been paid nine dollars for the poem.

Four years later, Edgar Allan Poe was dead. On an October night, he was found delirious on the streets of Baltimore by a man, who told the press: “He was in great distress and in need of immediate assistance.” He died four days later in the Washington College Hospital. Even the cause of his death was a mystery, with speculation ranging from DELIRIUM TREMENS, heart disease, congestion of the brain, epilepsy, syphilis, meningeal inflammation, and cholera to rabies.

His passing was never announced publicly. Only ten came to his funeral. He was buried with little pomp and absolutely no circumstance.

His books lived on. His name became legend in literary circles.

In 1949, with the coming of a stranger carrying three roses and cognac, Poe gained a measure of notoriety once more.

Jeff Jerome, the curator of the Poe House, recalls the first time he glanced from the window of the Presbyterian Church beside the burying ground and witnessed a sight that would forever haunt him: “Seeing this dark figure coming down the street with his cloak flowing, the wide-brimmed dark hat, all black – I don’t think I will ever forget what I saw that night. It was mesmerizing.

“The stranger did not creep into the rear of the cemetery. Instead, he strode up to the monument in front of the church, drank a long toast from the cognac bottle, then bent over and kissed the relief image of the poet carved into the monument.

“He looked sinister, but it was a tender and unexpected moment to see this dark, brooding figure do something so touching.”

By 1993, the enigmatic stranger had lost some of his swagger. His walk was more of a shuffle. He left a cryptic note upon the roses that said: “The torch will be passed.”

The tradition continued until 2009. It did not fade. It simply passed away. Jerome and the fans of Edgar Allan Poe continued to watch and wait. Four imposters came a year ago. One man arrived in a white stretch limousine. An older man followed him. Then came two women. All had roses and cognac. All drank a toast.

But something was wrong.

None of them gave the secret signal that Jerome knows so well. None of them placed the roses in a cryptic pattern begun on a cold night in 1949.

Was it over? Would the enigmatic stranger ever come again?

Jerome shrugged. He doesn’t know. But quoth the Raven: “Nevermore

Confessions from the Road is a collection of travel stories about places and people I’ve met along my journeys. Please click HERE to find the book on amazon.