The Writing Traveler: On the Road with Tasmanian Devils by Maryann Miller

We hadn’t gone far when the thought of saying, “Oh, hell, let’s go home and paint the garage” became a real temptation.

The first hour of traveling was taken up with making plans for all the fun the kids were going to have visiting relatives. I don’t think they had any concept of the hours and hours of riding in the car that would precede that fun. The way they talked I’m sure they thought it would only take a half hour to get from Texas to Michigan. Something I’m sure Carl wished was true. Driving with the kids was not his idea of a good time. Sometimes he didn’t even farewell with a two-mile trip to church on Sunday.

The kids rode in the back of the van in a space we had created for them to play, and when the time came, to sleep.  (This was long before mandatory seat belts or car seats for kids, and lots of families traveled this way.) We had one bench seat across the very back of the van, and the rest of the space up to the captains’ chairs was empty. That’s where we put a small mattress and several sleeping bags, and all the kids.

When I came up with the idea for this arrangement, it was with this idyllic vision of the kids playing quietly in the back, while Carl and I listened to music and had a meaningful conversation.

The kids were wild as Tasmanian devils, and we’d barely gone a mile before I started to wonder if taking five kids on a 1200-mile trip was really such a hot idea. Not to mention the fact that we would have to go another 1200 miles to get home again.

The thought of saying, “Oh, hell, let’s go home and paint the garage” was tempting. But I knew Carl would rag on me forever for changing my mind. Plus, one look at the eager young faces of the kids quelled any thought of abandoning the adventure.

That settled them down a bit, and everything was peaceful for an hour or so. Then they started squabbling, which soon deteriorated into full-fledged fighting with parts of the car bingo game flying around the back of the van. Danielle refused to take a nap, no matter how hard we tried to get her to lie down, so I went to the back of the van to keep game parts from hitting the back of Carl’s head. The twins took that as an open invitation to use me for a trampoline, so considering the noise, the jumping, and the crushed Cheeto’s all over the mattress, I quickly retreated to the front seat, leaving the mess with the kids.

By lunchtime, we were all more than ready to stop for a while to see if we could straighten our cramped bodies from the sitting position to a standing one. But somehow the kids weren’t nearly as anxious to run around and make noise as they had been in the van. In fact, mealtimes were the only real quiet times of the whole trip.

When we pulled into another rest area for supper, it was an instant replay of the lunch break.  The kids sat quietly at the picnic table, ignoring all the grass that just called for little feet to scamper all over it.

After we finished eating, we tried to get everyone to get one last drink and go potty so we wouldn’t have to stop again for a while. No matter how hard we tried to avoid frequent stops, nobody had to go potty when we needed gas, but fifteen minutes later one of them simply wouldn’t be able to wait another second.

We made two quick stops between six and ten, and then the kids finally fell asleep. Thank you, God.

Of course, at this point, Carl and I were too tired to have a meaningful conversation, and we avoided the music so we wouldn’t disturb the kids.

About midnight, we decided to do a drive-through for a cup of coffee. We realized we were hungry and wanted something other than stale Cheetos, so we decided to get hamburgers.  We thought if we didn’t turn off the engine the kids would not wake up, but that was a short-lived dream. The cashier had just handed Carl the coffee and burgers when the kids popped up, one at a time like they were all trying to be a jack-in-the-box. They also appeared to be quite wide awake.

Since we hadn’t planned to get them hamburgers, we tried to hide ours in the front until the kids went back to sleep. But that wasn’t happening.

“What do you have?” David asked.

“Coffee,” I answered. “We need caffeine to stay awake to drive.”

“Uh,” Do I lie so I don’t have to explain why we don’t have burgers for them? Or do I try to figure out how to share two sandwiches among seven people?

I’m good, but not that good.

I glanced at Carl for help.

“Um… I don’t think so,” he said, hastily dropping his burger in the center console. “Must be your imagination.”

Keeping my eyes straight ahead, I slid the McDonald’s bag to the floor between my feet and leaned my head against the window. Maybe if it looked like I was going to sleep, the kids would take the hint.

Yeah, that would happen about the same time that cats would do what they’re told.

After a half-hour of waiting, we decided to eat the hamburgers despite the fact that Anjanette was still awake. The next day she said, “I know you and daddy had hamburgers last night.”

I told her to chalk that one up to “driver’s special privileges” and not take it personally.

So went the first leg of our trip which took us to Richmond, Kentucky, and by that time we were irrevocably committed to the vacation.

Maryann Miller is the author of the humorous A Dead Tomato Plant and a Paycheck. Please click HERE to find the book on Amazon. 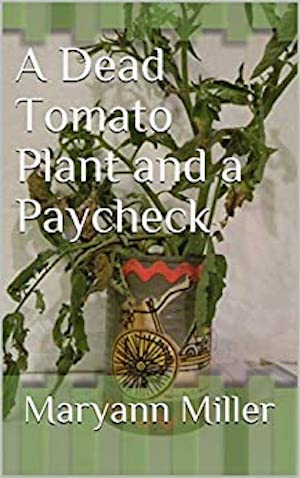