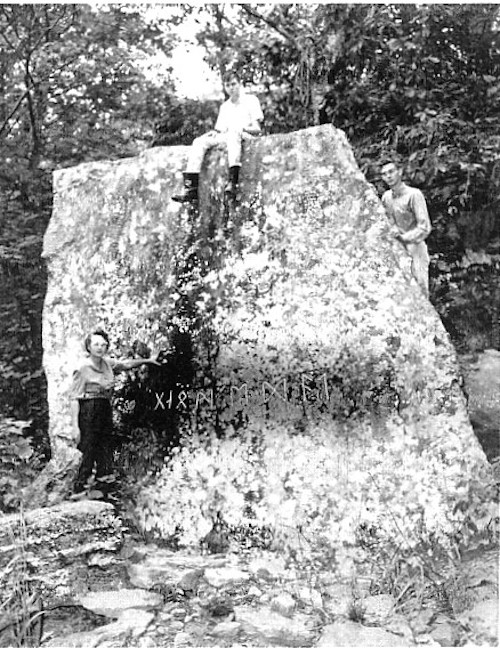 Is it possible that a Viking ship made its way up the Mississippi and Arkansas Rivers to the land that became Oklahoma only to be trapped and unable to return?

IT WAS A MESSAGE from the past, carved into stone by an unknown hand, leaving behind an unknown message on a land that was known only by the reptiles and varmints who made sure that no one came unless he was lost and never stayed for long, whether he was lost or not.

Perhaps it was merely a road sign where no road passed by, or maybe a marker left above a tomb obscured by cobwebs of age and neglect, spun by spiders that found refuge among the strange assortment of timber that hung onto the steep slopes of Oklahoma’s Poteau Mountain.

It had been jammed into the good earth like a road sign. Then she noticed the writing. So old she could barely read it. So odd that it frightened her. Then she realized she couldn’t read it at all.

“The early settlers came up here when bear hides were a better cash crop than cotton,” she told me. “They found the stone, but my grandfather said they weren’t puzzled or perturbed by it at all. They figured it was an Indian rock.”

Nobody doubted that it was, nobody except the Indians. In the 1830s, a band of wandering Choctaws had found the curious stone, and they weren’t able to make sense of the writing either. They left it alone and rode elsewhere. What they were supposed to know, the spirits would let them know. The unknown should remain unknown.

Scholars came to stare with a solemn reverence at a rock so old they could barely read the writing, so odd that it taunted and intrigued them. The letters had been carved meticulously and miraculously into the sacred face of the stone, maybe with bone, maybe with metal.  “According to the scholars, the symbols on the rock slab were GNOMEDAL,” the lady in the purple bonnet said.

She smiled and sat down among the wildflowers that crept out from the ravine on Poteau Mountain. “One said it was a man’s name,” she said. “G. Nomedal.”

It was a reasonable assumption.

Other wise and learned translations, according to the lady in the purple bonnet, had been: “Give Attention to This,” or “Sun Dial Valley, ” or “Monument Valley,” or “Boundary Valley,” or “Earth Spirit’s Dale.”

“They were all certain of one thing,” the lady said.

Someone was. Once upon a time. The scholars were sure of it. but they walked back out of the mountain at sundown both confused and confounded by the secret that lay embedded in thick underbrush on the steep slopes of Poteau Mountain.

GNOMEDAL, no matter how old or how odd, just shouldn’t be that difficult to decipher. The scholars whined and wailed, wringing their hands and gnashing their teeth, silently cursing the gray-freckled rock that defied them, standing mute and insolent on land known only by reptiles and varmints, and the reptiles and varmints had nothing to say either.

Alf Monge laughed at them all. Alf Monge was a U.S. Army cryptographer and code breaker, and he said that upon the western face of the great rock slab, carved amidst the lichen on Savannah sandstone, were eight Norse runes, strange letters of a strange alphabet that dated back almost seventeen hundred years.

“What’s more,” said the lady in the purple bonnet, “Alf Monge said he understood the runes. He had been born in Norway, and his hobby was studying Medieval Norse Ecclesiastical Calendars. As far as he was concerned, the symbols weren’t particularly baffling at all. They were simply a date – November 11, 1012 A.D.”

The inscription, Alf Monge said, was in the form of a crypto-puzzle, the kind developed by Benedictine Monks and used by intellectuals around the year 1000 A.D. to hide their messages from the prying eyes of the masses, who had no business trying to read other people’s stones in the first place.

Others doubted Alf Monge. Most eyed the gray-freckled stone with skepticism. Alf Monge, they whispered among themselves, was as crazy as everybody else. What was a runestone anyway, and what in the Good Lord’s name was it doing in the high country of Oklahoma? Besides, why would any runestone be dated 1012 A.D., which was at least four centuries before Columbus and his motley crew ever reached the outer shores of the New World, which was nowhere near Indian Territory or Poteau Mountain?

Yet, a closer examination of Norse history revealed that Thorfinn Karlselfni led four Viking ships to the eastern shores of the United States to set up a colony in 1008 A. D. He failed. On the way home, one ship reached Greenland, one was driven off course and drifted to Ireland, and one sank. No trace was ever uncovered of the last ship.

“A lot of people believe that the vessel left to explore southern waters,” said the lady in the purple bonnet. “It supposedly sailed around Florida and into the Gulf, came up the Mississippi River, then the Arkansas River, and finally the Poteau River. If those calculations are correct, and who’s to say they aren’t, such a route would have put the Vikings within a mile of where the runestone is standing.” On board had been a Benedictine monk. On Poteau Mountain, he could easily have celebrated November 11 and considered the date important enough to be written in code upon the gray-freckled face of Savannah sandstone.

Alf Monge was roundly criticized and ridiculed by the scholars whose loose translations of GNOMEDAL were just as cryptic, maybe more so. But, at least, they did not have the audacity to talk out loud and in public about Vikings roaming the far country of a land-locked piece of America when, as everyone knew, a Viking’s heart and soul belonged to the sea.

The gray-freckled rock on Poteau Mountain is protected behind Plexiglas in the wooden shelter of Heavener Runestone State Park. The carving is clear, even after all these years. The mystery remains. Did the Vikings really come to the Oklahoma high country and lose their way? Why didn’t they leave? What could have kept them there so far from the sea, so far from home? No one really knows for sure.

The lady in the purple bonnet is quick to say:  “Many skeptics go up the mountain, but none come down.”

“So you believe the Vikings were here?” I said.

“I believe in the runestone.”

“Why did they stay?”

“They followed the river.” She smiled sadly. “During the rainy season, the river can be as wide as a lake,” she said, then shrugged, her eyes gazing back to a far time when all the world was a puzzle. “But when the skies dried up, the river dried up, and, perhaps, their ship ran aground, they were trapped. There was no way out of here. It was as if the sea itself had abandoned then forsaken them.”

“What happened to the ship?”

“It was probably dismantled and the materials used for housing.”

“What happened to the houses?”

“The land is filled with the ruins, the ashes, the dust, the splinters of homes that, like man’s own footprints, have vanished with the years.”  She laughed lightly. “You have to remember that the Vikings came, if they came, a long time ago. Not much ever lasts for a thousand years.”

“Only memories,” I said.

“Especially if they are written on the stone,” she said.

“It’s not much of a diary,” I told her. “A single date. A holy day, if Alf was right. No message. No words of wisdom. No explanation. No signature.”

“I don’t see a message when I look at the stone,” the lady in the purple bonnet said as she stood to make her way back down the mountain again. “I simply read the sadness etched into the letters. For someone, lonely, adrift and without hope of ever seeing home again, it may have been the beginning of the end.”

It took a thousand years before the stone could be read, even longer before the meaning will be believed, if, perhaps, it’s ever believed, six hand-carved letters separating truth from myth, and one is just as puzzling, as uncertain, as the other.

The carving is either old, very old, or the last ancient testament of a monk who sailed with the Vikings into the high country around Poteau Mountain and could never find his way out again. The passing years have preserved the mystery but never solved it.

Please click HERE to find stories about places I’ve been and people I’ve met in Confessions from the Road. 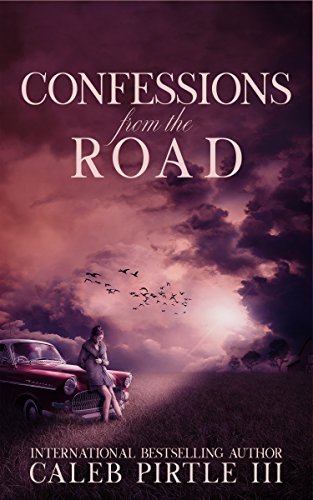