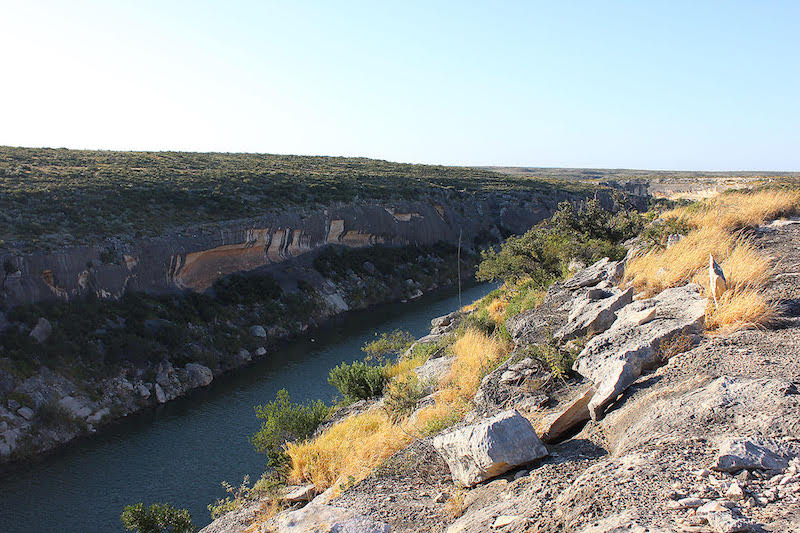 Predawn in the desert. The mid-autumn temperature was chill, the wind calm. The dark sky’s billions of stars cast an eerie glow on my white, ’08 Harley Ultra. The only sound breaking the arid silence was the hiss of my propane stove heating water for coffee. I had the world to myself. This was beyond glorious, beyond magnificent.

At a quarter to eight, as the sky turned light gray and false dawn yielded to day, silence still reigned. Strapping a military-surplus webbed belt with two attached canteens about my waist and shouldering a small day-pack, I set out for Seminole Canyon State Park’s “challenging” seven-and-a-half-mile Canyon Rim Trail. I love solitude and this was solitude at its best.

The desert can be unforgiving—especially to those alone.

A blazing sunrise. Walking along the paved campground access road, I mounted a small hill. Ahead, the desert. I was energized.

Picking up the trailhead and setting off at a brisk pace, I was pleased to see the path was well marked. Every quarter mile, distance signs told me where I was. Intersections too were obvious. About a half-mile into the hike, I bore left to follow Canyon Rim Trail. It looked well-traveled—but not this morning. I paused and broke out in a big grin. This was fabulous. No people, desert silence, a rugged landscape of prickly pear, ocotillo, scrub, broken rock, and hard-packed sand. The crystal-clear air smelled empty and dry.

The trail turned east and bore directly toward the sun. Many dawns and dusks have found me riding into a rising or setting sun, squinting desperately to see the road ahead. I’ve never experienced the same problem while afoot. Until today. I shielded my eyes against the glare to keep the trail. This was not a place to get lost.

Built in the 1880s for wagons hauling goods, much of the trail I initially followed was wide and level. Approaching Seminole Canyon that changed and the path narrowed. I soon came upon a wooden footbridge. To my right were two rock rings, part of temporary, tepee-like structures dating back five hundred to one thousand years. To the left, I got my first eyeful of Seminole Canyon. Even dry, it was mind-boggling. I couldn’t imagine the torrents of water required to carve that deep riverbed.

This was incredible. Every time I turned, every time I cleared a hill or rounded a bend, a fresh panorama exploded before me.

A half-hour into the hike, the trail turned south following the canyon’s west rim toward the Rio Grande River. I paused to remove my sweatshirt and take a well-deserved water break. Lukewarm, it still tasted great.

Warnings. Before setting out, I’d wondered if my footwear would survive the hike. Both shoe’s soles were cracked but so far they’d kept all out but fine, invasive dust. Until now. Two miles in, I felt a stone in my right shoe—a quarter-inch pebble had worked its way in.

Crouching to remove the shoe, my right knee erupted. I straightened it and eased myself to the ground. That was better, but not completely pain-free. A couple of weeks ago, I’d injured the knee, but it had seemed better. This was a heck of a place to learn otherwise. I’d have to be careful.

Continuing south, my knee throbbed, but it wasn’t overly painful, more like a dull ache. Most of the time, I didn’t think about it, distracted as I was by the wondrous landscape as the trail twisted away from the now-water-filled canyon following feeder gulches and gullies, then returned to its rim.

My knee wasn’t the morning’s only challenge, the only problem to overcome.

It happened three times—I lost the trail. Hiking what looked to be a well-trod path, the trail faded. On each occasion a short backtrack yielded an almost indistinct line of rocks angling across the route I had followed, guiding travelers in the correct direction. All told, I lost less than five minutes to wrong turns. Those were five nerve-racking minutes.

Pain stabbed the inside edge of my right knee and I just caught myself before dropping to the ground. Leaning on my left leg, I paused a few moments until the agony eased. Setting out again, I was brought up short within a few steps. Approaching the Panther Cave overlook and the Rio Grande, I suffered another attack. I was almost four miles into the hike. That’s right—at the halfway point. Help, if needed, was far away. Breaking out my rarely-carried cell phone, I lit it off to check signal strength. Nothing.

Four miles is a one-hour brisk walk. I had no idea how long it would take crawling. I found if I pointed my feet pigeon-toed, the pain was endurable.

I massaged my right knee.

A long hike home. Compared to the first five breathtaking miles, the last two and a half were unremarkable. Though spiced with occasional blues and yellows of small wildflowers or a burst of red from a flowering prickly pear, the land was flat, sandy, weatherbeaten, and blasé. To be fair, my knee hurt so bad I might have missed a lot, but I don’t think so.

Painfully plodding on, I mentally cheered as each distance-to-go marker passed by. A mile out, I caught sight of the campground. A half-mile out, I rejoiced the marathon was almost over. Finally, at long last, I spotted the trailhead and just like that, I was back.

When learning how much I like to ride, some people—non-motorcyclists all—feel compelled to warn me of the dangers. My standard response is something like, “Been riding for fifty years—ain’t dead yet.” What would they have me do—walk? Seems to me, that can be dangerous, too—ouch. 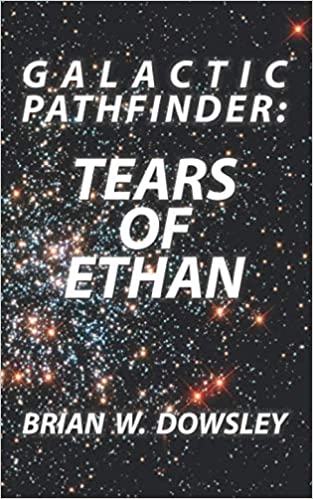