Perhaps she was a follower of a known Satanist, often referred to as The Beast, or perhaps she met her end through Satanic Rites. The Mystery remains.

This is the message that was engraved on a tombstone in Salt Lake City, Utah.  Many have traipsed through Salt Lake City Cemetery to see the headstone of Lilly E. Gray, including busloads of paranormal investigation groups.

Why would anyone put such a thing on her gravestone?  How did she die?  Did she seem possessed? Perhaps that is a reason that someone would feel compelled to make an announcement of this sort on a tombstone.

The gravesite for this woman has always been carefully tended and the burial was planned in advance by Lilly, herself, or her family members.  What is the eerie meaning of the words of the epitaph?

The epitaph is not the only strange thing on the gravestone.  Research has led to the conclusion that her birth date is not correct at all.  It reads:

Theories about the epitaph have floated around for years:  perhaps she was a follower of Aleister Crowley, a known Satanist, often referred to as The Beast.  Perhaps she met her end through Satanic Rites that she had either accidentally or on purpose gotten herself involved in.  Perhaps another person in her circle of acquaintances had beast-like qualities and a history of being abusive toward Lilly, possibly even killing her.

The facts of Lilly’s life have been researched to try to make sense of it all.  She died of natural causes in a hospital room, believe it or not.

She was born in Canada on June 4, 1880, in Ontario, Canada.  It is somewhat of a shock to learn that Lilly had a twin sister, Ethel, and they were the youngest of seven children—until a final eighth child was born.  Shortly after the birth of the twins, the family moved to Michigan.

Ethel was placed in an asylum–Traverse City State Hospital-– in 1898 and stayed there until her death in 1917.  She was only 36.  Not much information has ever been gathered about the reasons behind her admission and how it affected Lilly.

Lilly was married at age 38 to a 67-year-old man, Richard Walsh of Chicago.

The marriage was a short one, as he did not live long.  As a fairly new widow,  Lilly married again, this time to Frank Zimmerman.  She was 46 and he was 50.  They were both able to be employed by a Chicago post office.  Seventeen years into the marriage, Frank died in 1943.

In 1950, something possessed Lilly to move to Salt Lake City, Utah.  Fate seemed to bring her together then, with Elmer Gray.  Complicating research is the fact that they were both born with the same surname, Gray.  They were not related.

As far as Elmer goes, he was a habitual law-breaker.  He was born in 1881 and first did time in a detention center for youth in Nebraska.  He entered the Missouri State Penitentiary in 1909 for grand larceny.

Elmer’s WWI registration indicated that he filled in many of the blanks less than truthfully, including listing his surname as DeGray and saying his birthplace was in France.  His signature cannot be denied – his handwriting is very recognizable.  Elmer often seemed to be itinerant, such as a hobo, or a railroad worker.  He sometimes used the alias, Woodrow Lamb.

Elmer was a strange character who often wove tales for authorities about being robbed, himself, by mysterious interlopers.  His tales seem to paint him as a victim who was caught in innocent but compromising-looking circumstances.  He always tried to minimize his own guilt and always started applying frequently for parole at the earliest opportunity.

In one of his scenarios, he was robbed at gunpoint, and his wife was murdered.  As far as we know his wife was imaginary.  He often told tales of being kidnapped by bad people and forced to do whatever crime he was caught doing.

Somehow, Elmer met Lilly Zimmerman, and they were married in July of 1952.  He was 71 and she was 72.  Elmer seemed to stay out of trouble from that point on, and he and Lilly had an uneventful life for six years until she died of kidney failure and a pulmonary embolism in November of 1958 in Salt Lake City General Hospital.

At different times in her life, she called herself or listed herself as Lillian, Lily, Lilly, or Lillie.

Elmer had a stroke in 1964 and arrived DOA at the hospital.  He was 83.  He was not buried close to Lilly, but his grave is in the same cemetery.

According to some accounts, it had to be Elmer who had the headstone with the puzzling epitaph placed on Lilly’s grave.  We don’t know for sure.

Who was the beast that victimized Lilly, and why?  Will anyone ever know?

Sara Marie Hogg is the author of Gris Gris, a mystery thriller about murder and Voodoo in New Orleans. Please click HERE to find the book on Amazon. 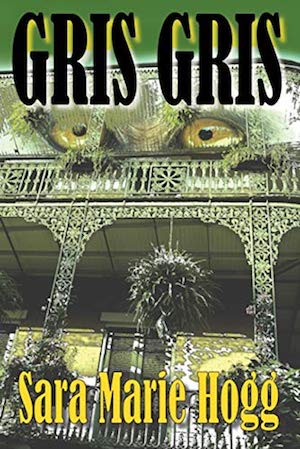 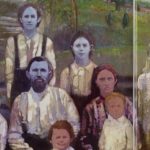 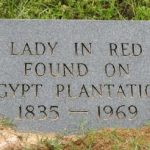