The paintings were done in the time of hunter gatherers in that region and are several centuries old.  They were created on the rock wall of a cave.

I once wrote about fearful characters called Melonheads.  They were supposedly humanlike creatures with giant heads.  Legend was they were the result of experiments done by the government.

These huge-headed “experimental results” were relocated to an area deep within the forests of Ohio to live out their lives in a secret commune.

Occasionally an errant and curious Melonhead would venture out of his area and terrify ordinary citizens in his path.

When I recently saw the ancient image of a big-headed person while browsing online, it was hard for me to not think once again of the bizarre Melonhead legends of Ohio.

The recent image I saw was a pictograph discovered in Tanzania in 2018.  The artwork on a rocky surface has archaeologists baffled.

There are humanlike figures pictured with animals:  giraffes, wildebeasts, elands and buffalo.

The ancient animal figures are easily identified.  Care was taken to draw them accurately.  They can be recognized.  What is alongside the animals is bizarre.  There are humanoid figures with tall, sticklike, bodies, and gigantic bulbous heads.  Was care taken to draw these accurately, also?  What or who are they?

They seem to be hunting the animals or interacting with them in other ways.  There are smaller humanoid figures in the pictographs that are in proportion and better developed.

The paintings were done in the time of hunter gatherers in that region and are several centuries old.  They were created on the rock wall of a cave, with red and white pigments.

The cave is one of the rock shelters in the Swaga Swaga Game Reserve and it is known as Amak’hee 4.

The Sandawe people, descendents of the cave artists, still live in the area and have no knowledge of what these three big heads are, or represent.  There is no oral history about it.

As startling as the three big heads are, there are other artworks depicting three similar figures. The three figures seem to have some significance.

In fact in all three pictographs, there is a line connecting the mid-sections, but the line is faint in the vertical examples.

There can be no doubt that in the ancient culture, this group of three characters has strong significance–but what is it?

Since Erich von Daniken wrote Chariots of the Gods, 1968, our minds have been boggled by what ancient artworks are depicting.  Ancient astronauts? Aliens? Hybrid creatures? Extinct anomalies?

What are these people with big heads? 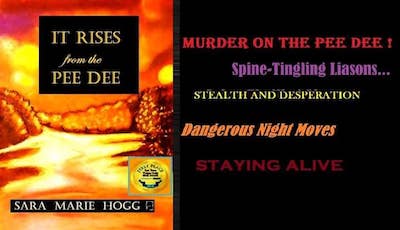