Where are the strange implants Dr. Roger Leir removed from those who claimed they were abducted by extraterrestrials?

In March of 2014, a man left this earth.  He may have taken with him some astounding information.  He may have left a stash of tiny, but mind-blowing artifacts behind, hidden somewhere.

Roger Leir was born in 1935 in the Bay Area.  His family moved to Southern California where Roger was able to eventually receive a Bachelor of Science degree at UCLA in 1961.  In 1964 he received his doctorate in podiatric surgery.  He started his career as a foot surgeon where he had more than one patient who came to him for relief from curious problems of the lower extremities.  They seemed to have a memory of being abducted by extraterrestrials and these extraterrestrials had placed metallic implants beneath their skin.

Dr. Roger Leir scoffed to himself when he heard their confessions, but did his best to be understanding and humor them.  He would try to remove them.  He began to question himself when he saw the objects on X-rays. He got out his scalpel and went to work.

All of the removed objects were similar.  They were made of the same minerals as are found in meteors.  He had samples analyzed by The New Mexico Institute of Mining and Technology.

He became so entranced and puzzled by the tiny artifacts that he joined a local chapter of MUFON.  Since the analysis of the metal indicated that they were the same minerals found in meteors, Dr. Leir was certain that they actually were extraterrestrial in origin.  Some of them seemed to be highly magnetized and seemed to actually repel his surgical instruments during extraction. 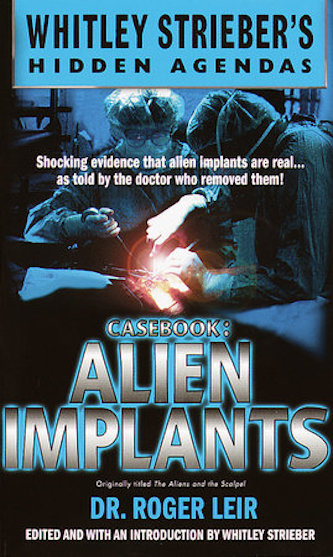 After consulting with scientists, he was also convinced that they were emitting Deep Space Radio Waves.  They possibly also received radio waves.  He was convinced that this was proof of alien interference with humans.

He found himself becoming consumed by the study of the metallic implants and was sent more patients to his practice by word of mouth.  He started to write books on the subject and was a popular speaker at meetings and conventions on related subject matter.  He made a circuit of radio and television talk shows.  The subject became so important to him that he hired a dentist and a radiologist to help him in his medical practice.

In 2003, Leir was drawn to Brazil to examine a UFO crash site.  Whatever he had seen regarding the tiny implants and their properties convinced him that we are not alone.  He wrote a book about his experiences in Brazil.

Aside from this quirkiness, Dr. Roger Leir had an impressive resume.  He had done research for Dow-Corning for their own surgical implant divisions.  He traveled to a total of 42 countries talking and studying about the subject matter of surgical implants including the tiny alien implants.

He did a total of sixteen surgeries, removing seventeen implants.  They were 6-10 millimeters in length—about the size of pencil lead.  Sixty percent of them emitted unusual light waves to boot.  Radio frequencies in the MM band were detected.  The surgeries were documented with eyewitnesses.

The tiny implants caused no inflammation and caused no rejection reaction.  He sent samples to many labs for analysis.  Implant # 17 was made up of 36 elements.

Shortly before his death of a sudden heart attack,  Dr. Roger Leir had written a detailed paper about the tiny implants:  The Smoking Gun.  He considered it to be the most detailed and best paper he had ever written.  He got to see the article published just a few days before he died.

Question:  where are the implants now?  Where is his documentation?  His associates will not talk on the subject.  Did any of the labs keep any of the material they tested?  Are there any recorded testimonies of the patients that had implants removed by Dr. Leir?

Sara Marie Hogg is the author of Gris Gris, a voodoo mystery in the mysterious streets of New Orleans. Please click HERE to find the book on Amazon.