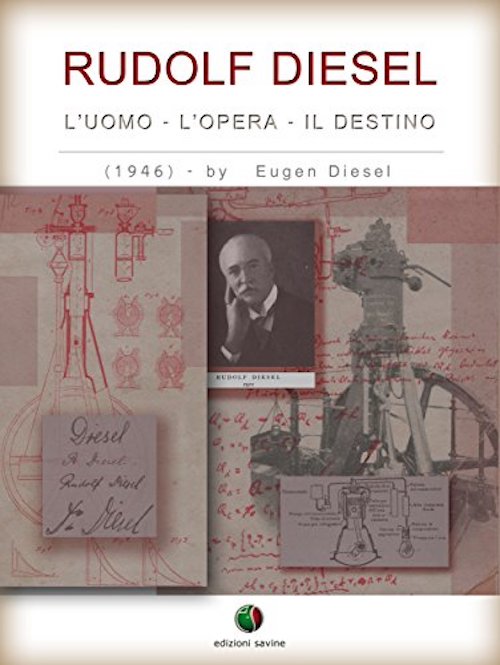 Was it suicide, or was it possible that he was killed by Germans who did not want him passing on his engine designs and inventions to the British?

Rudolf Diesel was born in 1858 in Paris, France.  His final resting place is strangely noted:  The North Sea—the English Channel to be more specific—in 1913.  He was 55 years old.

If the name sounds familiar it is because it was Rudolf Diesel who invented the Diesel engine.  His Bavarian immigrant family had moved to Paris.  The move may have been beneficial in many ways, but life was still a struggle for the family.  Young Rudolf was farmed out to another family at least once, and when he returned he had to work long hours for his father in his leather workshop, then he had to deliver goods with a barrow.

Rudolf was able to attend a French Protestant school where he excelled at academics and received honors.

Because of the Franco-Prussian War, the family moved to London.  Then, Rudolph was sent to school in Augsburg, where he lived with his aunt and uncle.  His mother hoped he would absorb some of his German roots there.  He continued to do well in school and was able to get a scholarship to Royal Polytechnic of Munich.

He continued his studies against his parents’ wishes.  They were eager for him to enter the workforce and start earning some real money.  His higher education ran into some snags when he contracted Typhoid Fever.  Yet, he was able to recover and graduate with honors a year later than planned.  He returned to Paris and became his former professor’s assistant.  He helped in the design of refrigeration systems and became director of the plant.  He began applying for patents on some of his designs and they were granted.

At this time he decided to get married and begin a family.  He took his young family back to Berlin where he felt he would have more designing and patenting opportunities.    He branched out from refrigeration to steam and steam engines.  Some of his experiments resulted in explosions that injured him.

He got several patents on new engine designs—this led to his interest in designing a more efficient engine, a rational heat engine. The Diesel Engine was not an easy thing to invent.  The process went through many designs, each one better, and with a new patent.  It took from 1892-1897.  His first successful Diesel engine is on display at the German Technical Museum in Munich.  Diesel engines became a major contribution to the trucking and manufacturing industries.

On December 29, 1913, everything changed.  Rudolf Diesel was a passenger on a ship, the S. S. Dresden.  He was going to London from Antwerp.  He had an evening meal, then went to his cabin at 10:00 p. m.  He had lined up a wake-up call for 6:15 the next morning—but he was not there to wake up.  His bed had not been touched, and his clothes were laid out for the next day.

Where was he?  The seas had been calm, with no rough weather—nothing that would have contributed to his being accidentally flung overboard.  He was not on the ship.  Had he jumped?  Maybe he had been depressed.  There were rumors—and that is all they were, it was learned—of failing health and heavy debts.  Was it too much?

There was the possibility of intrigue.  Was he murdered?  Was it possible that he was killed by Germans who did not want him passing on designs and inventions to the British?

The financial condition of the Diesel family was not certain.  A prominent New York newspaper gave two opposite headlines a few weeks apart:  Diesel Family in Straits—he left the family in extreme need.  Then there was this:  German Inventor was a Millionaire and His Home Was Happy.  Which was it?

A body was later fished out of the sea that was too far gone to identify.  Diesel’s son claimed that some of the effects on the body were Rudolf’s.  Another body was found in the sea at a different location.  It was lost again due to a violent storm before any examinations could be made.

Were either body Rudolph?  It is not definite.

There is another big mystery.  When Diesel departed on the voyage, he left a satchel with his wife.  He told her to open it in a week’s time.  It was filled with 20,000 German marks.  There was also a ledger sheet of the family’s total debts.  To muddy the waters, Diesel had a little diary that he wrote in from time to time.

On the page for the date of his disappearance, he had drawn a small cross.  Maybe he did commit suicide, or maybe he had gotten hints that he might be murdered sometime soon.  He was in fact planning on meeting with representatives of the British Navy to discuss the possibility of powering submarines with Diesel engines.

After all this time, there are still no real answers.

What became of Rudolf Diesel and why?

Sara Marie Hogg is the author of It Rises from the Peedee. Please click HERE to find the book on Amazon.