The military men instructed the people in the group to never mention a word to anyone about what they had seen. There would be consequences.

On that July night in 1947, there were horrific thunderstorms in New Mexico.  Some, a rancher in particular, was watching the spectacular light show that was in the near distance. One of the lights did not seem to belong to the storm.  The rancher was mesmerized by a strange light moving oddly against the pyrotechnical backdrop.  It seemed to crash to earth on the rancher’s property or on ranch property nearby.  I’d better drive out and check on this at first light.  Other witnesses beat him to it, changing his experience.

Barney Barnett of Sonora, New Mexico was a straightforward guy, by all accounts from friends.  He thought he saw a plane crash and drove in that direction.  He got out of his vehicle and walked toward the site.  After stumbling around a bit, he came upon a silver metallic saucer.  It was damaged and appeared to have fallen from the sky.  Four small occupants were spilled out of the craft.  They appeared to have no signs of life.

Maybe Barney Barnett would have run off in a panic, but some other witnesses appeared over the crest of a hill at that very moment.  Having some company removed some of the fear factors and all of the witnesses gawked at what was before them.

The batch of people were anthropologists.  They were working on a nearby archaeological dig when they witnessed what seemed to be an airplane dropping from the air.  They piled in a car and drove in that direction.  It may be possible to imagine the witnesses to this eerie and grim scene, the dumbfounded shock on their faces.

Word has filtered down that before they could do much investigating, the US Army arrived on the scene and corralled the group.  Army crews began loading up the little bodies and the spacecraft and putting them into trucks.  It also leaked out that the military men instructed the people in the group—to never mention a word to anyone about what they had seen.  They implied there would be consequences.

Why had the army shown up at all?  How did they find out about the crash?

Well, we would have to go back to the rancher, Mac Brazel. Mr. Brazel was known by his neighbors to be serious and dependable. He was bothered by what he had seen falling from the sky, so the next morning, he went out to do some checking on his ranch.  He found a debris field, ¾ mile x 300 feet.

It appeared that metallic pieces had rained down in giant drops.  He picked up some of it.  It was thin, like a foil.  It could not be folded,  It had strange properties.  It could not be dented.  It would not burn when he tested it.  Mac Brazel was so confounded that he called up the nearest army post.  That is when the army came to investigate, and to make things worse, they took in Mac Brazel and held him for interrogation.  His neighbors watched in disbelief as he was loaded into an official vehicle.

Major Jesse Marcel was involved in the army’s debris collection.  They picked up all of the debris and carted it off. Marcel was able to take a small amount home to show to his excited family members.   Marcel’s eleven-year-old son was impressed.  In addition to the foil-type metal with super properties, there were some small I-beams in with the debris.  Marcel showed one to his family.  The boy related later, as a grown man, that the little I-beam was etched with a type of hieroglyphics.  There was a purple-ish tint to the symbols.

It seems that someone prematurely ordered a press release that stated a disk-like craft had been found.  This was soon retracted with a major press release that all of the debris found after the mysterious event during a night of storms was a U. S weather balloon.

In truth, all of the actual results of the crash to earth were taken to Wright Field in Ohio.  One or more bodies had first been taken to a government medical base near Fort Worth.  There are conflicting reports about where all of these things that fell to earth are located now.

Octavia Henderson is the wife of a pilot that ferried some of the flight debris to various locations.  He described the bodies to her:  Small bodies, big heads, big, sunken, but slightly slanted eyes.  They were not of this earth.

This is similar to what the MJ-12 Memo stated.  What is the MJ-12 memo?  If you are like me, you want to know.  MJ-12 stands for The Majestic Twelve, and it is alleged to be the name of a top-secret group made up of scientific geniuses (and appointed by President Harry Truman) to facilitate the recovery of and investigate alien spacecraft.  Whether or not this committee really existed is still open for debate, but there is plenty of information about it, and a list of the actual members if you wish to delve into it.

What did Barney Barnett and the handful of alleged eyewitnesses see?  They all saw the same thing:  Four tiny bodies, absent of apparent life,   The bodies had large heads, large, deep-sunken, slanted eyes, facial features that amounted to slits, long arms with four digits, and their outer clothing was made of a fabric not seen in human wardrobes.

In fact, a young man who worked in a mortuary had been contacted about purchasing four child-sized, hermetically-sealed coffins.  When he made a sales call to the army officials who inquired, they an actual about face and sent him packing.  They warned him not to talk to anyone. It is hard to actually locate the witnesses that were sworn to secrecy so long ago.  Some of them made confessions to family members on their death beds.

If you wish to see a re-enactment of what the witnesses saw you can find one on Unsolved Mysteries with Dennis Farina as the host.  It is Season 3, Episode 3 of the shows he hosted.  Seek and ye shall find.  After the mysterious Roswell incident, everyone knows that the truth may be out there.

Sara Marie Hogg is the author of Gris Gris. Please click HERE to find the book on Amazon. 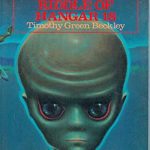 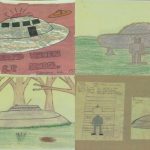