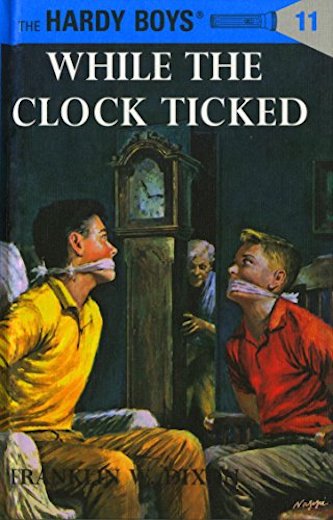 I grew up reading the Hardy Boys. They were always in danger. And they lived entangled within an atmosphere of mystery and intrigue.

I no longer wanted to be me.

I wanted to be Franklin W. Dixon.

He wrote the Hardy Boys series.

The names of his book stick with me still.

The Secret of the Old Mill.

The House on the Cliff.

While the Clock Ticked.

And I’m just getting warmed up.

Franklin W. Dixon was, I reasoned, the greatest writer of them all.

When we drove into Kilgore for whatever reason, my mother dropped me off on a downtown street corner, and I walked straight to Martin’s Bookstore.

I knew where the Hardy Boys resided, and there was a whole bookshelf filled with the novels.

I spent a lot of days and a lot of hours with Frank and Joe Hardy, a couple of amateur sleuths, and their father, an internationally famous detective. Time and again the boys stumbled on incidents and clues that had them bringing villains, murderers, thieves, kidnappers, and all-around bad guys to justice.

They were the best.

The Hardy Boys were always in danger.

They never lost their nerve.

And they lived entangled within an atmosphere of mystery and intrigue.

Franklin W. Dixon was a genius.

He was a master storyteller.

He was my idol.

It was written: “Never were so many assorted felonies committed in a simple American small town. “ The Hardy Boys confronted murder, drug peddling, race horse kidnapping, diamond smuggling, medical malpractice, big-time auto theft, the hijacking of strategic materials, and, of course, espionage – even during the 1040s – and they always got their man.

The Hardy Boys changed over the years as society changed.

How could he do it?

How could one man churn out so many words?

I found out the truth later.

I had been fooled.

Somebody had lied to me.

There was no Franklin W. Dixon.

He was the figment of one man’s imagination.

Edward Stratemeyer had been the founder of a book-packaging firm, and the books were actually conceived in 1926 and written by a stable of ghostwriters, although Canadian Leslie McFarlane did write the first ones.

McFarlane said, “It seemed to me the Hardy Boys deserved something better than the slapdash treatment Dave Fearless had been getting. I opted for quality.”

The critics blamed the author because, they said, the books reflected McFarlane’s “lack of sympathy with the American power structure.” McFarlane defended himself by saying, “I had my own thoughts about teaching youngsters that disobedience to authority is somehow stupid … Would civilization crumble if kids got the notion that the people who ran the world were sometimes stupid, occasionally wrong, and even corrupt?”

Maybe that’s why I liked the Hardy Boys so much.

They were rebels long before I knew what a rebel was or became one.

In later years, long after I quit reading them, the Hardy Boys lost some of their grit. It was written: “The books became more respectful of law and authority. Even villains no longer smoked or drank, and scenes involving guns and shoot-outs were compressed or eliminated in favor of criminals simply giving themselves up.”

McFarlane was devastated. The books have been gutted, he said.

Franklin W. Dixon was just as disappointed, and he didn’t even exist.

Edward Stratemeyer originally wanted to produce a series built around a couple of crime-solving detectives called the Keene Boys.

So the amateur sleuths became the Hardy Boys instead.

Stratemeyer, however, was still obsessed with the name Keene.

So he created the pseudonym of Carolyn Keene and had ghostwriters produce another successful series featuring a girl detective.

He called her Nancy Drew.