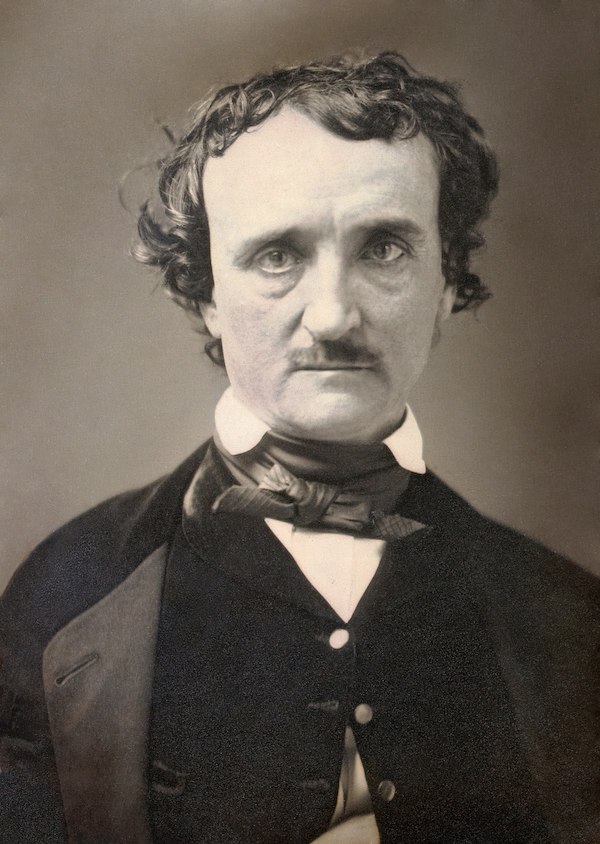 Delighting in the wild and visionary, his mind penetrates the inmost recesses of the human soul, creating magnificent dreams, eloquent, fancies, and terrible mysteries.

But his was a painful and miserable life. It is easy to determine why his mind became a web tangled with death and loss and abandonment. When he was a young boy, his mother died, his father ran off and left the family, and he was taken into the home of a couple who never formally adopted him. He had only one semester at the University of Virginia, and then he was back on the streets. No money. No tuition. No formal education. Poe failed miserably as an officer’s cadet at West Point, and his first published book of poetry did not even mention his name. It was anonymous, written only, the title page said, by “A Bostonian.”

He married his thirteen-year-old cousin, but she was dead of tuberculosis within a decade, dying shortly after Poe published his acclaimed poem, The Raven. Within two years, in 1849, Poe would be gone as well. He was found, either on the streets of Baltimore or in a tavern, either suffering from cholera, drugs, heart disease, rabies, tuberculosis, acute alcoholism, an overdose of opium, epilepsy, or maybe even brain lesions. No one has ever known for sure. He was forty years old.

His death remains as mysterious as his stories: The Fall of the House of Usher, The Pit and the Pendulum, The Murders of the Rue Morgue, The Tell-Tale Heart, The Masque of the Red Death, and The Cask of Amontillado. Only one thing is certain. He was not wearing his own suit of black wool when he was found dying.

He was found dressed, the report said, in “a stained, faded, old bombazine coat, pantaloons of a similar character, a pair of worn-out shoes run down at the heels, and an old straw hat.” Some believe he was robbed, beaten, and left insensible in the street. Some say he was hauled into the tavern on Election Day, given bottle after bottle of whiskey to drink along with others kept imprisoned in a backroom, then paraded outside in different clothing each time to vote again and again and again until he collapsed.

Only Poe knew, and he never had an opportunity to say. His final words were: “Lord, help my poor soul.”

The life and works of Edgar Allan Poe were best summed up by those who knew him or who were influenced and inspired by his writings:

George Lippard in the Citizen Journal (1843): “Poe was born a poet, his mind is stamped with the impress of genius. He is, perhaps, the most original writer that ever existed in America. Delighting in the wild and visionary, his mind penetrates the inmost recesses of the human soul, creating vast and magnificent dreams, eloquent, fancies, and terrible mysteries.”

Jules Verne: “You might call him (Poe) ‘The Leader of the Cult of the unusual.’”

Walt Whitman: In a dream I once had, I saw a vessel on the sea, at midnight, in a storm. It was no great full-rigg’d ship, nor majestic steamer, steering firmly through the gale, but seem’d one of those superb little schooner yachts … now flying uncontroll’d with torn sails and broken spars through the wild sleet and winds and waves of the night. On the deck was a slender, slight, beautiful figure, a dim man, apparently enjoying all the terror, the murk, and the dislocation of which he was the centre and the victim. That figure of my lurid dream might stand for Edgar Poe, his spirit, his fortunes, and his poems – themselves all lurid dreams.”

George Bernard Shaw: Poe constantly and inevitably produced magic where his greatest contemporaries produced only beauty … Above all, Poe is great because he is independent of cheap attraction, independent of six, of patriotism, of fighting, of sentimentality, snobbery, gluttony, and all the rest of the vulgar stock-in-trade of his profession.”

Arthur Conan Doyle: “Where was the detective story until Poe breathed the breath of life into it?”

Alfred Hitchcock: “It’s because I liked Edgar Allan Poe’s stories so much that I began to make suspense films.”