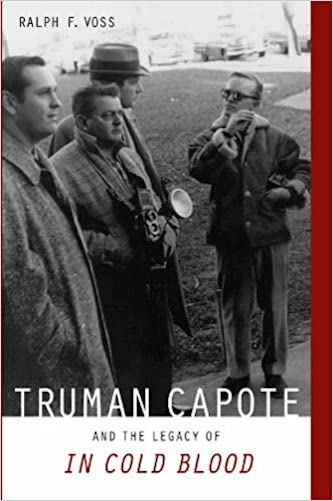 In Cold Blood became an international bestseller, earned more than six million dollars, and forever changed the face of the American novel.

He was a small man, only five feet and three inches tall, but he once said of himself, “I’m about as tall as a shotgun, and just as noisy.” And so he was. He was born in New Orleans as Truman Streckfus Persons, but the byline we all remember carries the name: Truman Capote. He was abandoned by his mother, who would one day kill herself, farmed out to family in the little Alabama town of Monroeville, and grew up in the midst of a lonely and a solitary existence.

He once told The Paris Review that he felt like “a spiritual orphan, like a turtle on its back.” He said, “I was so different from everyone, so much more intelligent and sensitive and perceptive. I was having fifty perceptions a minute to everyone else’s five. I always felt that nobody was going to understand me, going to understand what I felt about things. I guess that’s why I started writing. At least on paper, I could put down what I thought.”

Truman Capote was more intelligent and sensitive and perceptive than anyone else.  And his writing – his prose and his style – contained the stuff of sheer genius. As The New York Times reported, his writing “shimmered with clarity and quality.”

Capote began his career with The New Yorker, mostly sorting through cartoons. But in his spare time, Capote started submitting articles to magazines and, never to his surprise, they were being published. He won an O’Henry Award, which earned him a fifteen hundred dollar advance from Random House to produce a novel. With Other Voices, Other Rooms, then Breakfast at Tiffany’s, he became a star. He became a celebrity. He ran with stars and celebrities.

What troubled Capote most, however, was his longing to create a new kind of novel, a nonfiction novel. He said, “I got this idea of doing a really serious big work. It would be precisely like a novel, with a single difference: Every word of it would be true from beginning to end.”

He tried a couple of ideas and spent a lot of time on research. But one idea after another fizzled out. Then came the turning point in his life. He said, “I wanted to make an experiment in journalistic writing, and I was looking for a subject that would have sufficient proportions. I’d already done a great deal of narrative journalistic writing in this experimental vein in the 1950s for The New Yorker.

“One day I was gleaning The New York Times, and way on the back page, I saw this very small item. And it just said ‘Kansas Farmer Slain. Family of Four Is Slain in Kansas.’ I think it was that I knew nothing about Kansas or that part of the country or anything. And I thought, ‘Well, that will be a fresh perspective for me.’ And so maybe this is the subject I’ve been looking for.

“I arrived just two days after the funerals. The whole thing was a complete mystery and was for two and a half months. Nothing happened. I stayed there and kept researching it and researching it and got very friendly with the various authorities and the detectives on the case. But I never knew whether it was going to be interesting or not.” It was not unlike just another idea slowly drying up.

But police did catch the killers. The case was solved. For the next four years, Capote spent much of his time with the condemned and served as a witness to their execution. The book was six years in the making. In Cold Blood became an international bestseller, earned more than six million dollars, and forever changed the face of the American novel, the nonfiction novel.

It was chilling. It was poetic. It probed the psyche of the town that lost a family and the killers who took their lives. A whole new genre burst on the scene. There had been true crime books written before. But nothing like In Cold Blood. His writing caused Norman Mailer to describe Capote as “the most perfect writer of my generation.”

He once said: “I am a completely horizontal author. I can’t think unless I’m lying down, either in bed or stretched on a couch with a cigarette and coffee brandy. I’ve got to be puffing and sipping. As the afternoon wears on, I shift from coffee to mint tea to sherry to martinis. I don’t use a typewriter, not in the beginning. I write my first version in longhand with a pencil. Then I do a complete revision, also in longhand.

“Essentially, I think of myself as a stylist, and stylists can become notoriously obsessed with the placing of a comma, the weight of a semicolon. Obsessions of this sort, and the time I take over them, irritate me beyond endurance. Then I type a third draft on yellow paper, a very special certain kind of yellow paper. I don’t get out of bed to do this. I balance the machine on my knees. It works fine. I can manage a hundred words a minute. When the yellow draft is finished, I put the manuscript away for a while, a week, a month, sometimes longer. When I take it out again, I read it as coldly as possible, then read it aloud to a friend or two, and decide what changes I want to make and whether or not I want to publish it. I’ve thrown away rather a few short stories, an entire novel, and half of another. But if all goes well, I type the final version on white paper, and that’s that.”

Truman Capote died far too young. He was only fifty-nine. He published a mere thirteen books, most of them slender volumes. Even his novels, other than In Cold Blood, read like extended short stories.  An old friend John Malcolm Brinnin said that Capote had failed to join the ranks of the truly great American writers because he squandered his time, talent, and health on the pursuit of celebrity, riches, and pleasure. He did have a feud or two with other well-known authors of the time. Gore Vidal read about his death, nodded, and called it “a good career move.”