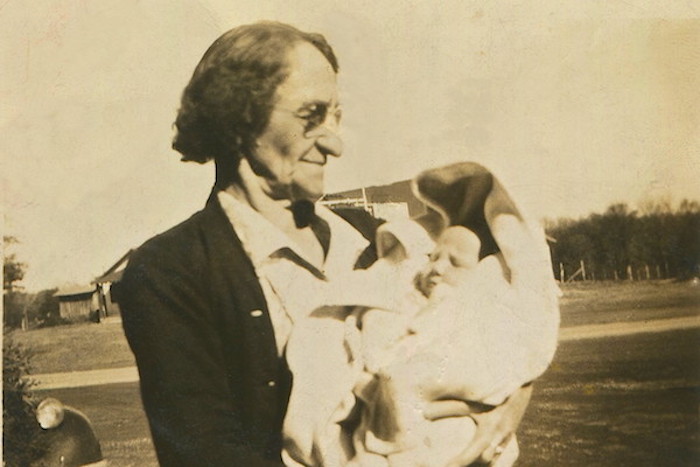 A grandmother’s influence typically is mighty, often reviewed, appreciated, and claimed long after she is gone.

Recent conversations–okay, maybe just banter–have me thinking heavily about grandmothers. Those who’ve had the nurturing of two are doubly blessed. (I knew just one since the flu epidemic in the 1920s took one away several years prior to my birth.)

They constitute a special group, these grandmothers who answer to many names, some of which they’ve chosen to announce to grandchildren. In some cases, we old-timers respond to IDs slapped on us by kids and grands. They’re usually endearing names with special meanings.

A grandmother’s influence typically is mighty, often reviewed and claimed long after she is gone. Memories are made of such, and some of our mind’s keenest recollections may be viewed by others as minutia.

Stuck in my memory is Dora May Newbury, whose quiet expressions of love are remembered mostly from Christmas times. Included is the simple decoration of a small gnarled mesquite limb masquerading as a Christmas tree. Then, on to her kitchen, where she created marvelous fried pies. Their aroma wafted throughout Granny and Pawpaw’s small rock house, the smell alone better than the taste of pies baked by professionals, or so it seemed….

Last week, I had phone visits with educator friends Susan Barkley in Dallas and Dr. Jimmie Nelson in Burleson. Their memories are rich with the perseverance of a grandmother and an aunt, respectively.

She lived a couple of miles from her one-room school in rural Indiana, near Plainville. There, she “did it all.…”

She walked the two miles to school routinely, but during snowstorms, walking was anything but routine.

She had no idea that after the school’s pot-bellied stove was stoked during wintry days, a farmer nearby relaxed, realizing that smoke wafting from the chimney meant she’d made it to school safely.

One day, slippery ice was too much, causing a fall. Her head struck a rock, and there she lay in an unconscious state, the temperature in the teens as the snow fell harder….

When the smoke didn’t appear “on time,” the farmer knew something was wrong. He hurried to the trail she always trod, finding her crumpled in the snow. He carried her to his home, where he and his wife revived her.

Susan’s beloved grandmother lived another 50 plus years, teaching, caring, and nurturing. “She was the most loving person I’ve ever known,” Susan remembers. Her hero, who spent summers in Washington D.C,. visiting a cousin whose dad worked at the Smithsonian Institution, learned much there.

Mostly, though, she learned at her grandmother’s knee, wisdom gleaned from years of experience. Susan remembers crying upon spilling milk that she knew had been laboriously produced. It was then that she was first exposed to one of life’s most-used expressions, “Don’t cry over spilled milk.”…

Dr. Nelson’s aunt was Dorothy Nelson Bull, who lived in Colorado. She, too, taught in a one-room school, living on a ranch outside of Delta.

Distance from her home to school on horseback was but a few miles, but sometimes weather held the upper hand. A stream crossed the trail, and her steed usually could trot effortlessly across.

One morning, though, heavy rains made the stream treacherous. Determined to get to school, Dorothy remained in the saddle as the horse stepped cautiously into the water, then had to begin swimming….

She held doggedly to the saddle horn, and when safely on shore, was 100 percent soaked.

Always early to arrive at school, she hurried inside to light the fire. When students arrived, she yelled, “Stay outside until I open the door.”

Disrobed, she dried her clothes near the stove. When they were “semi-dry,” she put them back on, then welcomed the children inside. Down deep, Dr. Nelson thinks of her as a grandmother posing as an aunt!…

Don Newbury is the author of the inspirational and humorous memoir When The Porch Light’s On. Please click HERE to find the book on Amazon.