Dr. Robert Smith and his wife, Ethelyn, set new standards of service to others, however, the kind that the rest of us may only dream of.

The late Dr. Robert L. Smith and Ethelyn Hughes Smith, his bride, fell short in precious few areas of life, but when they did, it was never by intent. By a few weeks in each case, they missed a 70th wedding anniversary, he failed to attain age 90 and she was just short of her 97th birthday when she died recently.
They set new standards of service to others, however, the kind that the rest of us may only dream of.
When they reached their 60s, the thought of retirement didn’t enter their minds. In fact, they would change gears to serve another three decades of Christian service upon relocation to Brownwood, Texas, where he would become a distinguished professor of preaching at Howard Payne University….

Ethelyn was in lockstep with him, loving students and others as much as he did. The former pastor at First Baptist Church of Houston, he was a recognized artist as well, and when age started to take its toll, he clung doggedly to teaching an adult Sunday school class now led by another HPU retiree, Dr. Paul Butler.
Dr. Butler and wife Virginia marveled at his determination, even when macular degeneration robbed him of his eyesight.
As Dr. Smith completed five years as a Sunday school teacher and with vision almost gone, he depended on Ethelyn holding up big-lettered poster boards for his outline. Dr. Butler described her as “a 100-pound package of dynamite.” And she was….

She was the ultimate in modesty, saying little of playing the piano at age 10, or serving as organist at both the Baptist and Presbyterian churches in Jefferson, Texas, at age 12. Nor was it widely known that she also was both an artist and ceramist.
While cleaning out her closets a while back, children Judy and Robert Jr. – themselves artists – found several drawings with their mother’s name on them.
Neither had ever seen these works, nor heard much of her artistic talent….

Ethelyn sustained a broken back as the result of a fall in the Smith’s yard within months of her husband’s death. Soon, she and Robert Jr. – long physically challenged – were residents at the Redstone Assisted-Living Community.
They were “rock stars” immediately. Robert Jr. cheered other residents as he moved around Redstone on his motorized wheelchair.
During multiple times weekly until recent months, Ethelyn made her way to the lobby to play hymns on the piano for residents….

Steady streams of visitors came to see Ethelyn and Robert Jr. Perhaps most surprising were out-of-state visitors on her 90th birthday. Three couples–all members of the young marrieds Sunday school class Ethelyn taught during the Smiths’ 14-year stint at First Baptist Church in Pompano Beach, Florida–drove to Brownwood for a two-day visit with her. Their trip covered some 2,500 miles.
We’ve all heard of prayer warriors. Ethelyn headed the list.
She prayed with great confidence and expectation, making specific prayer petitions as requests were delivered by class members from a prayer box at First Baptist Church. Little wonder that she soon was called “the prayer lady” by Redstone staffers who visited her regularly for prayers and encouragement….

Finally, this: Determined to serve our Lord in all ways she could, she sent birthday cards–each with personal touches of scriptures and words of encouragement–to everyone at Redstone–some five dozen residents and three dozen employees. She sent about 1,000 cards.
She didn’t have “the last word” at her funeral though, as she requested. (She claimed “last word status” in the obituary she wrote in her program obituary.)
Judy and Robert Jr. would have none of it, though. Several folks had “last words,” including Dr. Butler and me. He cited a great truth: “Robert and Ethelyn Smith taught me to be excited about what to pray for, because chances are very good that it will come to pass. If it doesn’t, it’s because God has something better in mind.”…

Please click HERE to find Don Newbury’s inspirational and humorous Life by the Seat of the Pants on Amazon. 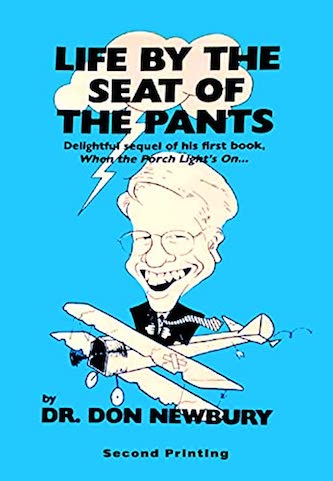