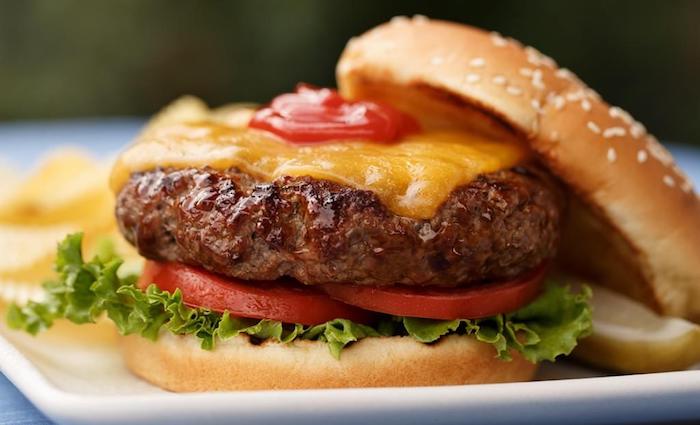 I credit the Popeye cartoon for giving hamburgers a giant push when the long-running comic strip began in 1934.

Historians who tired of seeking origins that mattered much probably risked losing their licenses oh, 1.4 centuries ago. That’s when they scattered like quail in a hailstorm trying to identify the “inventor” of the hamburger.

One of the few points of agreement is that they were introduced during the 1880s, depending on how deeply one wishes to delve. Some contend hamburgers originated in Tulsa, OK. No, screams a Texan, it was in Athens, Texas. Still, another insists that the first real hamburger was hawked at the St. Louis World Fair in 1905.

Still others (probably the loonies who have tried too hard to popularize steak tartare for the masses) say that really rare burgers came of age in the 13th century when Mongolian Hordes ran amuck–or at least “trotted amuck”–pillaging lesser empires.

Foodies reaching that far back are invited to do so. They claim that card-carrying Hordesmen (there’s no record of any Hordeswomen, cardless or otherwise) slapped big chunks of raw beef under their saddles after their loins were girded for battle. As they went about their pillaging, the beef was tenderized–admittedly in a primitive way–and served around campfires at day’s end. (One critic says that even Mongols would have known to cook it first, and maybe they did.)….

Fie on such opinions, I say. Let us agree, though, that hamburgers’ beginnings as late as the 1880s seem sketchy at best. I credit the Popeye cartoon for giving hamburgers a giant push when the long-running comic strip began in 1934. Popeye kept farmers growing spinach, and another got us hooked on hamburgers.

Remember J. Wellington Wimpy, drawn by a portly cartoonist perhaps wishing to create a character more amply “waist-lined” than himself? He was always chowing down on a hamburger, perhaps after three already had been consumed.

Now, I don’t know where to start apologizing. My intent was not to delve into “hamburger history,” but to marvel at the unique ways restaurateurs can call attention to burgers. IHOP got in major licks a year or so ago. They announced taking on a new acronym–IHOB.

Henceforth, ads contended, IHOP would be known as the International House of Burgers.

News media took the bait and ran with it, only to learn a few days later that IHOP was just kidding….

Now, burger lovers wonder about “what gives?” at Sonic Drive-Ins, an Oklahoma-based chain.

The decision has been made to switch their mustard/mayo basic topping to ketchup/mayo, deciding, it would seem, that mustard no longer “cuts the mustard.”

Bud Kennedy, a skillful and prolific writer on the food topic–or any other you’d like to throw at him–announced this recently in his popular “Eats Beat” column in the Fort Worth Star-Telegram.

He questions, as do I: “Is Texas the last outpost for mustard?” (Mustard will still be available at all Sonics as a special order option.)

It may be that the Sonic decision is based on actual orders placed at their drive-ins.

Count me among those who fancy mustard.

Most shocking to me is that hamburgers didn’t have a cheese option until the mid-1920s, when Lionel Sternberger, a Californian, offered a “cheese hamburger.” (Why didn’t he take the “ham” out of the name then?)….

Coming to mind is the mid-sized town that had three “burger joints” on the same street. One was shiny, with a neon sign flashing this brag: “BEST HAMBURGERS IN TEXAS.”

In the next block came a new eatery, claiming: “BEST HAMBURGERS IN THE WORLD.”

Still “farther out” remained a “mom and pop” place that had been there for years. It needed painting, and the building leaned a little, but patrons lined up to order. It had no electric signage. Instead, a chalkboard proclaimed: “BEST HAMBURGERS ON THIS STREET.”…

Don Newbury’s humorous and inspirational memoir, When the Porch Light’s On, is available on Amazon. Please click HERE to learn more about the book.