Like the Rev. William Archibald Spooner, we often found himself in “verbal muddles,” typically transposing words, letters, and ideas.

Last week’s piece about misstatements on the radio–as well as other communication boondoggles–resulted in readers’ contributions of foul-ups they’ve either heard of or experienced.

Revisiting the topic allows me to give due credit to one Rev. William Archibald Spooner, a 19th century English preacher.

He often found himself in “verbal muddles,” typically transposing words, letters, and ideas. That’s where the term “spoonerisms” originated. (We could give chase to the origins of malaprops, I suppose, but I’ll place it in the “maybe later” file.) Can it be? After writing my 976th column next week, I’ll start my 20th year of weekly ramblings….

Anyways, I must provide light of day to an apology scrawled atop a term paper to an English teacher a couple of decades ago.

She swears that the student’s exact quote is remembered, squirreled away in the humor corner of her brain.

The kid was three days in arrears of the due date, scrawling thusly: “I am indeed sorry to be  late with this paper, and hope I haven’t caused you any incontinence.” She didn’t say if the addendum rendered her loss of control….

While on the topic of words, a friend reported seeing a strange sign nailed to a fence post alongside a state highway running through East Texas recently.

I joined him in wonderment. Neither have I ever seen a sign advertising “Slightly Bit Coins.”

Then, it dawned on me that my friend saw it near my old Uncle Mort’s place, down in the thicket. The far-out sign sounded so much like my 108-year-old uncle, I decided to give him a call.….

Mort confirmed that it is indeed his sign and that a few motorists are taking the dirt road down to his place out of pure curiosity. They all wonder about “slightly bit” coins.

Turns out, Mort has proven–yet again–that a little knowledge is a dangerous thing.

He’d read a newspaper account of the growing popularity of bitcoins, and decided to get in the game. “Course I wondered why folks would like bitcoins,” Mort laughed. “But I figured that I could bite with the best of ‘em, particularly after I got wise and attached drill bits to the eye teeth of my dentures.”…

He indicated that he first tried biting coins without removing his teeth, but it was “hard to make impressions deep enough to be noticed.”

That’s when he decided to affix the upper and lower plates to his vice, and now, coin impressions are obvious.

While on the subject of unlikely occurrences, my friend Doug Haynes often recounts unusual experiences as a railroad locomotive engineer. You name it, and he’s likely to have plowed into it, always adding that “once those suckers get up speed, it takes a while to get ‘em stopped.”

One day, a fellow engineer shared that on a recent run, his locomotive hit a kangaroo. This was on a country run in Texas, nowhere near a zoo or Outback restaurant.

All the engineers scratched their heads; none was able to come up with a logical explanation….

Someone recalled that an exotic animal game preserve is located a few miles from the railroad. The group decided that the animal escaped, perhaps roamed for a time, then stopped after innumerable tiring hops for a nap between the rails.

Since no one from the game preserve mentioned a missing kangaroo and no one from the railroad announced hitting one, the evening TV news people had to seek sensational closing stories someplace else….

Please click HERE to find Mostly Mort on Amazon. It is a collection of the wit and wisdom of Don’t mythical uncle living in the Big Thicket of Texas. 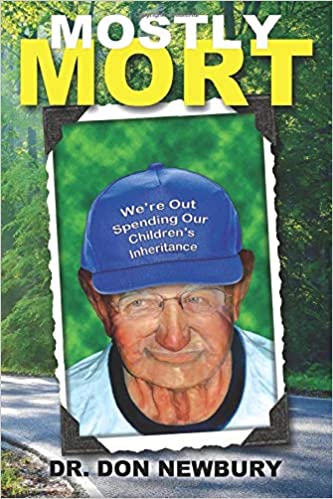