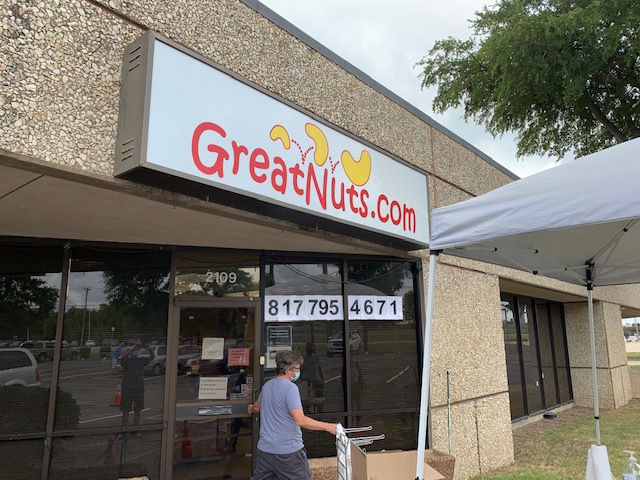 What can a small company do with a storeroom crowded with 87,000 pounds of packaged premium nuts?

It quickly became the perfect storm, powerful enough to make strong men cry. The same goes for strong women, too, but Kim Peacock, president of GNS Foods in Arlington, is giving her all to keep her family-owned specialty premium nut company afloat despite “blows to the bow” that might cause others to jump ship.

Consider this: She started her company with hopes, dreams, and plans in 1990, and until recently, things were going well with roasting the absolute best nuts, then packaging them for sale to other companies, most being airlines that pampered their first-class passengers with first-class nut treats.

The year 2020 has been a nightmare for companies such as hers, what with bumper nut crops that caused tree limbs to break, a sharp increase in nut allergy diagnoses, and the biggest “bugaboo” of all: a virus called COVID-19. The latter has crippled airlines, causing them to remove nuts from flights. She and her husband Don are creative to the max, insisting on an optimistic stance when pessimists contend there’s a tunnel at the end of the light….

With a slowdown of orders and some deliveries refused, the company’s storage space was crowded with 87,000 pounds of packaged premium nuts, plus additions of raw ingredients accounting for another 87,000 pounds. They were originally expected to be delightfully ingested on upcoming flights. Now, selling the cashew-pecan-pistachio-almond blends within the next few weeks is critical.

How critical? They’ve expanded their retail factory store at 2109 East Division in Arlington, offering 1.25# bags for $5.95 each. This is well under the previous wholesale price. Patrons may buy one bag, a thousand bags, or even more. (Shipping, of course, must be added.)

Kim, Don, and 11 employees–including four relatives—don’t want to be left holding the BAGS….

I had never previously heard of GNS, probably because I’ve never flown first class. However, I felt compelled to know more, despite having “zero connection” with anyone there. A visit was arranged.

I was blown away. It was “spic-and-span” by any standard, and employees were busy filling various kinds of orders from throughout the U.S., including fudge and divinity. Christmas items were being prepared, topped with festive hand-tied bows.

I asked about a “whatzis” on the nut-packaging conveyor. It’s a metal detector. Huh? “Occasionally, raisins have buckshot in them,” Don explained.

Huh again! He explained that raisins come from California vineyards, beginning there as grapes. Hunters looking for dove see them disappear into the vineyards, and they “fire away,” often hitting grapes instead of birds.”

Next, I thought of fellow senior adults–PrimeTimers we call them–folks with whom I work at Burleson First Baptist Church. I figured that many of them would become creative about the creative packaging of nut gifts.

My wife’s eyes rolled as eight cases were loaded into our car. (Sometimes, she doesn’t share my incurable optimism.)

The nuts were taken to the church office. Within 72 hours, all 200 packages were gone, so we fetched 16 more cases. A dream would be to make others aware of this bottom-basement price, as well as stir creative uses by groups needing a fund-raiser.

Some of our seniors are working on creative nut packaging, and one purchased 75 packages for her granddaughter’s wedding reception next spring. Others are simply “scarfing them down,” holiday or not….

The phone just rang. Calling was a Howard Payne University graduate, Col./Dr. Murray, assistant scoutmaster for sons Kaid and Ian’s California scout troop. He thinks the nuts might become a great fund-raiser for his scouts.  (Murray, by the way, rode a bicycle from Toronto to Texas, via Vancouver. He’s now a USAF Flight Surgeon credentialed for aerospace medicine. We don’t have a better friend, or any alumnus we admire more.)

Don Newbury’s inspirational and humorous memoir is entitled When The Porch Light’s On. Please click HERE to find the book on Amazon.