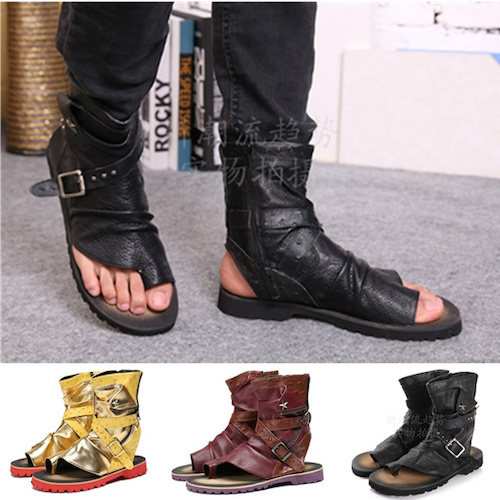 Life with all of its interesting shoe choices goes on, the world changes, and we shift with it, or squirm. The older we get, the more we squirm.

Proverbial truisms typically go unchallenged, but an expression dating back to the sixteenth century has gone by the boards when its application is directed toward men’s footwear.

Historically, what men have worn on their feet has been basic, often dictated by comfort, durability and practicality. Long before Baskin-Robbins came along with 31 flavors that threatened the popularity of vanilla ice cream, women chose to go “hog wild” in the world of shoes, many of which are both uncomfortable and hazardous. Members of the fairer sex scoffed at the thought of being limited to only 31 choices.

But wait–dangers of going headlong in too many directions loom because my intent is to suggest that men, too, are going to extremes in shoes. They are enhancing the probability that even though silk purses can’t be made of sows’ ears, shoes probably can be….

In most instances, the admonition that something inherently ugly cannot be turned into something valuable seems to apply.

With Pandora’s box on men’s shoe design flung wide open, there’s a good chance that sows’ ears–as well as other animal parts and various other materials–now are utilized to turn out popular shoes for members of both sexes.

And there’s a good chance that such shoes may be pricey. If you don’t believe it, take a gander at the social media of your choice (if you so “gander”). There are big advertising pushes for all sorts of men’s footwear, some with wild patterns, designs, colors, and features that leave our Oldsmobile-driving fathers’ heads spinning….

During most if not all of my adult life, men have chosen lace-ups or loafers, brown or black. Boots didn’t change much, nor did what farmers called “brogans,” rugged leather boots that originated about the same time early writings disparaged the worth of sows’ ears.

Folks who agree that men’s shoe choices have expanded greatly may wonder why. Or, why not?

The simplest choice would be to blame it on COVID-19. I’ll not do that; instead, I’m blaming it on professional men’s sports….

I’ll narrow the focus to football and basketball, sports whose games light up television screens regularly.

The National Football and Basketball Leagues have historically dictated what can be worn by participants. (I know. Here lately, rules on “uniform messaging” have been loosened.)

However, if the leagues ever had rules concerning footwear, they have not been enforced. This tells me that companies turning out athletic shoes have strong votes in determining what is acceptable. Since the NBA games are now “in session,” I’ll cite a current example of what I’d call deviation from the norm. I’m citing Dallas Maverick phenom Luka Doncic, whose tennis shoes (growing up, we called ‘em “tenny” shoes) are often of a rich rose hue….

Others favor similarly gaudy colors. Pro athletes are flexing both muscles and influence. Surely, team owners are scratching their heads, wondering what apparel deviations are next to be requested by a bunch of spoiled superstars.

‘Tis a puzzlement, of course.

Life goes on, the world changes and we shift with it, or squirm. The older we get, the more we squirm….

For the smattering of us who grew up listening to kids’ radio programming, we painted mind pictures of voices and sounds emitting from that remarkable entertainment device.

In a much less impactful way, our radio heroes affected choices made by children and/or their parents.

We were urged to consider limited choices of cereal, often to claim the “magic decoder ring” or some other item contained in the boxes. Sometimes we completed coupons printed thereon…..

Come to think of it, even those shows concentrating on Saturday morning kids’ audiences may have provided the first advertising push I recall for children’s footwear.

Sponsors included “Buster Brown Shoes,” and the short appeal included an appeal from Buster Brown himself. Here’s the way it went: “My name’s Buster Brown. I live in a shoe. (Insert dog bark) That’s my dog, Tige. He lives in there, too.”

Life was simpler then….

Don Newbury has written a humorous and inspirational memoir When The Porch Light’s On. Please click HERE to find the book on Amazon.