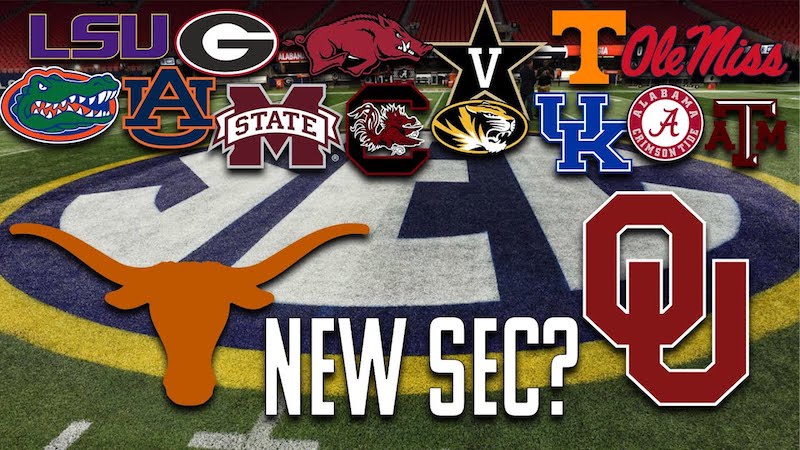 When the one great scorer comes to check the mark you made, it’s not about if you won or lost but how much money you’re paid.

My aged Uncle Mort said more than a mouthful the other day about shenanigans dictated in the name of intercollegiate athletics by high rollers in the world of televised sports. “The almighty dollar is even mightier than I thought.”

He hit the nail precisely. Big-time sports are far too big. We’ve drifted far away from their original status as one spoke in college and university wheels. Today in several institutions, “tails wag dogs.”

They’re talking “super conferences” now. The University of Texas has opted to join the Southeast Conference, the same league into which Texas A&M was accepted in 2012….

The Aggies and Longhorns–arguably “shoo-ins” when big-time football schools are separated from the rest–now are free to move about the country, already rich and getting richer.

Shed no tears for the fragmented “Big 12” league. (Mort opines that if it “stays hitched,” another name could be chosen, maybe “The Unloved Eight.” Should a couple of more schools depart, “The Big Half-Dozen” is a possibility.)

Mort remembers the old Southwest Conference, when a trip to Fayetteville, Arkansas, was Texans’ only out-of-state jaunt. Students at large (too often treated as “students at small”), players, parents, and fans could travel to most stadiums within a few hours, and coaches were remunerated in thousand-dollar increments instead of millions. A conference or state championship should be enough….

Am I suggesting that the remaining Big 12 schools choose reason over rat race?  Yes, but I’d lose the argument. Most large institutions will continue to stay on the money trail, letting TV call the shots.

Let’s think “what if.” What if institutions such as Baylor, SMU, and TCU decided to seek additional members–most or all from the Lone Star State–thus “reining in” sports?

More Texas students would have a chance to play sports, coaches wouldn’t make salaries dozens of times larger than all other university employees, ticket prices would be sensible, playing fields COULD be leveled and sportswriter Grantland Rice’s description of athletics would again apply. You know the words: “When the One Great Scorer comes to write against your name, he marks not that you won or lost, but how you played the game.”…

In what I’d call a more nearly perfect world, TV would no longer be judge and jury. University boards, administrations and faculty sports councils could be decision-makers instead of pawns, all committed to sports in perspective and truly level playing fields.

Generally forgotten in today’s intercollegiate sports world are the thousands of dedicated teachers who sometimes toil for 1%–or less–of head coaches’ pay.

Something is rotten not only in Denmark but in several “mega-universities” where institutional leaders–in effect—are constantly on alert to accommodate whatever directions are issued from the TV wheeler-dealers….

Such a dream won’t happen, partly because down deep, most sports folks in our culture don’t care about level fields. They could be muzzled, though, if rules truly meant something.

I really didn’t intend to get into the tall weeds on this topic, except to contend that lucre has never been filthier nor have playing fields ever been more unlevel.

Originally, I’d hoped to write about my uncle’s “current undertakings.”…

He–like tens of millions of others–is fascinated by the thought of upcoming rocket travel to the edges of outer space. Mort doesn’t figure he’ll ever have the “moola” to buy a ticket, but he’s looking into the price of flying standby.

One of Mort’s brothers, a farmer, never flew in a plane, much less a rocket. He did, however, once visit the Lubbock Airport, where his gaze locked on the departure board. He was shocked to see that a plane was scheduled to leave at 11:00 a.m. and arrive in El Paso at 11:05 a.m.

The agent asked if he wanted to buy a ticket. The farmer said “no thanks,” but believed he’d stick around just to see that plane take off….

Don Newbury is the author of Mostly Mort, a collection of humor and wisdom from his mythical uncle in the Big Thicket of Texas. Please click HERE to find the book on Amazon.