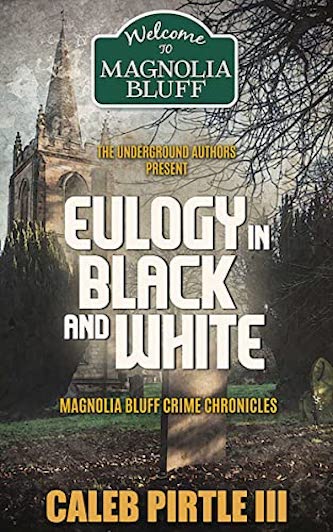 Review: Enchanted reading where everyone is exactly what they seem—only they aren’t—and someone dies every year on May 23.

In Eulogy in Black and White, Book 2 in the Magnolia Bluff Crime Chronicles, we meet the Friday morning circle of scalawags, reprobates, misfits, and the great unwashed are sitting around the back table of the Silver Spoon Café when I walk in and grab a chair beneath an image of Elvis printed on black velvet. Everybody’s thinking. Nobody’s talking. They’re wading through shallow water with deep thoughts.

These are the official, card-carrying sweaters of a town that sweats a lot. They are farmers, ranchers, hunters, fishermen, politicians, merchants, bankers, lawmen, and an occasional member of the Fourth Estate.

They sweat about the price of cotton, the price of wool, the price of gasoline, the sale price of cattle down at the auction barn, the rumor that a big box store is coming in to close downtown Magnolia Bluff, the war in the Middle East, rampant immigration that’s a little too close for comfort, killer hornets, drought, flash floods, lightning strikes, the new blonde divorcee who’s giving facials and makeup tips down at the pharmacy, and things that go bump in the night.

Two pairs of eyes cut through me like a hot butter knife dropped in a bucket of hog lard when I sit down. One pair belongs to the jovial Buck Blanton. He’s grinning, but it’s a surly grin, the same kind you see on a bear just before he takes the top of your head off with a single swipe of his paw. Buck’s grinning like he just found a new lawbreaker that needs a good shooting.

The other pair has been known to slice up smart aleck, out of town, big-city lawyers who believe they can swagger into the Burnet County Courthouse and run roughshod over a soft-voiced, mellow-faced, over-the-hill district judge who’s too thin to cast a decent shadow but earned a silver star flying a helicopter across the Mekong Delta in Vietnam. Won’t talk about it. I asked him.

Judge Abner J. “Peashooter” Peacock would rather talk fishing. The only thing he likes better than hauling big mouth bass out of Burnet Reservoir is throwing two-bit criminals in jail and sending six-bit criminals to prison. Never sent anybody to the death house, but he says he’s hanging on until he gets the chance. He tilts his wire spectacles down on the end of his nose and looks at me like his long wait is about to pay off.

Buck breaks the silence. “What are you trying to do?” he says. “Get me fired?”

“What are you talking about?” I’m not about to offer a defense until I know exactly what I’m defending.

“Don’t write news stories.” Lorraine taps my arm, reaches over my shoulder, and pours me a cup of coffee. Black. No cream. No sugar. At the sacred circle of scalawags, reprobates, misfits, and the great unwashed, neither cream nor sugar is allowed. Drink it the way God invented it or go somewhere else and see how tough you feel with Mocha or Frappuccino on your breath.

“What you write is a bunch of unmitigated crap.” Buck is chewing on coffee grounds.

“Won’t argue that point,” I tell him.

“Has no business in the newspaper.”

“All I wrote were the unmitigated facts, Sheriff,” I remind him. “The only thing I left out was you chewing on a lollipop and the justice of the peace roaring into a crime scene wearing his striped pajamas.”

Barron Schiff snickers. He presides with a certain amount of dignity and solemnity over the downtown funeral home and wedding chapel. He gets you coming and going, and you can buy both at a serious discount if you pay upfront and pay for both at the same time.

Phineas Henry laughs out loud. He sells a wide assortment of cheap perfumes, colognes, vitamins, hand sanitizers, and body lotions, along with your usual assortment of under-the-counter and over-the-counter pills, erection stimulators, and condoms down at his pharmacy, next door to the First National Bank. Nothing illicit or illegal but a few personal items you’d rather not be seen carrying in anything other than an unmarked brown paper bag. You need plausible deniability if you’re caught, and you almost always are.

“My Lord, Buck, what in hell were you doing at a motel shooting with a lollipop in your mouth?” Xander Littleton wants to know. He’s barely thirty with curly hair and eyes the color of burnt cocoa.  Denim jeans a little too tight. Khaki shirt tucked in behind a leather belt held together with a World Championship Rodeo belt buckle. Probably bought it in a pawn shop. His alligator skin boots have pointed toes, the kind that are good only for going after water bug in the corner of the room. Xander thinks more highly of himself than the rest of us do, but he doesn’t mind. He wears a badge and keeps it shined with bath rag saturated in Orange Glow. Xander works for the fish and game department and spends most of his days running a power boat from one end of Burnet Reservoir to the other. Keeps it safe. Keeps the fish under control. We haven’t had a fight amongst the largemouth bass since he got here. He came in feeling his oats this morning. Took a couple of shots at a couple of poachers. Didn’t hit anybody, but, Lord, he loves to hear the noise when that pistol of his goes off.

“It was a Tootsie Roll Pop,” Buck spits out. He’s breathing hard. Sounds a lot like a boar hog snorting when he’s in a chain-link cage and can’t figure a way out.

“Well, hell, Buck,” Dr. Michael Kurelek says, “that makes all the difference in the world. We just didn’t know if you were sucking or licking.” He’s a big man, tall and strong, likes to kill things if they’re four-legged and wearing antlers, and he teaches psychology over within the liberal confines of the Burnet College of the Arts. Dressed the way he always is: tie loose, top button on his white shirt unfastened, sleeves rolled up. Not a hair is out of place.

The laughter is genuine but nervous.

The forever grinning Buck Blanton has a low boiling point.

And I guess I lit the fire.

He’s not boiling yet.

But his eyes are smoldering.

Buck’s fists are clenched and tattooed with scars from stitches as crooked as blue lines on a West Virginia state map. His fingers, I’m told, have been broken twenty seven times by drunks, domestic disturbers, hijackers, deer poachers, whiskey runners, and a misplaced beer bottle or two thrown by a jealous husband or two.

If you’re in a fight with Buck, only let him hit you once. Go down and lie there. Don’t whimper or wail. If he hits you a second time, he may well kill you. Won’t mean to. Just can’t help himself.

Judge Peacock leans across the table and places a small, wrinkled hand on top of Buck’s knotted fist. “Gentlemen,” he says, “let’s cut Buck a little slack.” His voice is so low we have to strain to hear him above the sound of the ceiling fan. “Long night. Hard night. You might think the sheriff is a little upset. He’s not. Not really. Buck doesn’t have a short temper. He just has a quick and a potent reaction to bullshit.”

The laughter is churning inside us.

We’re simply too ill-at-ease to turn it loose or let it out.

The judge is not finished yet. He turns his head toward me. “And, Mister Huston,” he says, “you know, and I know, and everyone here knows that the piece you wrote in last night’s Chronicle was pure sanctified, justified, and glorified bullshit.” He pauses, and the faint wrinkles of a smile quiver as they touch the corners of his mouth. “What you wrote was wrong. It sheds a bad light on our community, on our law enforcement officers who, by the way, do an awfully good job of keeping our little town safe. It even casts shadows of suspicion and doubt on our justice system, and, sir, when you tamper with our justice system, you are working your way onto my bad side, and that is not a place you want to be. I am not too different from our esteemed sheriff. Like Buck, I have a quick and a potent reaction to bullshit, and neither one of us is known to forgive or forget in a man’s lifetime. It may take us months. It may take us years. But one of these days, we will get even.  However, Mister Huston, let me be the first to say out loud and in public that what you wrote was damn good bullshit.”