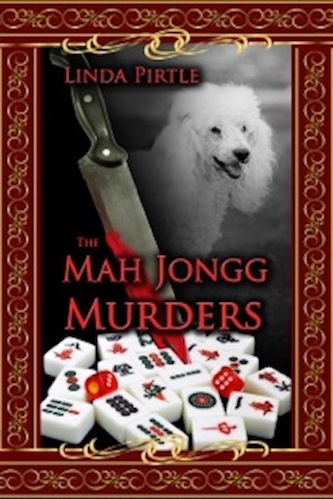 Why are people suddenly dying inside a quiet, peaceful gated community? What secrets are hidden there? You never really know people nearly as well as you think you do. Some of their secrets are deadly. Read an excerpt from The Mah Jongg Murders.

THE MOMENT LILLIANPrestridge saw the standard poodle running up the hill, she tuned out her husband who was reading from their current devotional book. She stood, walked to the railing of the front deck to get a better view, and wondered why the owner would ignore leash laws and allow his dog to run loose in the neighborhood. Then, she quickly chided herself. Perhaps, the dog simply got away from his owner. She whistled, and the dog changed direction and ran toward her house. He stopped at the end of the driveway and waited for her. The dog whimpered softly as she approached him.

She chuckled at the sight of the dog, leash in his mouth, walking himself. That is, until she spotted the hair on his face and chest. Both were smeared with blood.

She knelt in front of him. “What’s wrong, buddy? Where’s your owner?”

Immediately, the dog began barking. He turned and trotted a few paces away. Then he stopped, looked over his left shoulder, barked, ran back to her, wheeled around, ran another few feet, stopped, barked, came back.

Lillian looked up at the deck. Her husband Bill was peering over the rail. The dog continued to bark.

“Come out here,” she commanded. “I think this dog is trying to tell me something. Let’s follow him and see what’s going on.”

Bill yelled down from his perch on the deck. “What? What did you say?”

“Don’t ask questions.” Lillian realized he could not hear her over the louder and more frantic barks of the dog, so she beckoned for him to come down toward her.

When Bill reached the end of the drive, Lillian motioned with

The dog repeated his barking, running away, returning and

“See. He is trying to communicate with us.” She looked down

The dog took off in a dead run. Lillian and Bill struggled to

keep him in sight. He led the couple down the hill and toward the dam at the end of the small fishing lake. He began to whimper again. He dropped down and low crawled toward a figure lying near the edge of the lake. He sat up and howled.

Both Lillian and Bill pulled up short at the sight of a woman’s body. She was on her stomach, face turned away from them. A pool of blood seeped from beneath her chest. Lillian walked around to see the woman’s face and knelt by the body. She reached out, picked up a limp wrist to check for a pulse. There was none.

“Don’t touch her, Lil. I’m going to run back up to the house to call security. You stay here with the dog and try to comfort him.”

She didn’t touch the body again but began to look around the area in search of clues that might tell her what had happened. She found no traces of a struggle. There were numerous footprints, including hers and Bill’s, but since the dam was part of a popular trail where people came either to fish from the pier or to hike, footprints didn’t help much.

She led the dog over to a bench near the pier and sat down to wait for help to arrive. She pulled the dog close to her and looked at the tag on his collar. “So, your name is Eli. I’m so sorry, Eli, that someone you love has been hurt. Don’t worry, buddy. I won’t let anyone hurt you.”

As she and Eli sat side by side on the bench, it suddenly occurred to her how quiet everything was. She concentrated on the sounds she should be hearing, sounds of nature. Nothing. Usually, during the early morning, she could hear the harmonious symphony of the cardinals, blue jays, house wrens, and mockingbirds that gathered around the lake.

Lillian sighed. She stroked the dog’s head which he had placed on her knee. She looked at the lake. Perfectly still. Not one wave rippled toward the bank. Then she saw them, the dreaded evil turkey buzzards. Circling. Circling. Descending slowly on the other side of the lake. Lillian shivered.

“I just hate those things.”

Eli looked up at the birds and emitted a low growl.

“I understand, Eli. You don’t like them either.” Lillian was relieved to see Bill.

“Emergency should be on its way,” said Bill as he joined Lillian on the bench. Exhausted from his run up the hill, he took a deep breath. “That hill gets steeper every time I walk it. I guess I’m out of shape.”

“No, dear,” Lillian said, “you are in great shape, but as I recall, this is the first time you’ve ever run up the hill instead of climbing it leisurely.”

Sirens could be heard as security and the ambulance hurried to the scene. Now, all of Leisure Lake knew that something was amiss in an otherwise peaceful community.

GRANT PERRYMAN, LEISURE Lake’s Chief of Security, enjoyed his slow-paced job. Once, he had been in excellent shape. He had played college football for Sam Houston State University where he received his degree in Criminal Justice. After college, Grant had joined the Dallas Police Department. He had grown weary of the politics of the city’s judicial system and had returned to East Texas and secured his current position.

Now, Grant was more than a little overweight, and his thick black hair showed streaks of gray. He scowled when he saw Lillian sitting on the bench. Should’ve known she’d be right in the middle of whatever’s going on.

Grant heaved himself from his patrol car and trudged over to the dam. He walked straight to the body and squatted down, and without touching the corpse, he visually examined it for foul play. Grant took a small notebook from his front shirt pocket and began to write.

Note: Check to see if earring is in the other ear. White blouse.

Gold chain around the neck.

Could there have been a pendant? No shoes.

The local paramedics arrived on the scene less than five minutes after Grant. He looked up and recognized the older medic Thomas Matthews.

“Hello, Tom. You must have been close by to get here so soon.”

“We came as quickly as we could,” Tom said as he walked toward the body.

“Yes, sir, I see,” said Tom Elder who drew up short when he realized her condition.

“Have you called the justice of the peace, yet?”

“He’s on his way. Should be here in less than thirty minutes. When I called him, he was on his way to his son’s little league game.” “Good. We’ll be glad to help you any way we can while we wait.”

“Ten-four. Two of my security guys are on their way.” He glanced up at the onlookers who were beginning to congregate on the road at the entrance to the path leading down the hill to the scene.

“But it will take them at least ten minutes to arrive.” He nodded toward the group. “Could you make sure they don’t enter the trail. Need to contain the area.”

“Yes, sir.” The two men headed off to comply with his request. Grant put his hands on his hips and gazed out at the lake. The rays of the sun pranced over the tops of the waves as they sashayed their way to the pier and introduced themselves to its support beams. He took a deep breath, turned around, and studied the face of the beloved mother of his childhood friend, Jake. When Grant’s mom died at the early age of forty-five after a long fight with cancer, it was Lillian to whom he had turned for comfort. When he reached the bench where she waited, he sat down and took her hand in his.

I see that far away look in your eyes and I know what you’re thinking.

He spoke gently. “Lillian, are you okay?”

She nodded and looked at him. Grant recognized the pain in her eyes. Those clear blue eyes revealed more. They were resolute and determined. He was overwhelmed with a dread that was almost palpable. He understood Lillian would not rest until the mystery of the woman’s death was resolved. I don’t know how in the world I’ll be able to keep you out of the investigation. I’d never forgive myself if I allow you to be hurt.

“Have you or Bill touched anything?”

Lillian responded in her most businesslike voice, “I touched her wrist to check for a pulse, and then Bill ran back up to the house to call you. I see the ambulance came, too, but I think it’s too late for the ambulance, don’t you?”