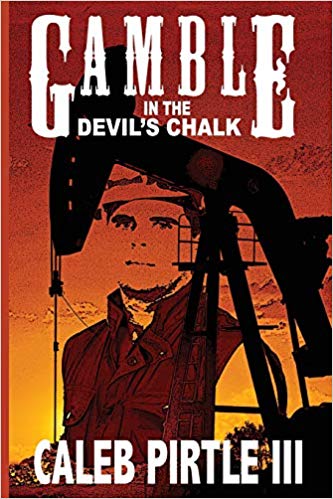 The oil strike became Fayette County’s most productive ranch property since Miss Edna and her girls departed a shuttered the best little whorehouse in Texas.

An excerpt from Gamble in the Devil’s Chalk.

During the summer of 1978, even though he had struck two major wells far to the north, Pat Holloway turned around and began a journey into the unfamiliar lands lying south of town on the road toward Fayette County. La Grange, only a couple of years earlier, had served as the home of the storied and notorious Chicken Ranch, a brothel of good standing that was frequented regularly by students from Texas A&M and The University of Texas, as well as by state senators and representatives who needed a quiet, intimate place to freshen their minds and sharpen their wits when the legislature was in session.

The profession of prostitution in LaGrange could be traced back to 1844 when a widow came to town and settled down in a small hotel with three young women from New Orleans. Unfortunately, during the Civil War, the madam and her girls were chased out of town and branded as Yankee traitors. Miss Jessie Williams revived the business in 1905 when she bought a small house of business on the banks of the Colorado River. She admitted politicians and lawmen, but drunkards never made it past the front door. During World War I, prostitutes dutifully and patriotically mailed packages and letters to soldier boys fighting on foreign shores, and the sheriff was known to hang around every evening to pick up information about criminals who had a propensity for visiting the whorehouse to brag about their deeds and misdeeds.

When the economic pain of the Great Depression began hovering ominously over the country, the parade of gentlemen callers seldom knocked on Miss Jessie’s door, and her girls were suffering from hunger. She fought the hard times her own way. She began the “poultry standard” for her house with a new piece of internal legislation that charged one chicken for one screw. The girls were never hungry again, and Miss Jessie managed to supplement her income by selling eggs to the good citizens of La Grange. From that moment on, her house was forever known as the Chicken Ranch.

When Miss Jessie grew old and feeble, Edna Milton arrived to take charge of the business, and she ran the brothel with an iron hand. She walked the hallways at night, and if she heard someone abusing one of the girls, she ran him out of the establishment with a metal rod for a weapon. Miss Edna gave money to the civic causes of La Grange, and she was recognized as the largest philanthropist in town. Soldiers joined college students and legislators in the lobby and backrooms of the business during the 1950s, and one nearby military base even arranged for a helicopter to transport the men to and from the Chicken Ranch, which appeared to be nothing more than a whitewashed farmhouse alongside the Houston and Galveston Highway. For many, it was the end of a pilgrimage on their way to manhood. No cursing, smoking, or partaking of alcoholic beverages was permitted on the premises, and as near as anyone could tell, the establishment was earning an income of almost a half-million dollars a year.

In 1976, however, it all began to fall apart. A holier-than-thou consumer affairs reporter named Marvin Zindler, posing as a crusader from KTRK-TV in Houston, ran a week-long expose on the Chicken Ranch as if no one in Texas knew its name and reputation. He claimed that the brothel was guilty of taking its money straight from the bedrooms to pay off corrupt state and local officials. The adverse publicity persuaded Governor Dolph Briscoe to shut the doors of the brothel forever. By the time the law stepped up on the front porch of the Chicken Ranch to deliver his edict, Miss Edna and her girls were gone. She married, moved on toward the Sabine River, and opened up a restaurant, serving the best little chicken in Texas. The business was similar. Only the side dishes had changed.

Pat Holloway, a rebel who didn’t really need a cause, decided that the well he was spudding in on the outskirts of La Grange should pay tribute to Miss Jessie, Miss Edna, and the legendary house of ill repute. He named it the Chicken Ranch No.  1. Holloway had originally thought about naming the well after the landowner, who had one of those hard to pronounce and even harder to spell Czech names. “I knew oil people would never be able to write it correctly on a run ticket,” he said. “So I called it the Chicken Ranch No. 1 for luck, “

There was nothing subliminal about it. And, no, it was never intended to be a monument to any underbelly exploits of Pat Holloway’s past. The well brought him luck all right. Bad luck. His Humble Exploration crew reached the total depth of the well and ran a log. There were no shows, no signs of faulting, no bulges in the formation, nothing but those dastardly straight lines that looked like a railroad track bound from nowhere to nowhere without any detours along the way. Holloway was devastated. As he pointed out, “Under normal circumstances, you wouldn’t have even bothered to set pipe if you’d looked at the log. You would have plugged the well, gone off, and left it. If I had shown the log to my partners, they would have voted to forget it and go on.  It was always better to bust a little than bust a lot.”

Ray Holifield was not nearly as concerned with the data. He had seen those same railroad tracks before on the logs at drilling locations he had selected for U.S. Operating and Windsor Energy. The straight lines had fooled him the first time. They couldn’t fool him again. “There’s a fault down there,” he said with a nonchalant shrug.

“How do we get the oil to the surface?” he asked his geologist, Ray Holifield.

“We’ll set pipe on the well and frac it.”

“That’s a helluva gamble to lose.”

“If you walk away, you’ve already lost.”

Pat Holloway put his trust in Ray Holifield. What else could he do? His options were limited, and his geologist had not failed him yet. Even the disappointing Perkins No. 1 would give back enough oil for them all to break even. He no longer felt like an attorney. He felt like a juror, who judged guilt or innocence with a single decision. He had a single decision to make. “Let’s take it down,” he said.

By early September, mud and water had broken into the fault, the frac had done its job as advertised, and the Chicken Ranch No. 1 was, in the words of Pat Holloway, a real barn burner, becoming Fayette County’s most productive ranch property since Miss Edna and her girls departed a shuttered whorehouse. What the test gauge revealed was staggering. The well had the potential of thirteen hundred barrels a day.  Holifield had been right. Why, Holloway wondered, would anyone dare to doubt him?