The Specter of Seduction by Carolyn Haines 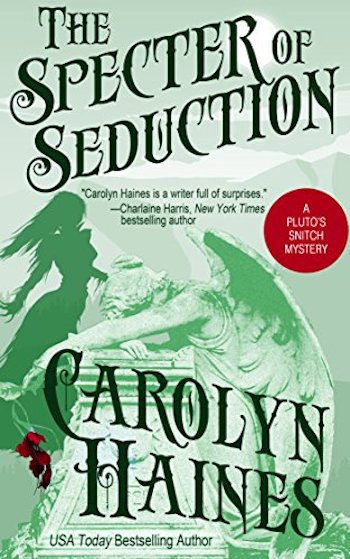 The past is deftly woven into the present revealing spies, earlier demonic possession, and debauchery.

Waverley Mansion, a unique and lovely antebellum home in northeast Mississippi, offers the most dangerous challenge yet to Raissa James and her partner in the Pluto’s Snitch private detective agency. They specialize in hauntings, possessions, and the occult.

In the isolation of Waverley, Raissa’s special gift, her ability to see and communicate with the dead, puts a target on her back. The entity that resides at Waverley Mansion covets Raissa’s sensitivity. But Raissa is not the only one in danger. She and her partner Reginald Proctor must save eight-year-old Amanda Sheridan from the dark forces roaming the grounds of Waverley.

The bitter past plays a major role in the nightmare of the present—and Raissa and Reginald must find the answers to who—or what–was Nora Bailey, a woman reputed to be not only a Union spy in the heart of the South, but also one whose promiscuity put the men who loved her at risk.

Raissa and Reginald can trust no one—especially not the dead–because the dead lie.

Raisa and Reginald, who are trying to get back home, are once again diverted from their return by a cry for help from a family in the midst of a first-class haunting.

The family lives in a Civil War era mansion which has a reputation for an evil presence with an amazingly seductive aura. Several entities, both human and ethereal haunt this family. Even Raisa is endangered, learning she is quite vulnerable to the powerful spirits and subject to their control.

The setting is creepy and fascinating. As the history of the house and its original owners are revealed we clue into who is haunting this family. The past is deftly woven into the present revealing spies, earlier demonic possession, and debauchery.

Raissa and Reginald’s friends and family, never far from their thoughts, are reintroduced as they come to the rescue. I love the Southern gothic flavor and the unexpected, yet skillfully wrought, twists in the mystery. The team’s prowess as hunters of the supernatural is growing, yet still undeveloped. Especially fun is that Haines leaves us knowing there is another adventure on the horizon. A really fun read!

I loved this book! The story is so well-planned, that I thought I had it all figured out early. And I couldn’t have been more wrong! I thought that the lady who had always been in love with one of the brothers killed a person, and had the important key painting to solving the mystery, hidden in her house.

I thought that Nora was really a “bad seed,” with occult help recruited for her sneaky endeavors, and playing as a “Jezebel,” was a game played just for spite. And I really believed that the child ghost might be evil, and controlling and that the horse was most likely possessed.

And I also suspected that the new hired hand shot a young man. And, I even suspected the sheriff and the politician, as wanting to stop the politician’s son from getting into trouble occasionally, and wanting to stop bailing him out of trouble once and for all. Then…SURPRISE!!! The author got at least five good ones over on me! (More than ten, if you take all of my wrong guesses into account!)

This is definitely one of the best, if not THE BEST mystery, that I have ever read!!! And I thought the author’s “Bones,” and “Trouble,” books were awesome, but this one blew them all away!!! Kudos! Well done! I was completely sideswiped, and I didn’t have anything guessed right–I even believed that one of the daughters had been possessed, or set up when rumors flew that she killed her own daughter…WOW, was I wrong on all accounts!

And, author Carolyn Haines, managed to wrap it all up in one great big beautiful bow at the end! Congratulations, on a mystery to top all mysteries! Kudos! I will definitely be looking for more books in this series, it was deliciously suspenseful, and well-designed and planned! Thank you, Carolyn Haines, for writing such a great mystery book!

Please click HERE to find Specter of Seduction on Amazon.