A Short Story: Always a New Year in a New Town

She and mama were always running. But she could still hear them. Footsteps in the night.

The world was new again as if freshly born.

Mama said yesterday should be forgotten.

She squeezed her eyes tightly.

She ran as hard as she could.

She and mama were always running.

But she could still hear them.

Footsteps in the night.

And the little girl could smell his breath.

Mama said he was gone.

Mama said he was somewhere behind them, somewhere in yesterday, and he would not be coming anymore.

The little girl kept looking over her shoulder.

She didn’t see him.

But she knew he was near.

Yesterday she thought she saw his reflection in the window of a department store.

And her mama held her until the tears all ran dry.

Here we are, mama said.

She wasn’t use to seeing her mama smile.

They were seated in a diner early on a new day in a new year.

The little girl was drinking milk.

The little girl had cornflakes in a blue and white bowl.

It was a good morning.

The waitress smiled at them.

It was a good smile.

“Time will tell,” she said.

But mama only smiled.

She thought back over the miles that trailed behind her.

Too many new days.

Too many new years.

Too many new names.

He always begged her to come back home.

He always beat her when she did.

She made up her mind.

This time it was different.

“Where you from?” the waitress asked.

“They had a terrible shooting up there,” the waitress said. “I saw it in the newspaper.”

“They found some man shot to death.”

“Name’s familiar,” mama said. “But Durant’s not a big town.

“It’s terrible a man losing his life right after Christmas.”

“Maybe he had it coming,” she said.

By nine o’clock, she and the little girl were on the bench outside the depot waiting for a train.

“I thought we were home,” the little girl said.

“The waitress was nice.”

“Then where are we going?”

“Some place where nobody’s heard about Durant,” she said.

“We’ll know when we get there.”

They rode all day and through the night.

When the little girl awoke, it was a new day.

In a new year.

In a new town.

She stepped off the train with a new name.

The faces were new.

The faces belonged to strangers.

But mama was smiling.

Life was always good when mama was smiling.

She had been smiling now for a week.

Caleb Pirtle III is the author of The Man Who Talks to Strangers, a Memoir of Sorts. Please click HERE to find the book on Amazon. 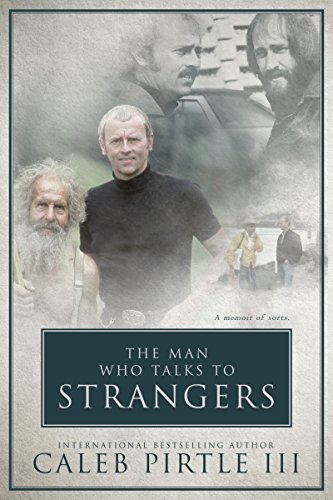