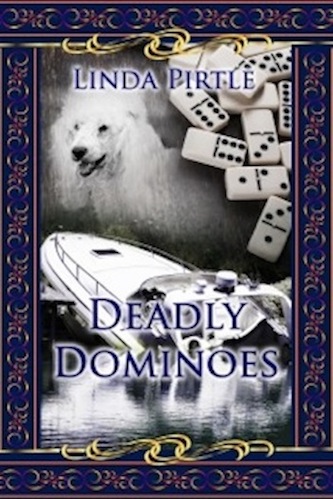 Read an excerpt from Linda Pirtle’s cozy mystery. Who is the person or persons leaving dominoes and notes on the bodies of one victim after the next? Everyone is a suspect.

Lillian stood outside Al’s window. For a few seconds, she heard the tail end of a news announcement then silence. “Shoot,” she muttered to herself, wishing she had heard the whole report. So much for being away from civilization. Cable service would be her first priority come morning. Then the room was filled with static. Al’s voice floated out the window.

A Ham radio. Odd. Lillian didn’t know anyone communicated with those anymore. Antiques, but effective and secure. She would have to remember to ask Al if he served in the military during the Vietnam War.

“Shadow here,” responded a female voice with a distinct accent.

“We heard an explosion.”

“A truck exploded from the Morningside Fertilizer Plant.”

“We felt the aftershock all the way out here. Where did the explosion occur?”

“What went wrong?” asked Al. “I thought we had a good plan.”

“You tell me,” Shadow demanded. “If your guys can’t do any better than that, we may not need your services in the future.”

“Now wait a minute, Shadow.”  Al’s stern response indicated to Lillian that he was not willing to accept the blame for a scheme gone awry. “Look, you can’t hold me or my men responsible. I told you we needed to wait.  You’re the one who couldn’t wait. You put everything into play too early.”

“Well, just don’t point a finger at me,” Al said. “How much damage was there?”

“Oh my God,” Al moaned. “That’s going to complicate everything.”

“Ten-Four on that. But, it might work out for us after all.”

Lillian heard a tap, tap. She sneaked a glance through the window and saw Al, pen between his fingers, flicking it back and forth against the top of his desk.

“Well, all the residents in Smithland and those in the surrounding rural areas are being evacuated to nearby Marshall until the fires can be extinguished.”

“Including everyone in Atlanta?”

“Yes. And both Texas and Louisiana state troopers have the highway blocked to through traffic.”

“I assume we are behind the blockade?”

Lillian remained beneath the window, trying to absorb what she had heard on the news.  Now, she knew what had rocked the Pavilion and ended an otherwise pleasant Friday night of dominoes. What’s so important that Al received a phone call this time of night?

She heard panting and looked down to see Eli. He, too, had sneaked to Al’s window. “Shh, Eli. Don’t bark.” She reached down to pet her loyal companion. “We don’t want him to hear us.” The dog sat, his nose sniffing the night air.

She heard, “Yeah?” Pause. “The first one made it? Good. Anyone else hurt?” Pause. “Well, at least half the mission is accomplished.”  He ended the call.

Mission? What in the world?  Lillian knew by the screech of Al’s chair and the sound of his footsteps that she and Eli needed to leave in a hurry. Before the office door opened, she quickly scooted out of sight taking Eli with her. “Shh.” She and the dog froze as Al walked out onto the small deck, bowed his head and stood silently for a moment before turning and stepping back inside.  He looked as though he were praying.  Lillian had heard enough for one night. She whispered to Eli, “We’re going back to bed before Bill wakes and realizes he’s alone.”

Lillian with Eli beside her walked back down the trail to her RV.  Before she could take two steps, Eli whimpered and with tail wagging took off into the woods. She stopped and softly called “Eli, come back.”

She heard a whispered “Good boy,” and then a man’s voice beckoned. “Lillian, over here.”  Lillian scanned the darkness trying to identify the owner of the soft voice. If whoever called her name were dangerous, Eli would have growled a warning. Besides, she reasoned, that dog doesn’t take up with people if he senses danger.

“Who are you? What do you want? How do you know my name? You’d better speak up quick, buddy, before I scream and wake up everyone in this campsite,” she bravely whispered back.